We Sweat Socially for the last time, and parting is such damp sorrow. We Kick Start Coffee for the last time, and don't say thanks a latte, because we're not that lame. There's a room full of Anchor Distilling drinks, but we don't linger as it's not even 11 am and we have not eaten. See, Tales teaches you many things.

We do shower up and get dressed for Beignets on the Balcony by William Grant & Sons. It's in the Sonesta, the other hotel housing many of TOTC's events, and you wind up wandering through a warren of rooms and indeed balconies overlooking Bourbon Street. This would be prized real estate for Mardi Gras, but on a rainy July morning even most of the vomit has packed up and gone home, making what will be party central in 10 hours look more like a neon-lit ghost town. 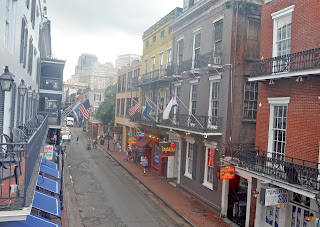 The beignets are good, the eggs better, the cocktails best, particularity an Opera made of The Balvenie 14 year old Caribbean cask (I told you to Sip That back in April), lemon juice, pear brandy, elderflower liqueur, simple syrup, and topped with sparkling wine. Think French 75 squared or something, a lovely brunchish pour. That event ends up being the end of our official Tales day, except for a quick trip to the top floor of the Monteleone, hoping for good things in the Interview Room. Instead we got this view--they need to buy some letters, Vanna, or perhaps someone has a hankering for the original Let's Make a Deal host. (The last sentence brought to you by the International Association of Game Shows.) 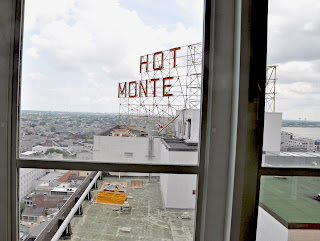 It's time for a crosstown adventure! First, if you opt to take the streetcars, and you really sort of have to, you can buy a pass before trying to board. Do that. (We didn't.) Second, get ready for too many people with the same idea, and a crush, and heat, and grumble grumble. But then it gets moving, and you might get to hear the operator crack wise, and you might get views like this as you head out into the Garden District. 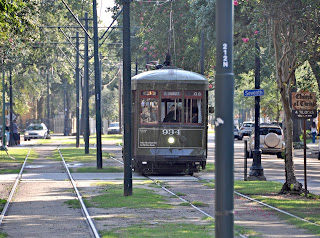 So it's all sorts of good. We decide it might be fun to wander about Audubon Park, so get off there and keep our fingers crossed that a typical afternoon rainstorm doesn't let loose on us. The first part of the park is still very much in its original Olmsted design, and so so much green to confront folks like us living in rain-starved southern California. 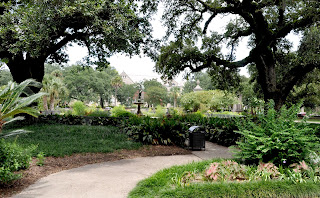 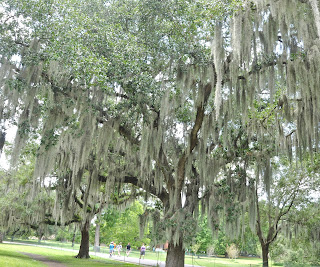 That beats both Randy and Kate. We end up walking all the way from St. Charles to the Mississippi, around the zoo which we decide not to see. As for the park, it's an impressive taming of nature with equally impressive houses of the rich alongside. You know, America. It is a long walk, and everything past Magazine St. is far less scenic (the Olmsteds mustn't have been paid for that part) and very treeless. It is not sunless. We are not sweatless, even with mighty clouds like this. 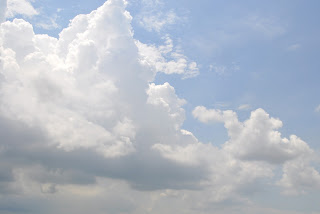 Note, too, the river is intimidatingly wide and hinting at its real use as a highway and not something one should particularly romance. It's easy to agree, however, it's nicknamed well--that's about as unclear as water can be, Mighty Muddy M. That could be something jumping out of it, too. 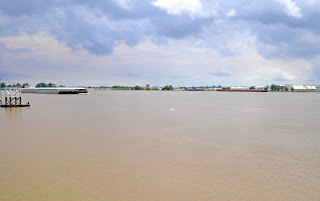 We start the long hike back to Charles St., and get to see these critters along the way. 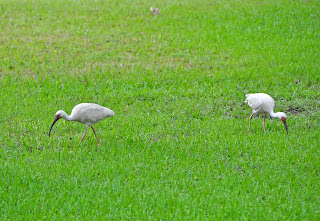 Being us, and given half of us is Chryss, we're nowhere near done walking, despite needing food and drink, and by drink we mostly even just mean water, so you know this was a long walk. We cross St. Charles and head for Freret, which, of course, we call Ferret, because the furry devils need their own street. Our goal is what often gets called the best craft cocktail bar in New Orleans--Cure--and we get there right as they open at 3, so luckily we do not enter crying, even though our tears would probably have been hidden amidst our perspiration. They let us in anyway.

There is the tiniest bit of 'tude here, but they seem to deserve it as they make outstanding cocktails and are just friendly enough. They describe their own creations by comparing them to a drink theirs is sort of like, to give you a handle of where to head. So I get a Sweet Leaf that's a cousin to a Corpse Reviver #2 that is divine and Chryss has an Irish Goodbye, which is described as follows: "Perfect for a hot day, this restorative Irish whiskey sour has notes of peach, mint, and green tea." 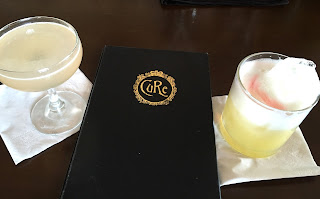 We also hunger, and get a bar snack platter of olives and crudite and a pimento cheese spread that makes me wonder where pimentos have been of late. I will be having more. To do further cocktail research--I am a journalist, after all--I have a second drink, this time an Alaska (what more could one want on a hot day), made of City of London Gin, Yellow Chartreuse, Regans' Orange Bitters. Perfect simplicity. (Another big Cure plus--despite being one of the town's hot spots, most drinks are just $10. Put them in LA or Santa Barbara and their creations would cost at least $15.) 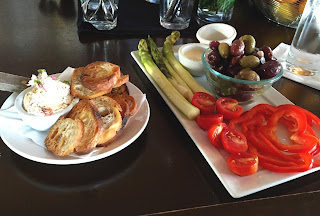 Chryss does some internet sleuthing and discovers that Bar Frances, just down the street (this stretch of Freret is particularly hip right now) is supposed to be something, so we decide to go there too. Hey, we missed lunch, don't judge. It's quite pleasing, too, and our waitress here turns out to be from Santa Barbara, of course. Happy hour Marcona almonds for three bucks are saltily nice, and I order a Boulevardier cocktail as I like the way it throws whiskey into a Negroni, or perhaps it throws Campari into a Manhattan. That is, it's almost so many other drinks but really only itself. Chryss goes for a local microbrew for the name as much as anything, Southern Prohibition Brewing's Jack the Sipper ESB. It reminded me what a pleasing style ESB is, but of course, the English just don't hop enough for us Americans.

I do not know, by the way, why I have no photos of this chunk of the day.

We work our way back to the streetcar and take it back to the Quarter, passing all the ornate houses that make much of the Garden District seem like a set for a Southern Gothic soap opera--These Are the Days of Our Columns. (I hope that's suggestive enough.) Somehow I can't remember at this point if we go straight to the dinner we've been slowly building to with drink after snack-accompanies drink, but it seems as good a way to experience New Orleans as any.

Dinner is far from glamorous--it's the walkup window of Killer Poboys, think of it as a food truck parked permanently in the back room of the Erin Rose Bar. You can't have too many poboys, and they also mean you get to eat cheap. Chryss goes for the Seared Gulf Shrimp with marinated radish, carrot, cucumber, herbs, and special sauce while I go for their famous “Dark & Stormy” Pork Belly long-marinated and re-brushed with NOLA rum ginger glaze and topped with lime slaw and garlic aioli. These are incredible flavor bombs and go well with some southern beers from the bar up front.

There might be time for a nap. Because at 8 we meet our wonderful neighbors from SB, who just happen to be in New Orleans for one night only, and they're booked for the Ultimate 5-in-1 Haunted Tour Experience with the Voodoo Bone Lady. Given these are our neighbors that also take Halloween seriously in ways that might scare others as they decorate their house so well people come out of their way to see it, of course nothing could be better than to do a ghost tour with them. It's practically research. 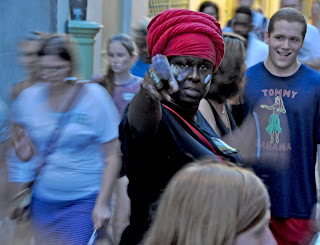 Guess who? She's an incredible story teller, which is just what you want for something like this, because while the Quarter can seem spooktacular--most of the buildings are hundreds of years old, the gas lamps flicker, even for rent signs advise whether a condo is haunted or not--the scariest thing you'll probably see is some 21-year-old chucking up his fifth Hurricane.

You do get touchdown Jesus, who supposedly helped the Saints win a Super Bowl. Or, perhaps, it just helps make Christianity creepier than it is in towns that aren't in no small part built on the slave trade. 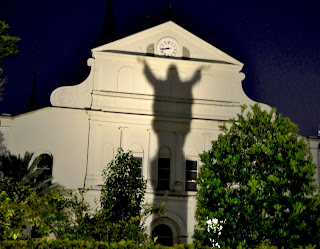 We do get a drink/bathroom break at Lafitte's Blacksmith Shop Bar, to get our pirates into the story, of course. It's supposed to be the oldest building used as a bar in the U.S., a couple of decades before we were the U.S. It is wonderfully ramshackle and creepy and candlelit except for the video poker machine or two. I mean, you can't ignore all uses of electricity. Oh, did Lafitte really having anything to do with this spot? We don't know. But if we claim it, and keep the corners properly in the shadows, anything can seem possible. 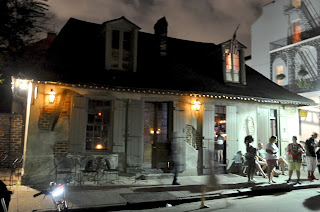 And, of course, the tour ends at the infamous LaLaurie House that American Horror Story made a national, overly graphic excuse to see if Kathy Bates could over-act more than Jessica Lange (was tv-watching America winners or losers, you decide). You know, the usual torture the slaves thing for your own sadistic thrills. And then, the house supposedly wasn't too welcoming--even one-time owner Nicolas Cage found the power of the haunting, even if it used the IRS to get him. We don' see anything spooky here, even in our photos. But the stories are terrifying enough. 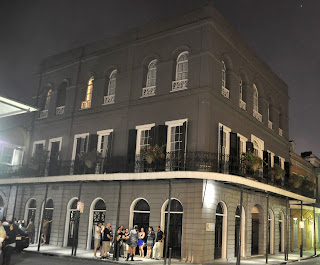 So much so after saying goodbye to the neighbors, who are visiting with their teenagers, we decide we need a nightcap and return to Kingfish from our first night in town. I have to have that First Word again, it was so good. Less good are the other, of course younger, people at the bar who are so witty they must yell their bon-mots at each other, then laugh as if they learned how to do so by watching the cartoon ass on Hee-Haw. Even the people behind the bar are rolling their eyes, to the point they give us a drink for free, saying, "It took me too long to get you your drink." Now that's service. They do finally leave, and the volume change is almost like exiting the rock nightclub and suddenyl just hearing nothing.

Even better, our friend (thanks to our daughter) Laura Bellucci from SoBou is doing what bartenders do post shift, knocking back shots of Fernet-Branca, especially since one of the Kingfish bartenders is her beau. So we get to, on pretty much the last evening of Tales, join the honorary ranks of barkeeps ourselves. There's nothing bitter about this amaro in the slightest.
Posted by George at 11:19 AM