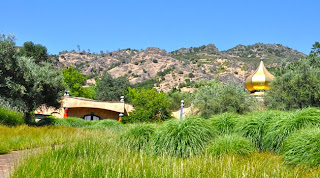 Nobody quite knows who put the petite in Petite Sirah/Syrah, since it's anything but; sometimes I like to think of it as the bastard love child of cabernet sauvignon and zinfandel after a night they both imbibed too much of each other. (I know it's probably related to the grape Durif, but that's a less interesting story.) Big, bold, dark, delicious, it's easy to see why it's often used for blends as it's almost too much: a true teeth-stainer and a testament to tannins and the vintners who tame them. For when you drink one like Quixote's 2005 Petite Sirah, you realize some wine has to exist to take on the deepest BBQ of summer.

Want to read the rest then do so at KCET's blog.
Posted by George at 6:44 PM No comments:

The Beer-Waiting Is the Hardest Part

I'm pretty sure it's not just since dining at the French Laundry that all service has seemed to go to pot. At the French Laundry, it's clear every possible moment has been considered; how that moment could go absolutely the best has been chosen (always accurately); that way is taught to every last person on staff; said staff manages to do that exact right thing every single time. That leaves plenty of places for service to go wrong in lesser establishments: most places just seem mindless; when they do figure out the right thing, it's often not part of training; if there is training it's inconsistent; and then the waitstaff might just not be able to, or care to be able to, pull it off.

For instance, it's been a thing lately--if two data points count as a thing--that servers fail to bring the second drink I've ordered in a timely manner. Now this might just seem like whining, but if the server asks when he or she leaves the food, "Do you want anything else?" and you say, "Yes, I'd like another beer please," you're sort of hopping that beer shows up to go with the meal just brought to you. And it's only been a draft--it's not like the drink involved muddling or flamed citrus or anything in the slightest time-intensive. I didn't order that second beer for dessert--the point is it will go well with my burger. Get that Ninkasi over here! This failure smarted even more at a place that usually has great service--well, at least your favorite server in town--and when you don't get her (she doesn't work every hour of every shift, sadly), things fall apart. At a place that makes its own beer, so you think would like to get you to drink it. Oh well.

These issues pale to the disaster that is the spot I called Mike Harkey in my complaint/rant about it two years ago. I guess you have to give it credit--it's consistent. Consistently infuriating. I met two people already there last night, hoping I, too, could get a cocktail, since, after all, that's what they do. Upon arriving another table empties, so we are the only three people in the bar (at about 7 pm, so no one should be too exhausted from a long evening of exercising their cocktail shaking muscles). There's no recognition that a new person has joined the table and might be curious to order. Then again, one of the people at the table has an empty glass, too, and for a good 20 minutes no one asks if she might like another cocktail. Finally we do get a waitress's attention and order. My drink comes without its signature candied ginger garnish. But why should I expect attention to detail when they can't even bother to do that "let's ask customers if they want to buy something" part of the business.
Posted by George at 8:00 AM No comments: 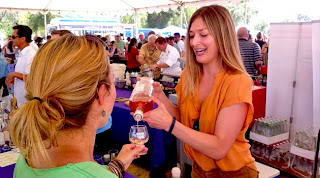 I'm trying not to think about the tender and scrumptious whole roast pig not too far from the undeniably adorable piggie petting zoo, and somehow that's possible as there are so many things from the barrel -- wine, spirits, beer -- to dull my thoughts, plus I'm insatiable when it comes to porky goodness. That's what life is like at Bacon & Barrels, a fundraiser for the Santa Ynez Valley Visitors Association held at Saarloos & Sons Field in Los Olivos on July 20th. Under the summer sun it's toasty, so one piece of advice might be to hold this shindig next year in the fall, when wine will sound even better than beer, although it's easier to make a bacon-y porter, like Stone did, than a bacon-esque wine no matter the weather. Still, there's plenty of delicious vinous goodness to be had, from favorites I've already blogged about here like Tercero and Press Gang, to others ...

If you’ve ever wondered how much shuck could a swallower swallow if a swallower could swallow shucks, you need to get to the rooftop of the Canary Hotel on July 28 for Finch & Fork’s first Shuck ’n Swallow competition. “Basically one person shucks oysters, and the other eats them — and the goal is to shuck and eat as many as you can,” explains the hotel’s general manager Reagan Corbett. “Typical winners in the other competitions [at other Kimpton-owned properties] have eaten upwards of 140-150 oysters in 10 minutes. There is a 10-minute qualifying after eating the oysters — if you get what I mean — gotta keep ’em down to win!”

Want to read the rest then do so at the Indy's site.
Posted by George at 5:00 PM No comments:

Email ThisBlogThis!Share to TwitterShare to FacebookShare to Pinterest
Labels: a start and a nudge, Finch and Fork, Independent, KCET, oysters, Shuck & Swallow

Baeball Wine: The Bags Are Loaded 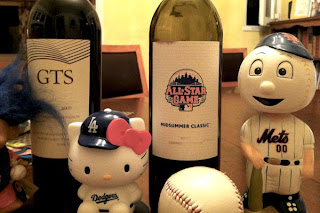 It's July and the pennant races are heating up, players like Miguel Cabrera, Mike Trout, and Yasiel Puig are wow-ing us with their amazing feats, and the All-Star Game is upon us. And baseball fans are thinking of wine. OK, that last part doesn't sound correct, as beer, even if it's $10 per commemorative plastic cup beer, is the drink most associated with not just the national pastime but pretty much every sport (is polo a sport? discuss). That said, some folks want you to think not just of Bobby Wine but wine itself when you think of baseball.

Want to read the rest then do so at KCET's blog.
Posted by George at 5:30 PM No comments:

A New, Yet Classic, Take on Mattei's 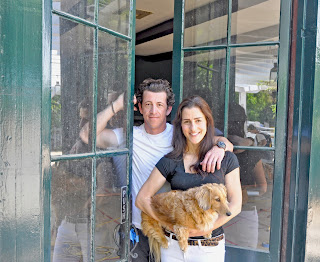 “We see this as an homage to the history of this area,” says Chef Robbie Wilson, one of the partners reopening the historic Mattei’s Tavern this month. “Like with a great rib eye, all you want to do is put a little salt on it; that’s what we’re doing here.” His wife and business partner, Emily Perry Wilson, adds that they’ve been doing a lot of research on Felix Mattei, the original man with a plan in the mid-1880s who leveraged the end of the stagecoach and dawn of the iron horse eras to make his name as a Los Olivos restaurateur and innkeeper. When Emily points out they painted the bar “a green color,” she quickly adds, “It’s a historic green.” So if people grumble about changes, it might just mean they aren’t old enough to know what the original Mattei’s was like. 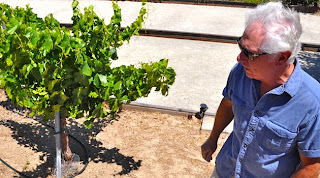 Here's a bar bet to challenge your friend who knows everything about music: What do No Doubt, Danny Federici, LA Guns, Santana, Kenny Loggins, and Tupac Shakur all have in common? Answer: Engineer-producer Denis Degher worked on recordings from these crazily diverse artists. After gloating, be sure that your friend pays up with some of Degher's wines -- for he's now making some of the best small production Bordeaux and Rhone varietals in Paso Robles.

Far from Frozen in the Past

We’re wearing dorky hairnets, standing in a historic building that once housed the Santa Barbara Live Oak Dairy, circa 1936. The spoons just out of our mouths, we’re enjoying our first tastes of fresh Mint Chip ice cream, straight from “The Spigot.” It’s America’s favorite family food. And what comes out of McConnell’s new owner Michael Palmer’s mouth is a delightedly enthusiastic, un-family-friendly “holy fuck!”

Masters of the Grilling Universe

More than 100 food-loving folks gathered around the picnic benches of Oak Park last month to witness The Santa Barbara Independent’s fourth annual Sizzling Summer BBQ Contest, which was easily our most exciting and cutthroat cooking competition yet. The June 13 event featured 13 chefs, both professional and amateur, eager to impress with a wide range of 15 delectable dishes in the three official categories: Professional BBQ Plate, Amateur BBQ Plate, and Pro-Am Vegetarian BBQ Plate.