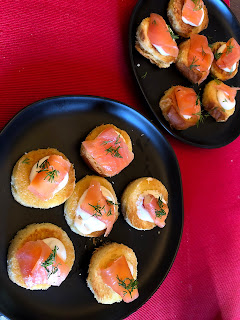 We finally got around to doing something we've always wanted to do, and I mean that two ways, as you soon shall see. To celebrate the season we decided to try to pull off a version of The Feast of the Seven Fishes. Of course it's odd to do this during lockdown, when the only ones feasting on the fish would be Chryss and me, but the most unusual of years deserves a fittingly strange fete. Note, while people like to act the Fo7, as I will be calling it, is something passed down from generations ago, as if Italian grandmothers smuggled heirloom recipes between their sweaty bossoms from the Old World, it actually started in the U.S. just over a century ago. What's more, if we were being traditional we would have done this on Christmas Eve, but we decided to make it a day's journey of seafood eating on Christmas Day itself. After all, we didn't have to worry about any of the non-meat-eating fasting pre-Christmas vestigial rules, not being dues paying Roman Catholic Church members, plus Chryss is pescatarian all the time anyway. Oh, and we opted to skip any course with pasta (too heavy--we've got all the fish to swim down our gullets!), or tomato sauce or even fra diavolo, and we opted to make it to seven seafood items and skip a seventh dessert course (panettone is just fruitcake with an Italian accent, you can't fool me).

The trick was coming up with a menu that was diverse enough and worked somewhat progressively, so we could keep eating throughout the day and spread out the food prep. That means Fish the First, was smoked salmon, the crazy good version from Cambridge House right here in Santa Barbara that Lazy Acres sells without fancy packaging by their seafood counter. You see that above, on little brioche toast circles Chryss artfully cut out and toasted in butter, as we figured this wasn't going to be indulgent enough otherwise. There's a dollop of creme fraiche below, a sprinkle of fresh dill above. Each one a salty, tender, creamy, bright bite. We were off to a good start. 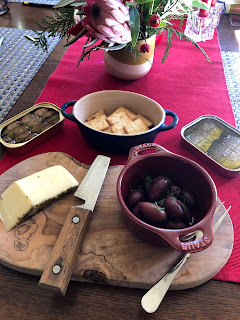 Keeping it simple, around lunch we toted out the tins. To the left (above) you see Fish the Second, smoked clams, and to the right Fish the Third, Jose Gourmet Smoked Trout fillets in Olive Oil. There's also some Asiago with rosemary for a creamy cut to all the oily fish, and some kalamatas for a snap of brine. Without a doubt the trout was the star here--my guess is it's best to do something with smoked oysters, not eat them "raw" as it were. But we got caught discussing whether to go dip or chowder and did neither out of ease. Not that we didn't consume them all. 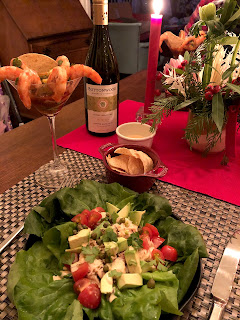 If you were beginning to think--gee, you really didn't make anything, did you?--let me introduce you to Fish the Fourth, a Mexican-style shrimp cocktail from a Rick Bayless recipe and Fish the Fifth, a crab Louie salad. That shrimp packs a kick, cooked and then marinated in fresh lime juice, to be finished with Tapatio and white onion and avocado and cucumber and cilantro and a jot of olive oil. And, yes, ketchup. The only approved use of it in our house. The crab salad had a bit of a kick too--some Sriracha in its mix of Veganaise and lime juice, and then tomatoes, capers, more avo(!) and Bibb lettuce. Given the preciousness of crab (both it's light if delightful flavor and that it was the most expensive per pound thing we bought) it was hard not to try to just eat all of that first and then enjoy the salad after, to be honest. This course was around Happy hour time, and it went perfectly with Buttonwood's unusual Hop On White, that's Sauv Blanc dry-hopped. So smells a bit like IPA, tastes like grapefruit and lemon. 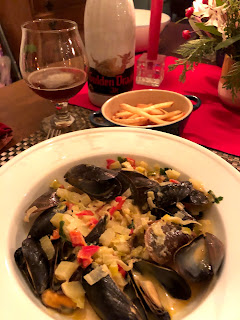 Fish the Sixth was mussels in Pernod cream, sauteed with leek, fennel, red bell pepper. The last of the Hop On went into the cooking juice we of course devoured with spoons after. Don't ask me how, but I forgot to put a crusty loaf of bread on the shopping list, but we wisely remembered we had Alexia truffle fires in the freezer, so heated those up and suddenly it was moules and frites. Perfect with the mightily potent Gulden Draak Belgian ale we'd been hanging out to for evidently just such a Belgian occasion. We really did not do the Italians proud with our Fo7, I have to shamefully admit. But we ate well. 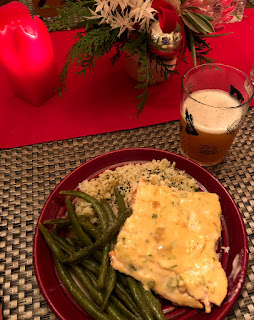 So well that we threw in the towel for the day. (A beach towel, given all the fish.) Fish the Seventh waited for dinner the next night, a gorgeous filet of Coho salmon that we did in very much a throwback style, adapting a recipe from Beverly Gannon's Family-Style Meals at the Hali'imaile General Store. That's what she calls a take on dynamite scallops sauce for sushi, again with some Sriracha, scallion, Veganaise, miso, splash of veggie stock. It's a rich kick and keeps the baked fish marvelously moist. Alongside are coconut-green-curry green beans and jasmine rice given a bit of added flash with cilantro stems, fresh ginger, and a spritz of black sesame seeds and dried seaweed (we actually bought in Ireland--don't tell the Italians, or the Hawaiians...) atop, too.

So we made it--seven fishes, four meals, two days. No apologies. Well, maybe only to the things that used to be a-sea but now are a part of me. I appreciate their tasty if unwilling sacrifice. And if we ever get to do this again with actual other people to feed too, there will be pasta.