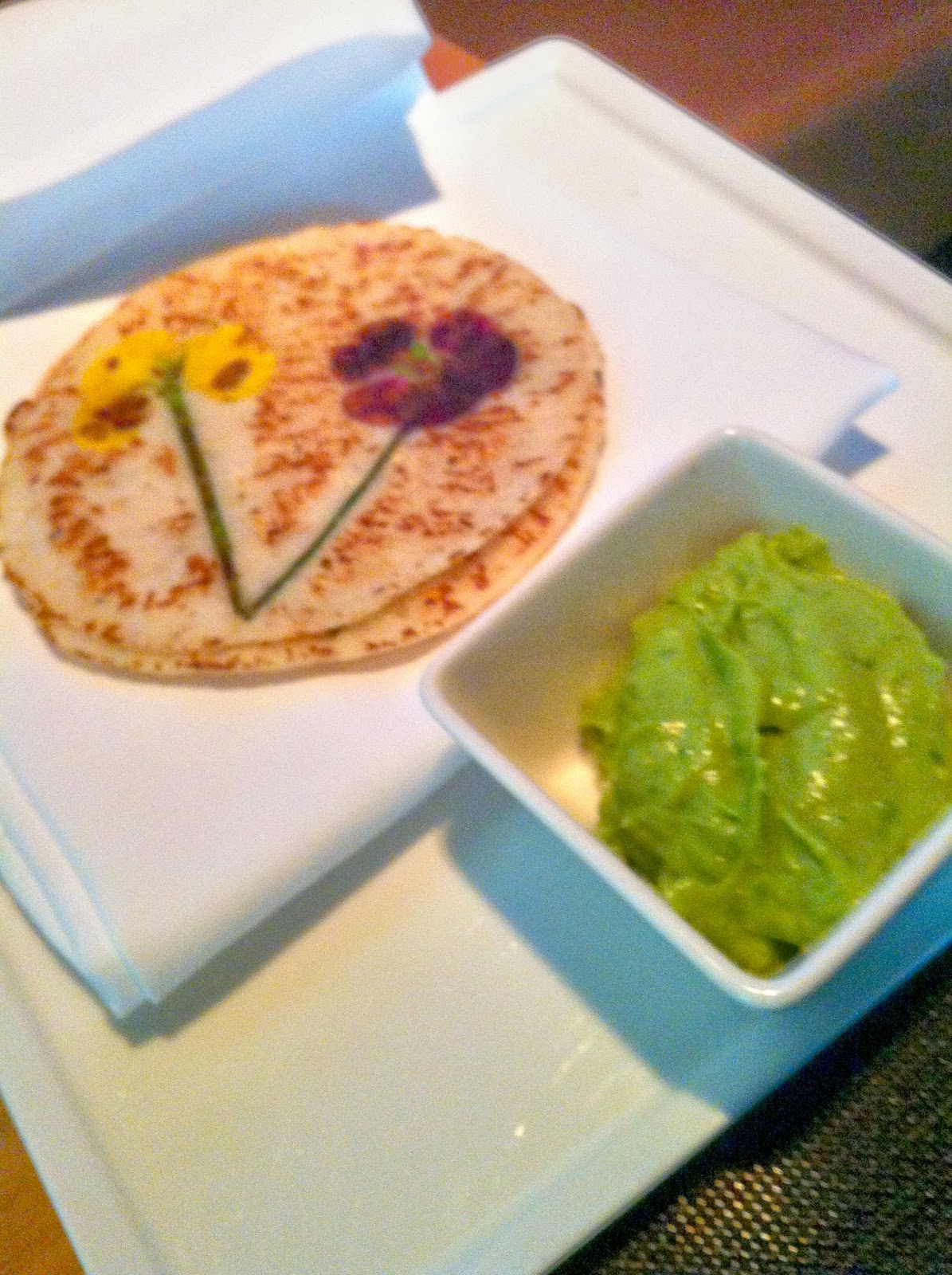 Chef John Sedlar must have had some weird and wonderful dream about dim sum carts morphing into food trucks based on what's happening at his Rivera in downtown LA. Of course, he's always been one to invent and re-invent, none-too-modestly naming his first book Modern Southwest Cuisine. Heck, he's been the driving force behind Museum Tamal, that's how seriously he takes this food, but it seems being serious also means being playful--just check out the edible flowers pressed into the tortillas above. (And that's Indian Butter, not guacamole, because it will be the richest guac you'll ever taste.)

So this is how it works--you can order off the menu, or you can get tempted by the waiters pushing about carts that don't just carry about samples but the actual stuff you can eat, right away. And so you will be tempted and quickly fulfilled, and nothing will entice more than the butternut squash tamal, perfectly cooked and if you get a bite of the pork shoulder and squash and goat cheese all at once you will come close to ordering a second even with your mouth full, all the flavors ricocheting off of and ratcheting up the other flavors.

Of course, Rivera is the kind of restaurant that can give you quinoa and make you like it, with the regular menu flan de elote, a perfect creaminess, just firm enough and then the quinoa, black in this case so providing a fine contrast for the best-butter-yellow flan (every plate is an eyeful with Sedlar), and then also providing a bit of crunchy contrast too. Here's to more savory flans like this one.

The only thing missing might be a cart for them to roll you out on when you're done.
Posted by George at 2:00 PM No comments: 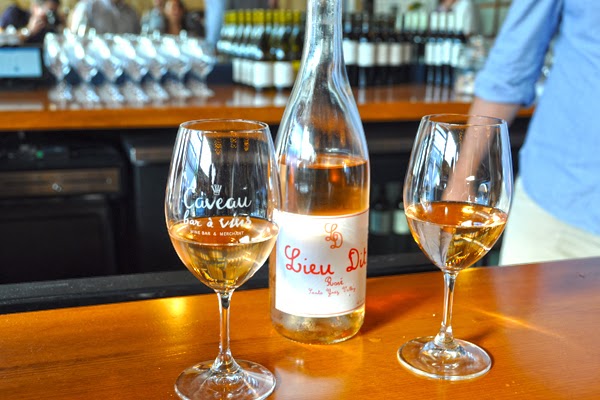 The elements that make a wine shop a good wine shop evolve so fast it would make Charles Darwin's head spin, even before he consumed anything they sold. There's the old-timer shop, a mix of liquor and dusty wine and tequila sold in bottles shaped in everything from skulls to machine guns. There's a more recent iteration, full of inventory and people who can tell you about it, but it's sort of no-frills otherwise, and there's sadly no tasting.

Posted by George at 6:12 PM No comments:

Email ThisBlogThis!Share to TwitterShare to FacebookShare to Pinterest
Labels: a start and a nudge, KCET, Les Marchands, Weston Richards, wine

Want to read the rest then do so at the Indy's site.
Posted by George at 6:09 PM No comments:

Email ThisBlogThis!Share to TwitterShare to FacebookShare to Pinterest
Labels: a start and a nudge, Buddha Bowls, Independent, Isla Vista 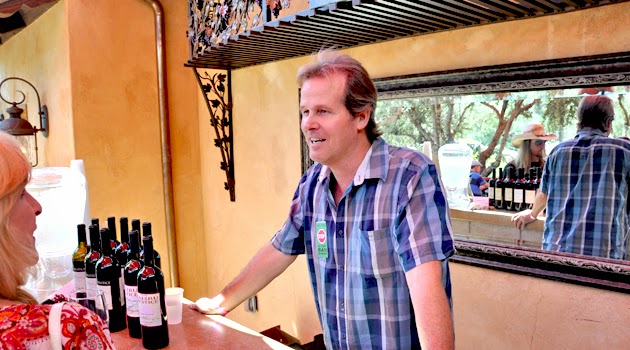 At a recent tasting of a dozen or so Malibu-based wineries in Westlake Village, each producer generally poured no more than two wines and provided no print material. This prime property is a land, however gorgeous, beyond the niceties of modern marketing. Part of that is these wineries -- who are making some lovely syrahs and cabernets -- have so little wine to begin with; for instance Malibu Vineyards, with its 400 case annual production, claims, "We really don't serve to the public," meaning you need to be on the list or no dice. Colcanyon Estate, at a mere two acres of vines and 103 cases a year (probably not even the amount of wine drunk at Oscar after-parties), has even less wine.

Want to read the rest--and it's a long rest--do so at KCET's Food Blog.
Posted by George at 9:41 PM No comments:

After nearly a decade of hosting Maryland-style Crabfests at its Hollywood location, the Hungry Cat is finally bringing the fest to Santa Barbara on August 24. “What David [Lentz, the Maryland-born Hungry Cat chef] wanted to emulate was the Maryland blue crab party,” said general manager Bob van der Veer, “a laid-back vibe with the steamed crabs spread on newspaper on the table.”

Want to read the rest then do so at the Indy's site.
Posted by George at 9:36 PM No comments:

Email ThisBlogThis!Share to TwitterShare to FacebookShare to Pinterest
Labels: a start and a nudge, crab, hungry cat, Independent

When Maggie’s at State and A closed after only 14 months in existence — didn’t it take longer to renovate the place? — the social mediascape was full of good-riddances for both the high-priced food and the restaurant’s out-of-place tapestries. Thankfully, the prime corner location is returning to a more down-home Santa Barbara vibe now that the Bennetts are in charge. The family, which also owns Brophy Bros., On the Alley, Arch Rock, the Cliff Room, and Farmer Boy Restaurant, just reopened the property as Benchmark Eatery, which is already attracting crowds for great people-watching and a wide variety of food and drinks.

Want to read the rest then do so at the Indy's site.
Posted by George at 10:59 PM No comments:

Email ThisBlogThis!Share to TwitterShare to FacebookShare to Pinterest
Labels: a start and a nudge, Benchmark, Bennett Family, Independent 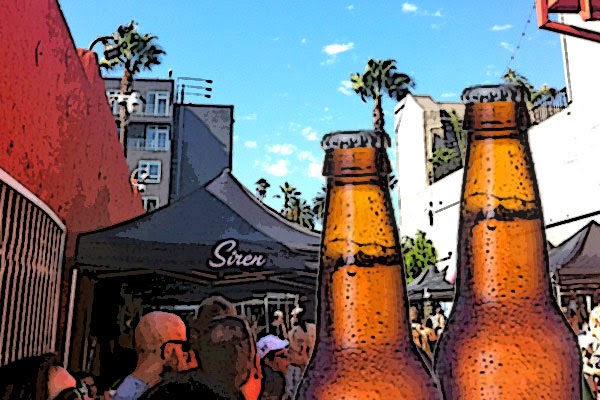 You know you're at an event with weird beers when one of the beers is actually called Weird Beer. That's Smog City's saison, fresh from Torrance, and it wasn't that strange, really, if you are used to tasting a spicy farmhouse saison style beer (based on a style from the French-speaking part of Belgium, and that's sort of a hint as to flavors, too, if you think cuisines).

Email ThisBlogThis!Share to TwitterShare to FacebookShare to Pinterest
Labels: a start and a nudge, beer, blue palms, KCET 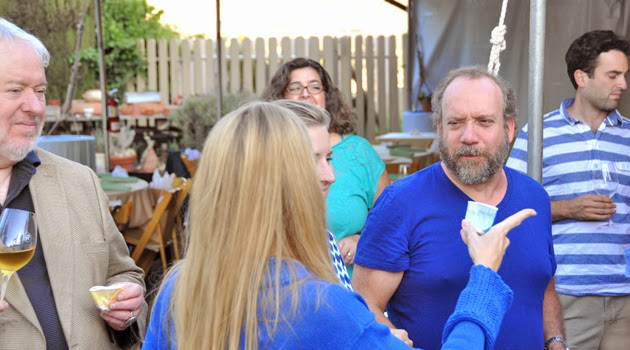 Some movies, at best, get a DVD re-release on their tenth anniversaries. Sideways, 2004's surprise Oscar-lauded tale of a sodden Santa Ynez bachelor party romp focusing on a mismatched pair of friends, sad-sack Miles and fading-actor Jack, well, it recently scored a bunch of fine fêtes instead. For as much as the film starred Paul Giamatti, Virginia Madsen, Thomas Haden Church, and Sandra Oh, it also starred Santa Barbara wine country. And Santa Barbara wine country likes to throw parties.