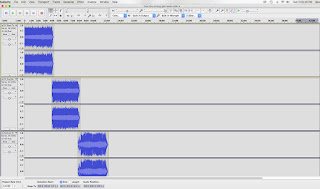 Borges’ Pierre Menard wanted to write—not re-write—Don Quixote. I’m just hoping to digitize a host of my garage’s box of mixtapes. But it feels like a similar project, bringing back to life a person who once was, even if that person was me.

That’s how I’m getting though this time of pandemic. Overthinking it. Wanting to write and instead just reading more, and in this case going back to Borges, who I hadn’t thought of in years. Freaking out that one sentence above should end “even if that person was I” but refusing to write that as it sounds so geekily insistent on good grammar over bad sound.

For mixtapes are all about good sound, at least to start. And that’s what my pandemic obsession was first about. From 1989-2008 I made mixtapes, years between my gigs as a disc jockey (what a quaint term, no?) in community/college radio. Many were for my birthday, but some were just keyed by a gorgeous backup of tunes I couldn’t stop listening to and needed to memorialize. They’re sort of the audio diary to my life, and returning to them brings me back to me. That’s very comforting when what any me can be can disappear with one quick brush of COVID-19.

It’s as easy as this. Grab a bunch of most resonant cassettes; see if you have those tunes as mp3s; hunt for the ones you don’t; build each tape digitally, side A, side B. One of the huge advantages now is the availability of Audacity as a free software to do such a project. After all, when I started doing this in the early ’80s, if I wanted to mix songs I did it on reel-to-reel with a razor blade. (My life has been a technological marvel.)

And so my life—in this world so out of control, from the virus itself to our country, where people protest for the right to ignore science—has this extreme focus in these digital tape re-creation moments. As there’s nothing more comforting than finding the perfect segue. How can you bring two different things together in a way that makes a spectacular same? Somehow I have an ear for this, I think, finding the pairs, or the perfect dissonances, and the original tapes set me up for this project like a grandparent leaving a grandchild a project they might never expect.

But then it means the tiniest of slides on Audacity, slices of seconds, or playing with the fade envelope to bring the tones up or down at the moment I think they should. I get so lost in this focus, the scary outside world fades—I can’t even feel my often over-beating heart. I’m just doing. The most infinitesimal amount of time can matter, and I can make it matter.

Plus the process means all these songs, some I haven’t thought of in decades, come back to me. My early ’90s passion for a band like The Connells. That Pere Ubu show in Chicago when David Thomas broke out the accordion. Weston, a Lehigh Valley, PA band that a former student of mine turned me onto. What else is music but memories, much more memorable Facebook posts in your life before social media existed?

So, while I hunt for each song in my iTunes (which is already a dead technology, I think) of over 40,000 files (which is a sad sad term for music), it’s like one of those movie montages of calendar pages flying off, except aurally.

So that’s my passion to survive a pandemic. My life in a song, and another song, and another. Laid down to make something new, so much so I’m often primed to expect one of these songs following another still, just because of where they lived on a tape of mine. So here’s to “Lies Before Their Time,” “Shoulda Woulda Coulda, “What Next, Big Sky?” I’m going to rebuild my musical past and hope it gives me a place on which to stand to see a future.