Whenever You're on My Mind

You never know what lurks outside the frame. That's what makes life lovely and Halloween. (Long digression that really shouldn't come as the second sentence of a quick essay: John Carpenter figured out in America we read screens left-to-right, just like we read books. So if you shoot a film widescreen, and always have your boogieman pop up from the right of the frame, he's there! already!! before the audience quite gets their eyes over there to see him. Extra scary. Not sure how the film plays in Israel, though.)
So as I wait for my last C-90! Go! radio show to air tonight at 11 pm, and I can't even begin to explain how weird it is to do a radio show while I'm already asleep most weeks (it's pre-recorded, that's not some horribly self-mocking joke), I'm getting pre-nostalgic for my nostalgia. So, so, so many layers of past and memories and longing and singing along when I have hoped no one was listening. I've loved the Marshall Crenshaw album since it debuted in 1982 when I was all of 19 and Crenshaw a wizened 29; it particularly seemed so when I got to interview him  for WJHU, one of my first rock one-on-ones, in the gnarly dressing room at the old 930 Club in DC at one of his shows. I'm sure he thought, "Why am I talking to this child?" He never took off his shades.
But, of course, I figured my heroes shouldn't like me--if they did, how could they be heroic? Especially when his magic all seemed so simple--just perfect little pop tunes that seem a kind of rehash (he had played John Lennon in Beatlemania, he'd play Buddy Holly, his encyclopedic recall was part of his charm and skill). Of course, he flies in and out of verses and choruses in unorthodox ways, he leaves the lyrical cliches pristine so they almost regain their original meanings, and if he wants to, he can drop in a tasty guitar lick, if the few bars he allows himself could ever be considered solos. And on many of the albums, that's his brother on drums, how familial and charming is that (and it helps with the harmonies, too).
Still, here's this video from a concert in 2011, Almost 30 years after "There She Goes Again" was released, and it's already been ten more years since that. And who, of all people, suddenly appears from the left of the frame, and my guess is the person filming on their phone has no idea what they've captured, but it's Ira Kaplan from Yo La Tengo, another of my favorite musical artists for decades. It's easy to want to assume all the people we admire secretly hang out together, and if only we were cool enough for that club. But, hey, there they are!
And poor Ira, always appearing so mild-mannered, but as anyone who has seen YLT live knows, is just a feedback burst away from going gonzo, flinging his guitar about or jamming an elbow on an organ that needs some squelching. Here he is trying to fit notes into this tight little construction, and at best he flints off a spooky spark or two, just so you know he's there, so there's a reason he's on stage.
What a lovely discovery, this video. So much I appreciate and have appreciated in 2:51. It's almost enough to make you ignore the lie that's the title of Crenshaw's greatest hits CD--This Is Easy.
Posted by George at 9:08 PM No comments:

So it's almost time for me to cash in on an old half-joke of mine: for my 60th birthday I want a horn section, for my 70th a string section. (Never got further in the time line than that, but perhaps for my 80th, a single bugler playing "Taps"?) That's not to say even young me didn't get suckered in by the strength of strings, for there's this, ABC's debut album Lexicon of Love, which, in 1982, when I was all of 19, delineated how perfectly ridiculous and profound coexist. At that point I'd teen love-and-lost a couple of times, but those heartbreaks are the most stinging because you can't imagine anyone has ever felt as raw as you have, as even you haven't yet. And strings, dammit, they make that hurt so gorgeous.

How lovely is it, then, for much much older me to find this 2017 live version of the band, with a Martin Fry five years older than me (that's all?), still tuxedo-clad and immeasurably sad, leading the band in front of a whole orchestra. As the swell builds, there are so many versions of me to cry for. I'm sort of pleased this particular video never zooms in for a close up--it might be too much. Or even more, the too much is the wide shot, the panorama, the whole world winging its strings for you. (And who wouldn't want that?)

Speaking of want, I never got to see ABC live myself. Despite having not only tickets, but the opportunity to interview Fry himself as a novice radio DJ before a show in DC in 1982, it didn't happen. Fry was sick, it was the last gig of the US tour, the show was cancelled. And my love was unrequited. How perfect is that? If that's the trash aesthetic I suggest that we forget it....

Which, of course, gets me to the fourth to last C-90! Go! radio show on KCSB in March of 2021. I'm an old fuck now. I'm more deeply in love than I ever could have imagined at 19 (well, let's sure as hell hope so, no?). But I feel all the ages of my aches when the simple, stupid, lovely, so much of everything songs on a mixtape like 1990s' "Only the Lorn-ly" play. And especially when the strings come in.

You can listen to the show on Spinitron for two weeks from the post.

Posted by George at 8:33 PM No comments:

Well, I'm a Just a Pretty Thing that You Wanted for a Day*

OK, not food, at least the down the gullet kind. But perhaps food that hits the gut, if you're as old as Pops Yatch. That's been my alter-ego on KCSB for the latest round of radio for me, doing a show called "C-90! Go!" on which I dig out old mixtapes--there's a hefty box of them in the garage--and re-create them each week.
The ditty above, studio version, is part of this week's tape, "Only the Lorn-ly," for who doesn't love a good wallow, especially if that who lived through all the synthesizers the 80s threw at him. The tape is from 1990, and at the time I wasn't probably particularly lorn-ly even, but why should that stop me?
But enough about me...how about Eurythmics? To be honest, while I like them I've never like liked them, no doubt partially because they were actually kind of popular, and especially in the 1980s I would have none of that. Never wanted to be part of any fandom that had more than me as its member. (And if you think that's a dick joke, well, it sort of is.) But I did get to see Eurythmics live once, and while that was even longer ago than this tape, than the recording of this video, it's still one of the best shows I've ever seen. Because it was a show. I mean, before they even appeared at Merriweather Post Pavilion, the stage had a curtain that looked like it was zippered together at the front. Much edgier than opener Howard Jones and his mime. (He really did his show with a mime! I guess the roadies liked having to schlep his gear.) And then the zipper unzipped and Annie Lennox came out full butch laced into leather dominatrix, and we were all just putty in her hands.
You can catch a lot of that aiming to please in this clip for "The Last Time:" the clearly choreographed bits (I'm a sucker for a band when the musicians move like they are in the same group--another favorite '80s memory is Peter Gabriel doing pretty close to aerobics with his band on "I Go Swimming"), Dave Stewart, cool in his shades, slashing his guitar (more on him in a bit), a background singer that can belt with Annie, so much leather there are probably cows outside the venue in protest. Energy, everywhere.
You know, I miss live shows.
You know, I never forget live shows.
For that July in Columbia, MD in 1984 when I got to see the band, two wondrous things happened. One was Lennox pulled some folks up from the front row, and lo and behold one was a long-haired friend of mine who danced so madly I thought his flopping lengthy locks might hurt somebody. He was the happiest grinning fool, and in normal life his radio show back in the day played what that station called NAR--Not Available Radio. (Indeed, a Residents reference.) Ken worried not a whit that he shimmied next to a pop star. I wish I could say such a revelation changed me.
And then there was the bit where I could just close my eyes, which often seems counterintuitive at a live show--"dummy, you can do that when the record is playing"--(note, this was 1984, so even pre-CD), but just as often is necessary for a moment, when it can get to be too much. As it was as Stewart didn't just go through the rockstar catalog moves but unleashed a wholly unholy solo at the tremulous end of the brilliant "Jennifer" that built past the place where building seems possible, something nearing noise and heaven in the same arcing sustain.
I'm going to go close my eyes now, as I need to be at a live show right now.
*Yes, that does mean 2 out of my last 3 posts have titles nicked from the same band.
Posted by George at 8:29 PM No comments: 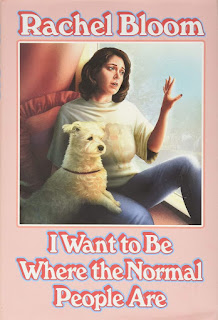 Think of Rachel Bloom’s memoir I Want to Be Where the Normal People Are as a bathroom book. It’s written in zippy chapters—some lists, some mini-screenplays, some poems from her childhood (they are often illustrated, as it seems she’s kept all her life’s journals, and yes, she is OCD)—so makes for quick, diverting reading when you might be busy otherwise. But it’s also a book about the bathroom: turns out it’s one of Bloom’s favorite locations, and you will get details. If you’re a squeamish reader, you have been warned.

Want to read the rest then do so at the California Review of Books.