This is already a memory piece, of a meal in late July, but all food writings are memory pieces, aren't they. We either recall, relish, hope to relive or search for relief by ranting and venting. This, happily, is the former, as perhaps just this photo might make clear 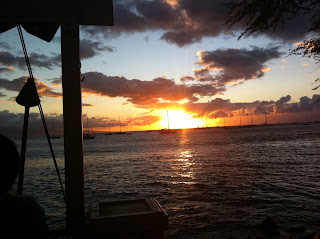 as we're discussing a spot Pacific-side in Maui, so much so the turtles bob surfside like something Disney might have dreamed up, but these are real. It's in Lahaina, too, a town the tourists have taken over too much since its early whaling days when Herman Melville and Richard Henry Dana sailed through on their eventual writing ways. It's now dominated by t-shirt shacks and food filling stations (you can hardly call them restaurants) with maitre d's with headsets for traffic control, that will help you, definitely, get to the Cheeseburger in Paradise emblazoned t-shirt shack attached. Yes, that spot, but a bit to the north on the way out of town, close to another fine place I should blog about, Aloha Mixed Plate, sits Mala Ocean Tavern, and when in Maui you must go.

You must eat too much, too, as so much is good and the flavors run in so many directions--as if the tradewinds kindly dropped all the Pacific's cuisines into Mala's kitchen, along with enough cooks to pull it all off, too. Our fine dinner, on a deck at ocean's edge, as the sun set...well, why even finish that sentence? Oh, yeah, because the food and service (much more on that in a coming entry, promise) were so stellar we could have had the meal in a viewless cellar and been perfectly pleased. We shared a starter and salad, as that sort of seemed healthy and not-too-gluttonous, a plate of alii mushrooms in garlic and parsley (and they don't mention the probably butter/olive oil combo) and a Gado Gado salad, sneakily vegan with its tofu, brown rice, sugar snaps, tomato, chickpea, and a richly delicious coconut peanut sauce. This was a first course feast of food, and if you've never had alii mushrooms and are a funghi fan try them--they're marvelously meaty and called the "king oyster," so think that flavor, yet more room in the mushroom for it. A simple saute like the one Mala does sets them off excellently.

For a main we went for the the whole fish of the day for 1, as it feeds 2 amply. This day it was kampachi, a Hawaiian yellowtail rich and wok fried fantastic, fleshy and flavorful, the star of a dish full of other goodness, too, from a ginger garlic black bean sauce that makes clear what lame imposters most Chinese restaurants are to Molokai purple potatoes, a tuber that makes you wonder if potatoes need to go through the whole heirloom craze that's made tomatoes so exciting the past few years. If you wash that down with a 2009 Selbach-Oster Riesling Kabinett the spice will go nice and the bit of sweet will treat, and you won't get schnockered as it's low in alcohol, too. Oh, and the fish looked like this 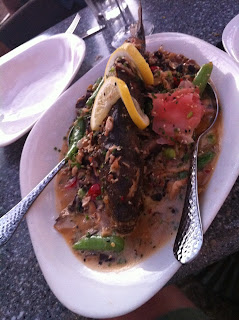 and the photo doesn't do it justice, not till the iPhone camera comes with smell- and taste-o-vision.

There was dessert, too, at their peak fresh fruits, a slew of them, in something cheekily called a Caramel Miranda, so indeed, everything was a bit broiled to get the sugar up, and then there's just enough caramel and chocolate (the slightest hint) to send it all off into the stratosphere. It was a meal of ever increasing care and detail.
Posted by George at 10:30 PM 2 comments:

The Apple of My Eye 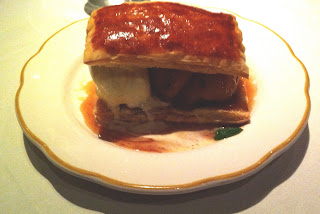 Downey's always leaves me thinking the old adage: Simple is not always best but the best is always simple.* And so, somehow after their Autumn Chef's Dinner earlier this month, and after all the other fine courses (including a homemade pasta with a light--yes, really--cream sauce and chanterelles, the pasta rung by kale, well, I could have had plates of that), I keep thinking of the dessert above, for which my iPhone photo does little justice.

Basically it's apple pie a la mode, isn't it? Well, I love my mom, but she sure didn't do this. For every element seems to have been labored over as if it were the only element, and you add all that care up and you get an apple dessert that will ruin you for any other. That crust, flaky and crisp, buttery but not so much it seems to ooze from your pores afterwards. Balance. Same with the apples, halved, perhaps, and then baked to the point you chew through without problem, but they still hold together--it's fruit, not sauce you're enjoying. That ice cream, vanilla and cream and enough (nothing worse than a la mode that a-la's away too soon). And then the caramel sauce, here importantly not too much--it's like a spice for the other elements that shine enough they only need a wisp of burnt sugar.

There is a reason we gave John Downey the 2011 Independent "Izzy" Award for Lifetime Achievement. The man can cook.

*Note: I do not always believe this, no way, nohow, as a lover of the Bradbury Building, Ulysses, and Phil Spector (producer, not murderer).
Posted by George at 8:01 AM No comments:

As a co-owner of Casa Blanca Restaurant & Cantina, Adam White can be honest to a fault. “We started with a fairly pedestrian menu that didn’t match the facility in some ways, so we had to get a more high-octane chef,” he admitted recently. “Onofre Zuniga had been let go by Cava after 15 years and was recommended by one of our vendors. He started last Wednesday [November 2], and the damn food is night-and-day better already.”

Want to read the rest then do so on the Indy's site.
Posted by George at 8:01 AM No comments:

Email ThisBlogThis!Share to TwitterShare to FacebookShare to Pinterest
Labels: a start and a nudge, Casa Blanca, Independent

Bottom of the Fifth and the Bags Are Loaded*

The Hot Stove League ain't methadone enough to soothe my baseball jones, so this time of year is always hard, when baseball's season ends and I have to go cold turkey. For months. (At least there's labor peace in MLB and I don't have to play the "do I root for the millionaires or the billionaires" game basketball fans get to enjoy right now).

You might be wondering why this confession of mine is here at Georgeeats, not Georgefans (which not only suggests my liking of the game, but also aptly would sum up my time in the batter's box). It's because one of my favorite internety spots, Baseball Prospectus, kindly has posted this today: "Buy Me Some Wontons and Crackerjack: 11 Foods That Should Be Available as Ballpark Concessions but Aren't."(I think the article isn't behind the paywall, so let me know.)  It's good to see them having some fun with it--no one could argue with the idea of the $2 veggie taco and the $3.50 microbrew, but then people also suggest poutine, and even better, communal fondue stations.

What I'd like to see is more places feature knock-offs of famous restaurants from the town the ballpark is in--screw Dodger Dogs, which have become pretty execrable (sorry Farmer John's!), and let's have a Pinks. And for burgers, I want a MoFo (that's a Mobile Father's Office) on at least every level. San Diego needs its Stone World Baseball-istro. Yes, I know, you can get Stone in Petco already, but why not the food too? It's already priced like at stadium-prices. Speaking of that, why not some high-end versions of classic ballpark food? This treat could be a true seventh or any inning stretch, no?

Plus, beyond food, there needs to be mobile bartenders with little carts working the aisles. How much more civilized a game might be at Yankee Stadium if a section were sipping on Bronx Cocktails. The vendor-bartender just better to be sure not to use a Boston shaker.

"The Kitchen" Heats Up the Screen

It’s not every day an actor’s audition hinges more on his ability to whip up an omelet than memorize a monologue, but that was somewhat the case for Samuel Roukin, one of the stars of the National Theatre’s production of The Kitchen, coming to a Campbell Hall HD screen near you. While Roukin has worked as a waiter, kitchen porter, barman, and restaurant manager, what he says most helped him to prepare for the play were rehearsals with consultant Jeremy Lee, an esteemed London chef at Blueprint Café. “He put us through our paces, taught us knife skills, basically turned us from actors into kitchen help,” Roukin explained. “He got us louder and quicker.”

Want to read the rest then go to the Indy's site.
Posted by George at 8:01 AM No comments:

Email ThisBlogThis!Share to TwitterShare to FacebookShare to Pinterest
Labels: a start and a nudge, Independent, National Theatre, Samuel Roukin, The Kitchen

Over the past 18 years, SOhO Restaurant & Music Club (1221 State Street, [805] 962-7776, sohosb.com) has probably been better known for the latter part of its name. That’s going to change, as SOhO’s menu certainly has — 75 percent of the food is now sourced locally and sustainably.

Want to read the rest, then go to the Indy's site.
Posted by George at 8:01 AM No comments:

Email ThisBlogThis!Share to TwitterShare to FacebookShare to Pinterest
Labels: a start and a nudge, Independent, SOhO

Is there anything more common yet weird to eat* than toasted pumpkin seeds? I mean the ones you yourself have scooped out from a pumpkin...that you then go and carve, preferably with a knife Michael Myers might wield, into something resembling a face. So there's that, the whole borderline brain issue, but I'm more concerned with the anticipation/result portion of the pumpkin seed snack. For they certainly smell lovely when roasting, either in the pan or in the stove, a scent distinctly fall, and no doubt that's associational, but it's a sweet spot between firewood and root vegetable. Of course you can then spice them in so many directions, from simple salt (and who just has simple salt anymore--I think we've got at least 6 salts in our house right now) to a curried extravaganza (either cheat with powder, this is just a snack, after all, or start with turmeric and keep adding). They can become a vehicle for a flavor, this way, no different than a potato chip dressed up for a foodie ball in its buffalo bleu gown, say.

But it's not even the taste I want to address. It's what happens when a handful of seeds slowly get crunched to pulp in your mouth. Is it just me, or is there at least a scintilla of the sense you're eating wood? It passes, and you'll grab another handful cause you're not sure. Or is it you refuse to believe. No doubt your mom first made this for you, and if you're of a certain age (say, oh, mine), it might be one of the first times the kitchen seemed interested in re-use/re-cycle. And, perhaps, suggesting you shouldn't care about such things. Or, suggesting we're oak-nivorous at heart.

There's no way that it's a trick moms play, for they deserve their spook-inducing treats too, you know.

*Hope that keeps any of you from suggesting, "Why, George, Seasonal Yak Testicle Jerky from Tavan Bogd is pretty weird, isn't it?"
Posted by George at 8:01 AM No comments: