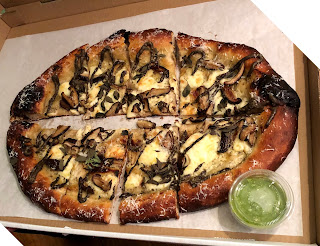 It’s easy to forget the delight, amid the rest of the memorable meal, of bread service at Barbareño. But when that sourdough and fresh butter arrive, it’s a transformative moment, the simplest of food made transcendent. (And that’s part, I’d say, of a strong Santa Barbara tradition: think back to Downey’s Irish soda bread and Sly’s rye raisin rolls.)

So it’s no surprise that the pizza dough from the same punchy starter kicks off the crust to-die-for at Barb’s Pies, which is Barbareño’s sister restaurant “hiding” in the kitchen at the recently opened bar/restaurant Venus in Furs on East Cota Street. What a crust it is, formed into leftover-providing 18-inch ovals, thin in the center but puffed and charred on the edges.

Email ThisBlogThis!Share to TwitterShare to FacebookShare to Pinterest
Labels: a start and a nudge, Barb's Pies, Barbareno, Independent, mushrooms, pizza, Venus in Furs

Hotel Californian’s Blackbird Is Ready to Fly (well, except for COVID and all...) 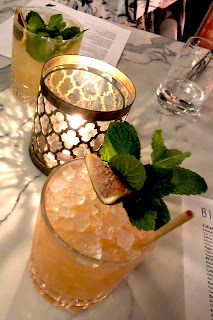 Somehow I never posted this item I wrote for the Indy that ran back in December. Have been doing so little freelance work that I don't remember how to follow up properly!

But here's the first graph:

Posted by George at 6:08 PM No comments: