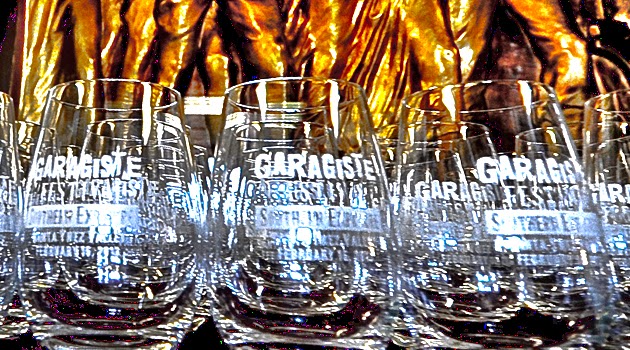 A bunch of musicians get together in the part of the house where they usually park the car, and they're just a garage band. Some folks opt to make wine in the same spot and they're garagistes, since it's wine, and the French make wine fabulous. Garagistes make fabulous wine right here in California, too, and if you want to learn more about these micro-producers, you should check out The Garagiste Festival: Southern Exposure, March 28-30 at the Solvang Veterans Memorial Hall. 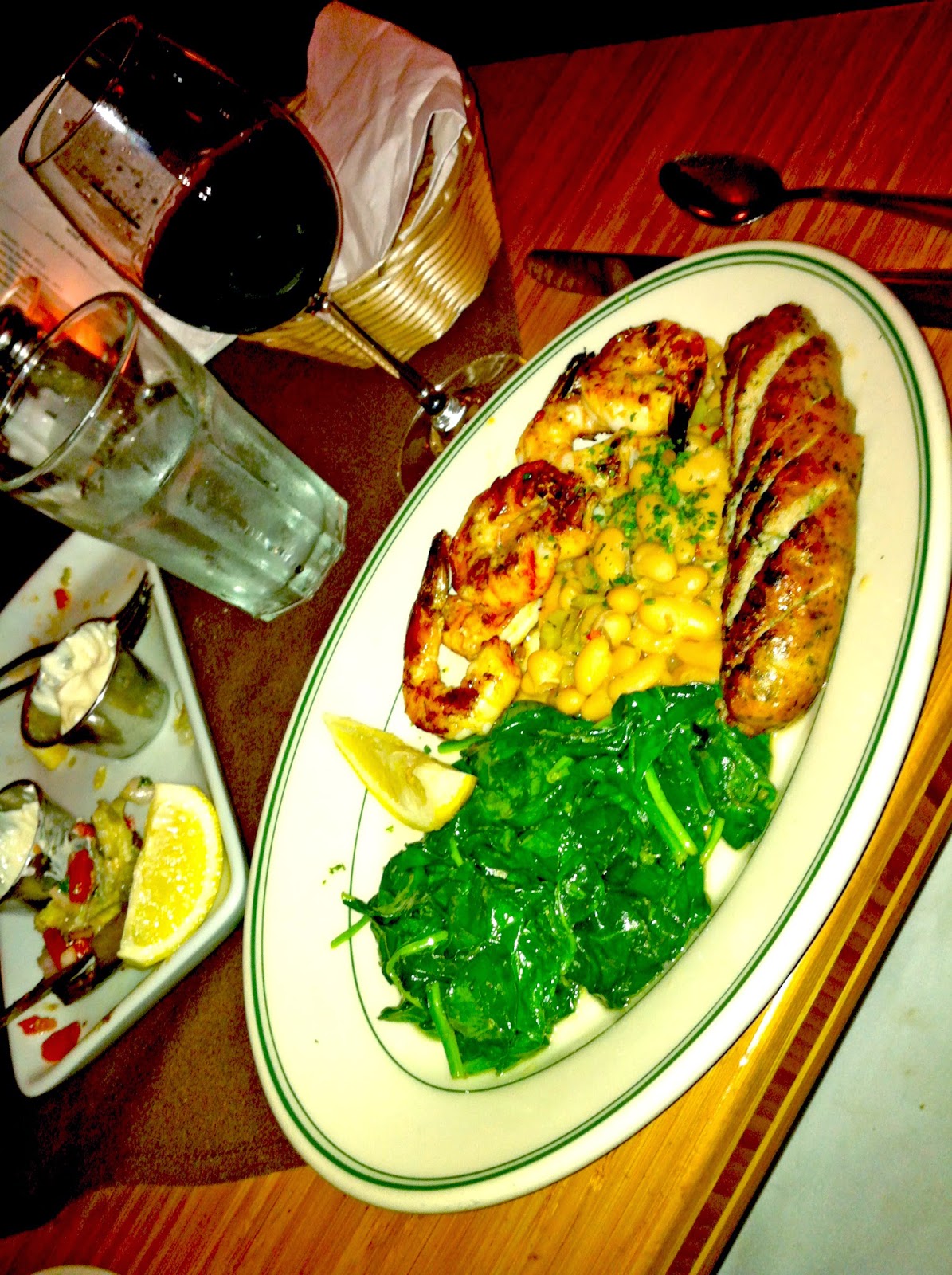 Would a cassoulet by any other recipe taste as sweet?

It might if you’re used to being enticed by the oak grill smells that waft about the intersection of Anacapa and Ortega. Paradise Café offers something simply called Grilled Shrimp and Sausage ($15.95), but simple it isn’t. Not that it’s complex. But it surprises.

Want to read the rest then do at the Indy's site.
Posted by George at 5:30 PM No comments:

Email ThisBlogThis!Share to TwitterShare to FacebookShare to Pinterest
Labels: a start and a nudge, cassoulet, Independent, Paradise Cafe, sausage, shrimp

5 White Wines to Pair (or Not) With Fish Tacos 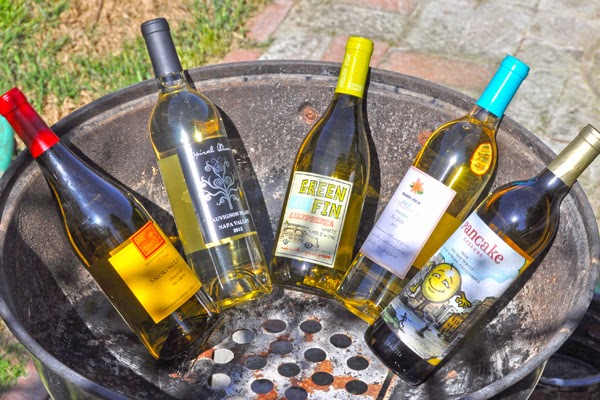 Given the unseasonably warm weather of late (and do we need to start a pool about when the term unseasonable has to be struck from the dictionary as meaningless?), it seemed time to wash the spiders out of the trusty, not-too-rusty Weber and grill up some veggies and fish for a heaping helping of tacos. While perhaps nothing beats a good homemade margarita to accompany such a feast with friends, it's a bit too easy to have a second and maybe more margaritas, and then the night just becomes a tempestuous tequila haze. If the weather wants to stay warm into the evening, it might be better to find a wine to quaff, especially if that wine can pour inexpensively. I mean, we all love our friends, but we can't share the top shelf every time they come over (or they will never stop coming over). 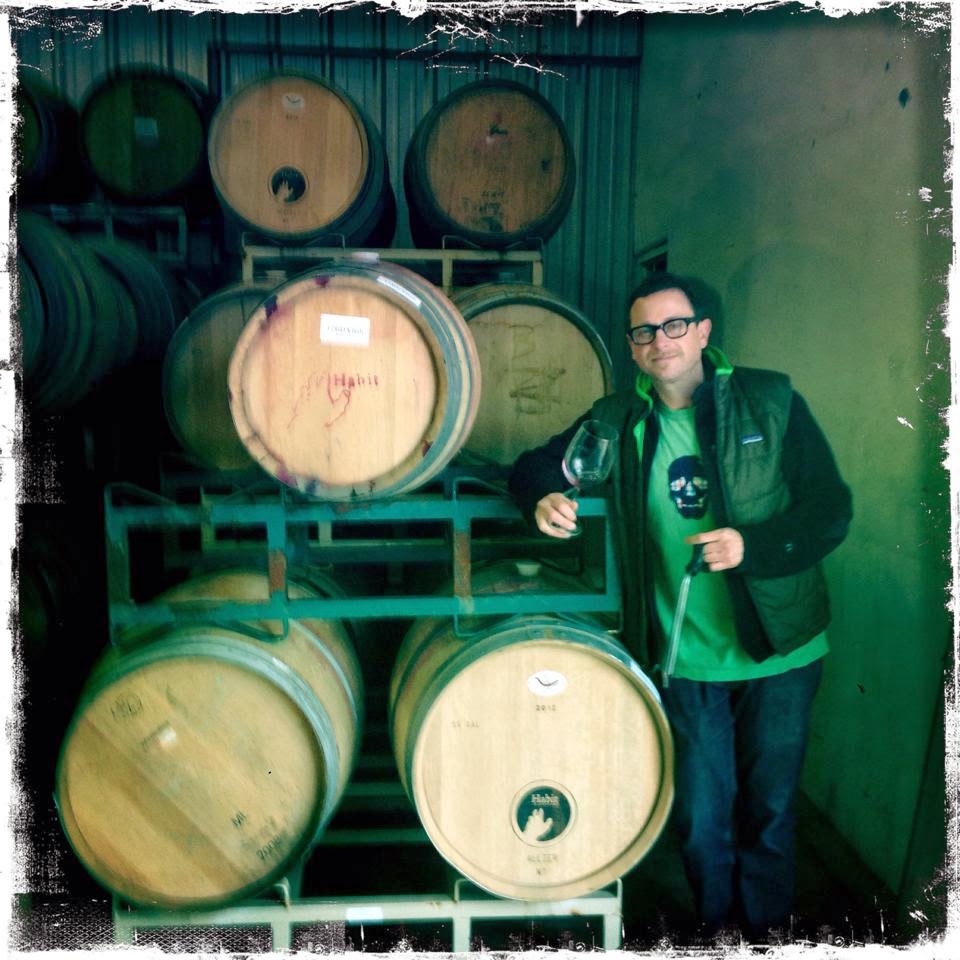 Jeff Fischer is a winemaker. Jeff Fischer is an actor. Jeff Fischer is a character on American Dad! All three of these Fischers are the same man. Fischer, pretty much all the manpower of Habit Wines, recently agreed to an email interview--as he could work that in while he was on set. About his two day jobs he admitted, "It's pretty insane. I honestly don't sleep much, my brain is either thinking about auditions, worried about getting a job, or the winery, grapes, bottling etc. all the time. I try to never miss an acting job due to wine as that pays the bills and allows me to continue to make wine, but as I've grown in size from 50 cases in 2008 making just two wines, to over 2000 cases in 2013 making seven different wines, the wine business has gotten pretty serious. So basically my day is divided between the two. Luckily with technology, I can be on the road and audition, as well as ship wine and keep up with the business from L.A. or the winery."

Want ot read the rest then do so at the KCET Food Blog.
Posted by George at 8:00 AM No comments:

Email ThisBlogThis!Share to TwitterShare to FacebookShare to Pinterest
Labels: a start and a nudge, Habit Wines, Jeff Fischer, KCET, wine 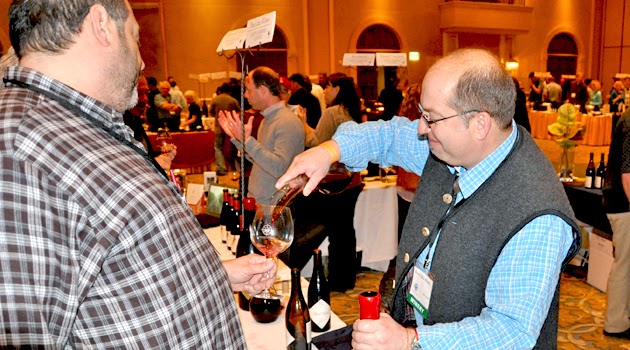 It was pouring in Santa Barbara, and I don't just mean the welcome rain: on February 28 and March 1 over 200 pinot noir producers took part in grand tastings at the World of Pinot Noir held at the Bacara Resort & Spa. You know it's going to be a monumental event when you descend the stairs to the tasting area only to see Richard Sanford first, currently the man behind Alma Rosa wines, but also the one who first thought pinot, that tricky grape to grow, would find a fine home in Santa Barbara back in 1970. 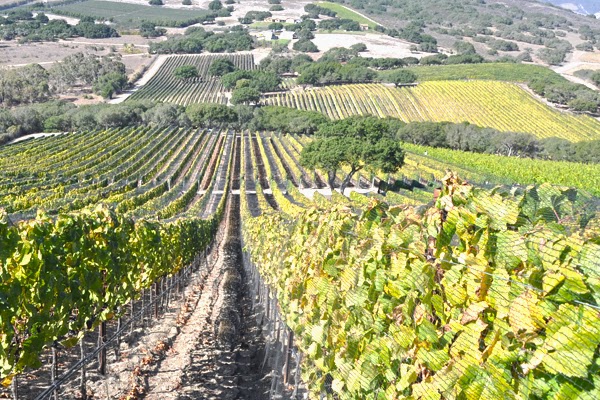 From Aberrant in Oregon to Wren Hop in California, hundreds of pinot noir producers have descended on the Bacara Resort & Spa in Santa Barbara for the World of Pinot Noir. It's the kind of event that makes it clear the world of pinot noir is really more of a galaxy; just as somehow the simple word "dog" encompasses everything from bulky bulldogs to beauteous borzois, pinot noir seems to be having (or perhaps always is having?) its defining moment. What is exactly too big, too small, or just right as the expression of this most finicky, fabulous, and fine of wines?

Want to read the rest then do so at the KCET Food Blog.
Posted by George at 8:00 AM No comments:

Movies and Wine at the Hollywood & the Vine Event 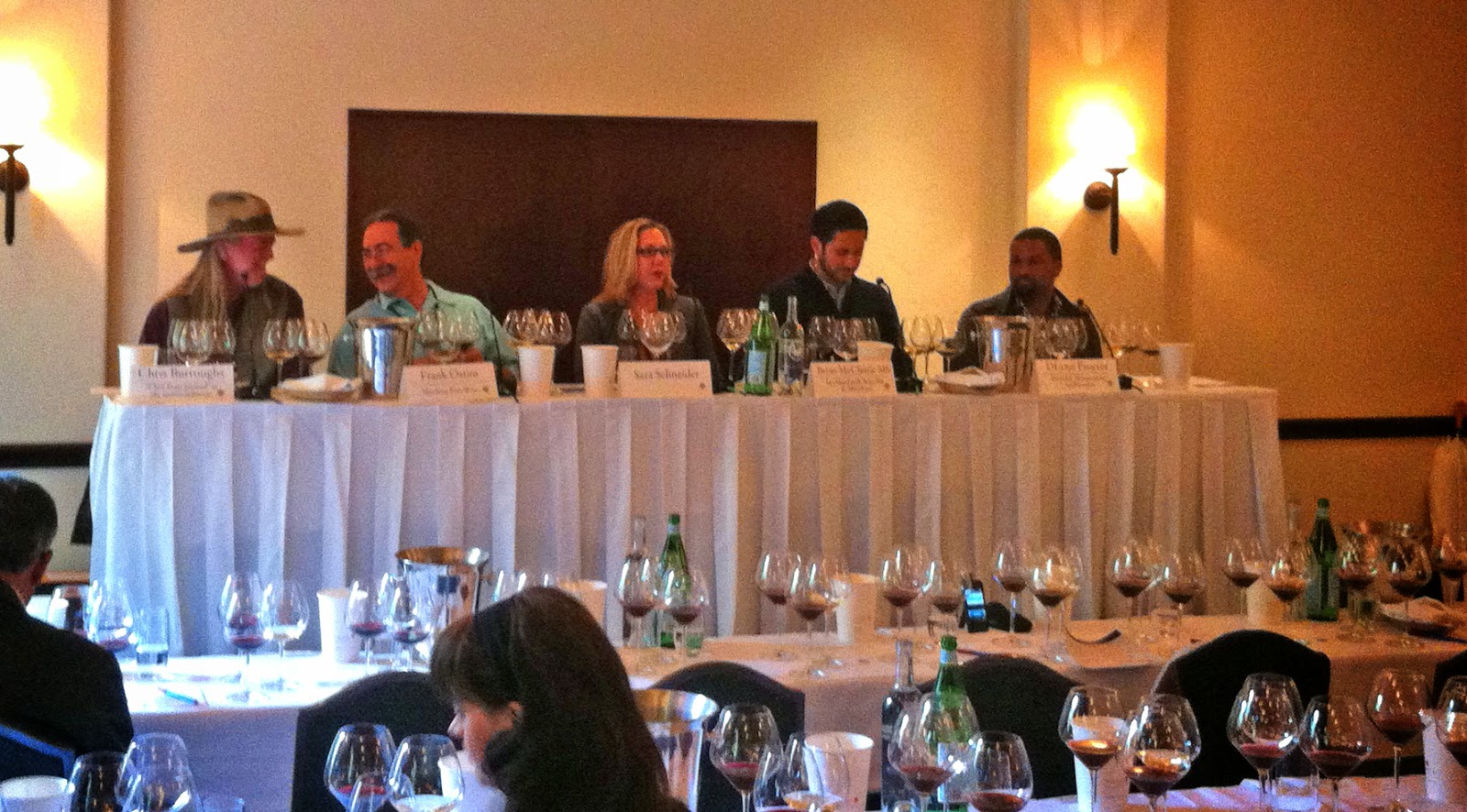 While pinot noir and film noir rarely meet -- the later is all about whiskey, neat, of course -- pinot and film certainly do. They definitely will at the Hollywood & the Vine Seminar on Saturday, March 1, that's part of the World of Pinot Noir, held at the Bacara Resort & Spa in Santa Barbara. And yes, there is a World of Pinot Noir -- not just in your dreams, but an annual conference-tasting-celebration of the beautiful Burgundian varietal. 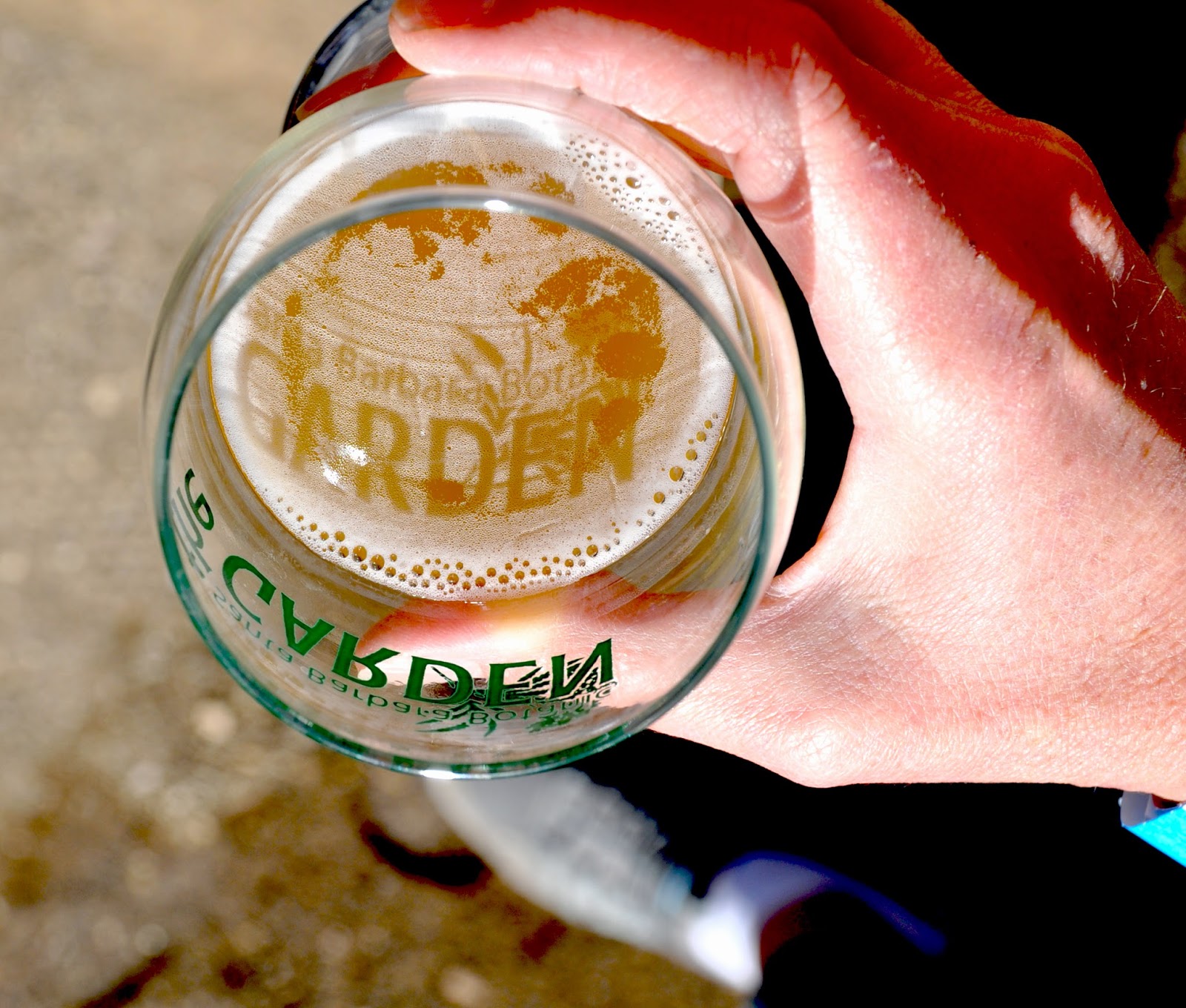 Sorry, this was supposed to be posted elsewhere a few weeks ago, but I wanted it somewhere for posterity.

It’s hard to beat a chilled beer on a warm outdoor afternoon, but the surely did on February 22 when it became the Santa Barbara Beer Garden. After all, it offered craft beer amidst a local horticultural treasure on a halcyon pre-spring Saturday. If this becomes an annual event, the Natural History Museum’s Santa Barbara Wine festival has an ale-oriented counterpart.

Cicerone Zach Rosen did a fine job matching beers with locations, orchestrating the eight stops for eight beers like a DJ putting together a perfectly segued and tempo-varying playlist. Kicking off with Pure Order Brewing Company’s Crooked Neck Hefeweizen, a refreshing, bright wheat beer as a sort of overture, made by a just-about-to-open brewery alongside the just-getting-renovated meadow section – well, what could be a better themed opener than that?

While all the pours shone in their fine settings, a couple truly stood out this day. For instance, Santa Barbara Brewing Company’s King Saaz (so called because of its featured hops, called a noble or wild hops, from Bohemia)(the place in eastern Europe, not the Mexican beer) seemed to take bold inspiration from the redwoods where guest got to taste it. Surprisingly full of flavor – it is an imperial pilsner, after all, its dry-hopping really hit home, especially on the nose. The people pouring it insisted it was a beer, “just about skill and technique,” but it was far from a technical exercise, pungent, pleasing, palate-refreshing.

In a completely different direction, and therefore attesting to the wonderful range beers can encompass, was the Dudes’ Grinning Face Porter. Darker and seemingly heavier (thanks to its toasted malts) than the Saaz, it actually was lower in alcohol (don’t fall for that “if it’s dark it’s strong” trick). While you couldn’t miss the coconut flakes and vanilla added to the mix, it remained in perfect balance – far from sweet thanks to its good hoppiness, but far from an IPA pucker-bomb, thanks to its rich, roasted grain. And it made for some crazy good ice cream floats, too.

Meanwhile, there was still Surf Brewery’s Imperial Red Ale and The Brewhouse’s Abbey Ale and Island Brewing’s Avocado Honey Ale and Telegraph Brewing’s Handlebar Abbey on Oak and Figueroa Mountain’s Davy Brown Ale to enjoy, too, which is a lot of enjoyment.
Posted by George at 8:00 AM No comments: