The Chef, My Friends, Is Blowing to Los Alamos

It's called George Eats, not George Writes, but you know that, of late. After all, it's not George Monetizes (and has there ever been an uglier word for an uglier thing? it's practically onomatopoetic), so all the stuff I need to do to make some money has sort of taken up the time that I'd love to use instead to be doing this. But there is a lot of news, isn't there....

Starting with the big changes at two of my favorite places (just ask Visa) to eat in the county--Hollister Brewing Company and Full of Life Flatbreads. As you might have read elsewhere, after a couple of years making HBC not just a beer mecca both a food one, too, Dylan Fultineer has moved on to Full of Life Flatbreads, and the weekend meals there are as luscious as ever, with flatbreads combining the best of the market (a recent one with grilled to perfection peaches, grilled chicken, and arugula knocked me out) and special apps and a main course the table next to us gushed about. So, the rich just get richer. There's just two too bads: 1) Los Alamos can seem far away, especially given the wine list is so fine, and 2) it's only a restaurant on weekends. But here's to all the best success for Dylan up in Wine Country, especially as he and his wife start a family. 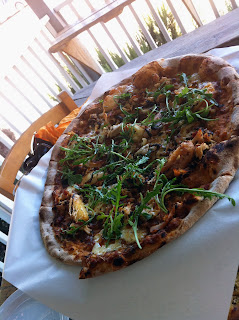 We don't need to be too sad here at Hollister, though, for Dylan's trusty aide-de-camp Mike Coan is now executive chef. Coan moved west with Fultineer from Blackbird in Chicago to open the SB Hungry Cat, went up to San Francisco for seasoning at ace places like A16 and Delfina, but he's been back at HBC for awhile and ready to step into the lead position. Based on some recent HBC visits, we've all got nothing to worry about, and not just because the glories of the latest delicious batch of Eric's Hippie Kicker IPA smooth out the edges of anything wrong in one's day.
Posted by George at 8:01 AM 1 comment:

Although Casa Grande, the main building of San Simeon’s sprawling Hearst Castle, boasts 38 bedrooms, 41 bathrooms, and countless pieces of valuable art and antiquities, William Randolph Hearst never stopped calling his extravagant spot “The Ranch.” Since 1865 when his father, George Hearst, bought the property, the rolling hills above the Pacific Ocean have been prime cattle country. That tradition continues today, as Hearst Ranch Beef (HRB) is one of the country’s premier meat producers, offering sustainable, grass-fed beef grown on the property’s 82,000 acres and at the 73,000-acre Jack Ranch inland.

Want to read the rest then go do so at the Indy site.
Posted by George at 8:01 AM No comments:

Email ThisBlogThis!Share to TwitterShare to FacebookShare to Pinterest
Labels: a start and a nudge, Hearst Ranch Beef, Independent, Whole Foods

Westside Is the Best Side...for Food Trucks and Markets and E-Waste

It's pretty simple--the Westside Farmers' Market needs you. The market is sort of caught, if you've never been, in all sorts of ways. The only one in an actual neighborhood--it's held on the grounds of the Harding University Partnership School at the corner of Valerio and Mountain--, it's attempting to attract customers from a very diverse neighborhood, and perhaps underlines the issues not talked about enough, namely that the current food revolution is a bit bourgeois. Still, everyone needs to get the message that organic local food from small suppliers is best for a whole host of reasons, from personal health to the planet's well-being. And keeping a market like the Westside one going is key to helping make that point. The past few weeks the market has had an added attraction no other market does--the school district's Mobile Cafe has been serving up meals on the cheap. You really need to come on down, enjoy a great grilled veggie salad (for $5) or a double burger (for $6) or some Mexican food specialty (those have varied from week to week). It makes the market a much livelier, friendlier place. Then go support the farmers, so they can tell other farmers the Harding Market is in its way back, and they need to start selling again (it was in one of those bad spirals, where fewer people shop, so fewer come to sell, so fewer come to shop, so...yikes). Be there from 4 - 7 pm (yep, the hours are longer now to accommodate people who just get back from the work day). There's a bonus, too, just today--free E-waste recycling! So bring some broke down electronics, and leave with a full stomach and grocery basket.
Posted by George at 8:01 AM 1 comment: 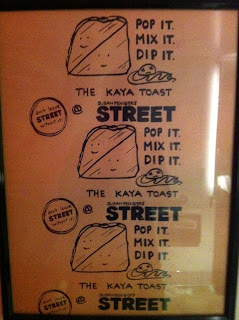 First, I have to apologize, for I've now posted a photo taken inside a men's room, and it's not even of an infamous raging urinal up the coast. (Second, you have no idea how weird it is to be in a men's room and see an entire tour of Japanese come in--luckily I was at the hand-washing stages, but those are the joys of the Madonna Inn.) Third, one feels odd taking photos in a public restroom, at least I do. Fourth, we're a long way from my intended topic, which is the fabulous Kaya Toast at Susan Feninger's Street (they might want it typed all caps, and Feninger is sort of an all caps persona, but I refuse to shout, despite my enthusiasm for the place).

Feninger, originally famous as one of the Two Hot Tamales with co-Border Grill and Ciudad owner Mary Sue Milliken, struck out on her own with this spot that ranges round the globe doing variations of street food gussied up a bit (it's not street food prices, but the odds are way better than the 50/50 crap shoot that you might not be uh, shooting crap from food poisoning afterward, so if you saves your money you takes your chances).

One of the signature dishes there is Kaya Toast, noted as a hangover cure in Singapore (heck, read Feninger's own history of it, and gaze at the recipe). It's not something you'd dream up on your own, but the combo of toastiness, coconut jam sweetness, yolky gooeyness, and soy sauce saltiness (with a bit of bonus arugula pepper) is totally addictive, if nothing else.

The funniest thing, of course, is Fenninger got booted from Top Chef Masters last season (#2) for this dish, her restaurant's most popular. The judges weren't happy as it was too simple for a master to cook up. As if masterful cooking isn't often simplest--there's nowhere to hide that way.

Alas, she wasn't the only chef to get the boot for a signature dish. Jonathan Waxman, who has arguably made the most talked about chicken of the past 30 years, got kicked off the show for serving....Waxman's roast chicken. These judges, they've got no respect for the classics.
Posted by George at 8:01 AM No comments:

Rattled by the Roussanne 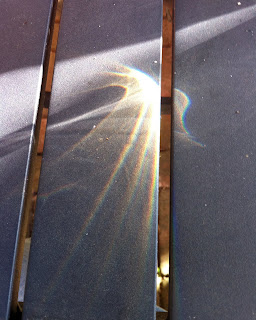 Posted by George at 8:01 AM No comments:

When Taste Is Out of Sight 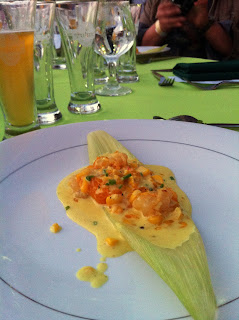 Here's a lesson in what doesn't necessarily look good (or photograph well) might actually be quite tasty. And that's not just because this was dish #2 at a beer dinner recently on June 17 as the opening salvo of Salute! in Ojai. But what you see here is sort of an exploded tamale (torpedoed tamale?), or, as it was billed, "sauteed lobster and sweet corn, with truffle oil, mandarin oranges, chive butter, and a curry cream sauce." Now chunks of stuff in a somewhat shockingly yellow sauce might not appear to be appealing, but sometimes you've got to let other senses but sight take the lead when you eat, you know. For the smell was lovely--somehow not too much of truffle oil, which usually seems to me like the Axe cologne mushrooms must wear when they want to seem all upscale--but more of that curry sauce, all those good Indian spices, turmeric-ally bound. Somehow that worked with the mandarins, that could seem to sweet for the dish, but weren't, but did offer orange's more open citrus taste (lemon and lime seem to close down to me at times, if that makes sense). And then lobster and corn work well, somehow elegant and homey all at once. Wash it down with the Dr. Bill chosen Ommegang Gnomegang and you're a happy camper, promise.