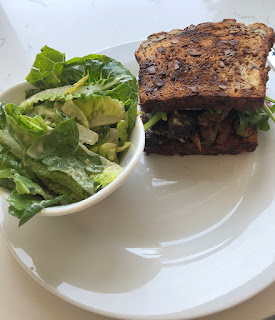 Alessia Patisserie + Café has such a musical ring to it that it’s surprising the name wasn’t the first thing that popped into Alessia Guehr’s mind before opening her jewel box of a spot on East Canon Perdido. But given that her parents, Brigitte Guehr and Norbert Schulz, are Santa Barbara food scene veterans — arguably, the creators of it — who both owned restaurants named after themselves, Alessia eventually realized, “I should keep up the family tradition.”
And that she does, not just in name. Guehr’s team had to demo pretty much everything in what was briefly Miso Hungry to create this inviting urban space of hardwood floors, copper banquettes, and a pastry display that demands damning the calories, as full devouring is ahead. “People eat first with their eyes,” Guehr explained, “so everything has to be beautiful.”
If you want to read the rest of this story, you can at the Independent.
(Photo of the duck confit sandwich mentioned later in the story)
Posted by George at 1:34 PM No comments: 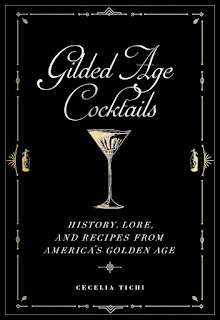 If you’ve ever wondered how historical nonfiction can be dry like a martini and not dry like a textbook tome, you need to pick up Cecelia Tichi’s Gilded Age Cocktails. A professor of American literature and culture at Vanderbilt (and the Commodore who founded that university even makes an appearance in the book, as both a figure and a cocktail), Tichi brings to glittering life what it meant to drink from 1870-1910. Chock full of quotes from primary sources of the day with titles like 1890’s Society as I Have Found It, Tichi makes clear how much lubrication kept this period of history afloat, prior to the double blow of a first World War and Prohibition.
You can read the rest of the review at California Review of Books.
Posted by George at 1:26 PM No comments:

A Review of Richard Buckner's "Cuttings from the Tangle" 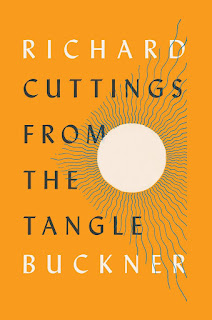 Richard Buckner, songwriter, singer, can open a song with the lines “Tough is as she does, won’t you slump on over and stir my shuffle down,” and you don’t get too hung up on not parsing each word exactly. Part of it is this is a song, and while the melody is simple, it’s still catchy enough in its strummy guitar way to draw you in. Part of it is Buckner sells it with his emotive baritone that helps make the somewhat odd words feel lived in. You get the emotional weight of a relationship from these lines even if you don’t get the outlines of the actors.
Want to read the rest of this review, then do so at the California Review of Books.
Posted by George at 1:15 PM No comments:

Email ThisBlogThis!Share to TwitterShare to FacebookShare to Pinterest
Labels: a start and a nudge, book review, California Review of Books, poetry, Richard Buckner

Review of Alice Waters' "We Are What We Eat" 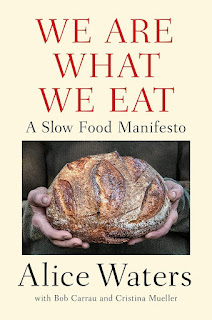 In Charles Laughton’s fantastic 1955 fairy tale noir Night of the Hunter, Robert Mitchum’s curdled preacher is infamous for having “love” and “hate” tattooed across the knuckles of his hands (see Spike Lee and The Clash for just two echoes). As Mitchum puts it, these fingers are “always a-warring and a-tugging, one agin t’other,” but luckily, it’s love that’s won.
Reading Alice Waters’ We Are What We Eat, it’s easy to imagine she’s a preacher for a food revolution with “fast” and “slow” tattooed across her knuckles. And alas, we don’t yet know who will win. But if Waters has the slightest say in it, the whole world will soon be eating slow.
Want to read the rest of the review then do so at the California Review of Books.
Posted by George at 1:19 PM No comments:

Email ThisBlogThis!Share to TwitterShare to FacebookShare to Pinterest
Labels: a start and a nudge, Alice Waters, California Review of Books, review, slow food, We Are What We Eat
Newer Posts Older Posts Home
Subscribe to: Posts (Atom)