One good thing about not drinking past 11 pm--it's much easier to get up and run at 8. So we do that, again, and the group feels like a friendly little sleeper cell of health amidst the rest of the wantonness. One of the runners we most like is Cindy from the Portland Bitters Project, who is anything but bitter but makes a fine product. We're particularly fond of her Super Spice flavor, which she developed for the holidays but it's so popular she makes it year round.

It's one jam it in morning: as I look back on my notes I sort of wonder how we accomplished it all. Mostly by this point of Tales we're very good at not tasting every drink offered and never finishing the ones we taste. It's the only way to survive. Still, there's a sip of Jura Superstition, the middle level of their peaty product (I don't get to taste the full line that afternoon, alas); a run through the Deep Eddy room, with singers doing their best Andrews Sisters and solid Bloodys (you can drink a whole one of those, it's a vegetable!). 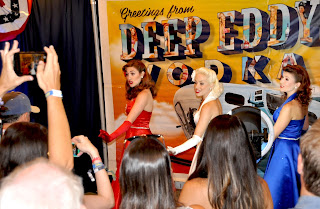 But best of all, there's Mezcal of the Caribbean, or perhaps that should be The Best Little Whorehouse on El Silencio Street. For El Silencio has taken over that Vieux Carre room with the amazing views up and down the Mississippi and built an environment in it. You line up in a hallway and are cheerfully greeted. (Here's the place to point out the TOTC demographic still skews male over female and therefore tends to use the cheesecake appeal at pretty much every turn.) 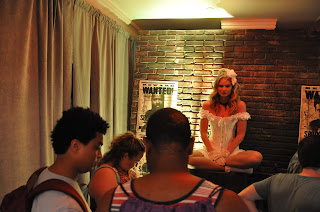 You have to sign a waiver to enter, which you don't have time to read, but you figure how bad can it be? Of course you haven't seen the blindfolds and handcuffs yet. You have to enter the speakeasy style door with the password, "Shhhhh!" And inside, the very crimsonly-lit inside, the house madame, channeling Divine divinely, offers you a wooden slug that has your number on it. In the meantime you drink very tasty mezcal cocktails (I so love the mezcal smoke, and keep hoping it becomes even more of a thing), or look through the far wall's peep shows, little holes that let you view vintage nudie films. 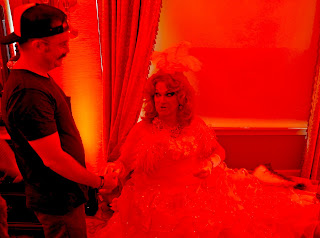 When your number comes up on the board, some fair, tastefully lingeried lasses blindfold you and politely apologize when the handcuffs are a bit tight. Then they ask you to hold a rope and lead you out of the room. You're on the 16th floor, so what could go wrong? After a few turns, a woman tells you to step forward and straddle what's in front of you. And, of course, it's a massage chair. You get rubbed heartily for ten minutes and led out.

We also finally check out the Interview Room, one of Tales' places of refuge for the media. There's usually someone pushing their booze, but even more importantly there are chairs, quiet, and spreads like this one. Turns out a spring roll wrapper around a large very well executed prawn in some Thai peanut sauce is a perfect couple of bites that will make you enjoy a few, until the martini glasses they come in pile up and you feel almost drunk with prawn and peanut sauce. It's a good feeling. 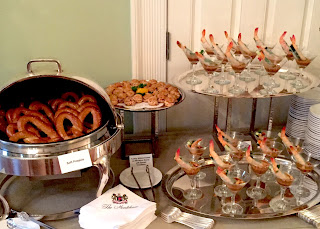 Then the deluge came, as much rain as Santa Barbara has seen in two years in 40 minutes. We want to get back to the Bienville from the Monteleone and are too impatient to wait it out, so I take off my shoes and socks, roll up my pants, and we dash about the flooded streets. All that Sweat Social running was good practice. Back at the Bienville we go to Latitude 29, which has less attitude at lunchtime, especially when the rain is keeping it empty. Turns out there's nothing better than taro chips, especially these, richly covered in spice. The hardest part of eating them was deciding which dip that accompanied them was better, the kimchi ketchup or the Sriracha mayo. Chryss couldn't pass on the vegan option, because in a carnivorous town like NO you got to support the vegan, Green Curry of charred cauliflower dusted with sumac, chick peas, carrots, mushrooms,sweet potato’d rice. I had a shrimp and grits special, because, well, I'm in New Orleans, and even in the tiki bar I'm in New Orleans. I make up for that by ordering their namesake cocktail made of eight-year Demerara rum, passion fruit purée, housemade Madagascar vanilla syrup, orange, pineapple and lemon. It is very good, and I start growing board shorts.

I do not wear them back to the Monteleone, as we've got another seminar, this one intriguingly titled "The Cocktail Crystal Ball: Drinking in 2116." It features a top-notch panel: Alexander Rose of The Long Now Foundation, Dave Arnold, founder of the Museum of Food and Drink, Jennifer Colliau of Small Hand Foods, and Dave Smith of St. George Spirits. They talk about everything, almost too much to get in-depth, from demographics (the hockey stick!), to climate change issues (what will we be able to grow where?), to robot servers (what's a bartender's function?), to Randall Grahm's experiments trying to discover what the American grape should be. It seems encouraging even these people with their eyes on the long game seem so human, as is the room, for Arnold's line, "Give me an alcohol enema or whatever if it's all about the frickin buzz," gets a hearty laugh and Colliau's line, "I'd rather have a decent Manhattan from a lovely person than an amazing Manhattan from an asshole" nearly gets a standing ovation. And I have to admit of the three cocktails they provide us, supposedly time-snapshots of martini variations past, present, and future, it's the present I like. Maybe we are living in the best of all possible worlds. (Plus if water gets crazy scarce, there goes our ice cubes, and that's downright uncivilizing.) 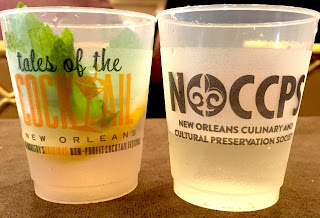 After the event we wander about the Monteleone some more. We do a quick blast through Of Grapes and Grain: Mixing Wine and Whiskey presented by High West Distillery and Quady Winery, wishing we had more time after the panel. Quady's vermouths--the Vya line--are all high class and I discover I have a thing for High West's Double Rye. There are a host of well turned cocktails here, a single room that's enough evidence for all the craft this country is cranking right now.

And in less lofty thoughts, if you're wondering, yes indeedy, there are pool parties sponsored by liquor companies, and we peek at them and feel old. 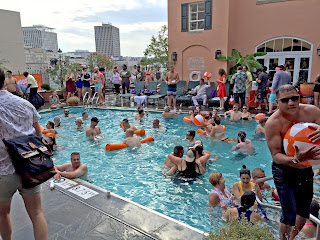 Instead, we opt to go on a long long walk. Out the Quarter, through Marigny, into Bywater, which I sort of sense is NO's Brooklyn but without the attitude. Humidity just slaps the attitude out of you. We even make sure to hit The Franklin on the way, as Novo Fogo, the sponsors of our morning runs, gives you a card for a free watermelon caipirinha, and we figure we've never earned a specific drink more. It's super refreshing, and the bar is captivatingly cool, but it's not where we plan to end up. 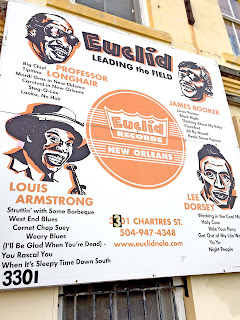 We don't plan on ending up at Euclid Records, either, but I had to share that picture. How can you not love a town so steeped in its music? Instead we head to Bacchanal, a sudden oasis of a wine store/bar/restaurant/outside jazz venue in what seems like a residential neighborhood. You buy a bottle of wine up front (the inventory is 98% Old World, so we went for a Chateau de Brigue rosé), they open it for you, you stick it and a bunch of ice in a plastic paint bucket, and you find a seat in the enchanting garden, ringed with lights and centered on a stage where jazz plays. 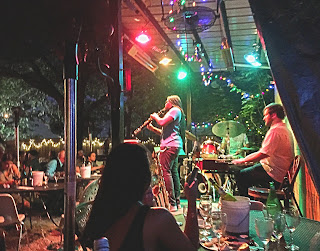 It's the kind of spot you imagine moving into after you've been there for fifteen minutes--so comfortable yet still mildly electric. It doesn't hurt there's tasty bites like bacon-wrapped dates stuffed with chorizo and a gulf fish ceviche with cucumber, citrus, cilantro, yuca chips. We also get an ear of corn grilled and slathered with cheese, and it's a place where the mess that makes offends no one as they all know how good it is and that pleasure is all that matters. The trio about was really impressive--even pulled off Miles Davis' "Freddie Freeloader."

After a leisurely Uber ride back the Quarter--nothing like a driver who stops at intersections even when he doesn't have the stop--we, no doubt led by me--take the idea of bacchanal seriously and head out again from the hotel. Since we failed to get into Napoleon House the other night, we go tonight as you have visit and Pimm's Cup. It's another very New Orleans drink that is most associated with one bar (does any other town have so many such spots?), and it's another cocktail made for sipping on a warm day. Of course even the nights hold the heat, so a Pimm's Cup is just fine then, too, right down to its cucumber slice garnish. We drink on the inner courtyard and get to watch people leaving a wedding in one of the upstairs fancy rooms, and dressed up children are always fun. (It's one of the best reasons to have any.)

Speaking of not backing off the bacchanal, we also realize, to our horror, we have not had dessert, and even worse will most likely be kicked out of town if the people in charge discover we've been here for five days and have yet been powdered-sugar covered at Cafe du Monde. Tourist trap, perhaps, especially since the sugared floors can get sticky at times, but these beignets are a delight--doughy, puffy, hot, and a sweet sweet rush. That's how good New Orleans is--even its cliches are brilliant. 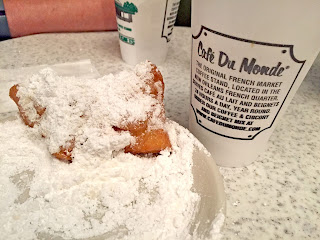