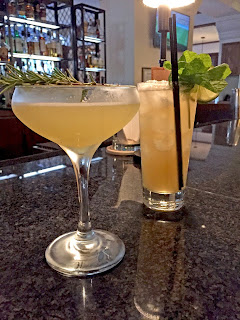 If you're tired of too much frou frou at the bar--did the barkeep just use an atomizer to spray something in the general vicinity of my glass?--head on down to Finch & Fork at the Canary. There's a new head drink sheriff in town, Joe Dohany, born in Philly, most recently from Seattle, and he's a classicist a heart. Part of that is he went to culinary school, so thinks in chefly ways. What will make something taste good? What are the fewest ingredients to get there? What's the history of this delectable concoction?

Take his local twist--and there's the chef part again, plus a tip of the cap to his compatriot at Finch & Fork, the talented chef James Siao, striving to do the fresh and local bit anyone who's any good does now--on the Vesper. He makes it with both local gin and local vodka, Calyx from Ascendant and Cutler's Vodka. That Calyx is something--Ascendant's distiller Steve Gertman works with Raj Paar, of all people, to craft a winemaker's approach to gin, so much so they even give each batch a year designation (more to admit they might play with the botanical mix or land different sourcing year-to-year). And, to top it off, Dohany uses Cochi Americano instead of Lillet, for he says Lillet changed its formula since the classic Ian Flemming Bond days, so it's sweeter now. That Cochi Americano makes the drink quite dry and unique, especially if you're used to ordering Lillet-made Vespers.

"My goal is to help make the spot one cohesive place," Dohany says, "to make the restaurant and bar one brand. I want the bar to be a place the locals can come in to have a few drinks, maybe some food and drinks, or just have some fun." He also has some sharp observations between the Seattle and Santa Barbara bar scenes, claiming, "Seattle is much more spirit-forward, with that sense 'we dink Frenet all the time.' Here drinks are lighter, more refreshing, easier. It's about cheerful cocktails versus brooding cocktails."

Perhaps the best of his new lot (and the menu still features favorites like the Figueroa, Guava Margarita, and Delayed Flight) is the Witch's Back, a more crafted Perfect Greyhound, perhaps, with Bulldog gin, Strega, pamplemousse rose, lime, and orange bitters. So certainly you get the citrus with the grapefruit and orange, but the Strega--which is witch in Italian--adds its unusual herbal oomph of pine and mint to confound things in a fascinating way. Dohany garnishes the drink with a rosemary sprig across the up glass's rim, so you get that scent right in your nostrils each sip, too. Lovely.
Posted by George at 11:05 PM