If you're going to do a conference, you have to do panels, and day 3 was just such a day. Of course, most conferences don't offer you a cocktail or spirit sample or six, so there's that. So to prepare for sitting and drinking, we Sweat Socialed again. And this time afterward and safe in the Monteleone we got to visit a juice bar, hosted by Tanqueray. Yummy watermelon etc. juice topped with Tanqueray No. 10 gin--not a bad reward for a 5K of oozing our way through the French Quarter. Even better, people make extra room for you in line when you stink a bit, even in the South in summer where a bit of musky scent is as expected as a love of grits. Even best, there was a Kick Start Coffee Bar, too, so we got to latte just for having those bracelets. Gotta keep all the crucial bodily fluids balanced at something like Tales of the Cocktail.

We wanted some ballast, too, so after showering, which is more a reset than anything even slightly lasting in that humidity, we went to the nearby Cafe Beignet, which I remembered fondly from our previous visit. This time, not so good--if you can't nail your namesake you've got a problem. These beignets weren't puffy enough or fresh enough. Really are only food fail all week, though.

We checked out shops, including the Cocktail Kingdom pop-up shop. We wanted many things. Of course one of the draws of cocktail culture are all the nifty gadgets and tools that harken to days when design was something. That history, that continuity, that artful line. And sometimes a personal one, like Wyborowa Vodka serving kielbasa with their cocktails, and making me feel like a Slovak kid in Scranton PA again. It's odd how much stuff kept taking me back to my pre-drinking days (and there were some, if long ago and hard to recall).

Somehow it was already lunch time and we visited one of the few vegetarian-friendly spots in town, Green Goddess. Not that you can't get meat, but most items are prepared with and without an animal protein. Chryss went for the Vegi Cuban Luau (they could at least spell veggie correctly, but that's really my only complaint), made with kale, arugula, Manchego, Creole pickles, etc. and I had a special crabmelt, and our only regrets were we didn't return for the rest of our trip to try more. Why can't a place in Santa Barbara do such a cool menu?

After lunch was Panel 1, "Big Gin, Small Gin," where everyone made nice and the big producer, Bombay, insisted despite the volume, it was still a small batch process. The moderator Raj Nejera, House of Bombay Global Ambassador, opened saying, "Gin is cool, it's hip, it's fab, we have the fucking martini for fuck's sake!" and everyone in the audience exhaled a happy, Vermouth-scented gasp in agreement. Let's face it, Bombay products are tasty, and you can't evade the conglomerates easily if you want to be seen in public.

That said, the smaller distillers were doing some cool things. Mike Enright from Gypsy Distilling and the Ginstitute (I went to the wrong college), poured his Portobello Road, an on-the-nose London Dry that made you thirst for quinine. Even more impressive were the two gins from New York Distilling Company, repped by co-founder Allen Katz, who looks like he should have starred in Hal Hartley movies. One was Dorothy Parker, and she showed up herself! [Sorry it's taken so long to get a photo into this day's blog!] 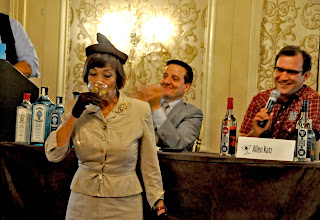 Yes, she recited "after four I'm under the host." The top gin for me turned out to be New York Distilling's Perry's Tot: at 114 proof it's Navy Strength. (PS, don't mess with sailors, evidently.) Katz's line when we tasted it, "No one coughed, that's all I care about." And it is sneaky smooth for its power, a historic style brilliantly revived.

We learned more about gin, but I don't want to bore you. Take me out for a martini and I'll tell you the rest.

The second panel was titled "The Bartender Spy: Frank Meier." It kind of lied as there's no definite proof that Meier, who was the head bartender at The Ritz in Paris for decades, actually did help the Resistance during WW II, but he's a fascinating character to hear stories about for an afternoon. David Wondrich from Esquire was one of the head sleuths on the case as to what Meier was, and an academic historian would love his manner, with lines like, "He was the first, not really the first," as he offered ad re-thought in front of us. Plus we got to drink a Bee's Knees (gin, lemon juice, and honey) that was all the elegance of The Charleston in a glass. 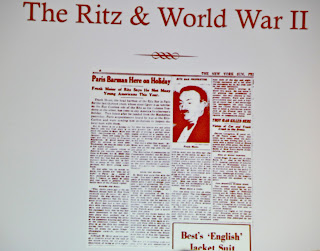 Somehow we also squeezed into the last half of an engrossing demo called "Herbs, Spices, and Secrets: Explore the World of Amaro Montenegro." Not only did it feature this cool box that seemed designed by a soused Joseph Cornell 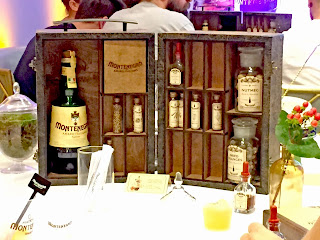 but then they wanted you to make your own cocktails at the tables you were sitting at. Hence my quote of the day, "I wanted to play with those tools." No, not the gorgeous Italian men who seem to market all Italian distilled spirits, but the barware at each table (see earlier paragraph about shakers and shot glasses and strainers).

Perhaps there was a nap. There was definitely a stay at the event billed "Discover the Legendary Elixir" at SoBou. While the promised Polish soothsayer never materialized ("your future will contain less saying of sooth"), and we waited out the Zubrowka rep till she gave us free drink tickets (the media wristband could be a plus, indeed), and we watched dancers with prosthetic ears (vodka makes you grow pointy ears? perhaps only if you're a fairy?) 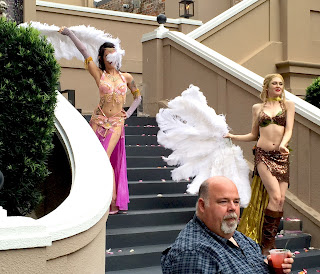 the best part of the event were the two bartenders. One, the woman in charge as she heads the SoBou program, was Laura Bellucci. Coolest thing about that was she was a roomate of our daughter in college. Kids these days! She was featuring a drink with smoked rhubarb that was one of the cooler things I had all week. The other bartender was Ty Izquierdo, who happens to be a Gaucho. Even won the Independent's readers poll best bartender vote back in the day. So this world was very small, but very warm and fuzzy for a bit, and not just because of the alcohol. Here's Ty. 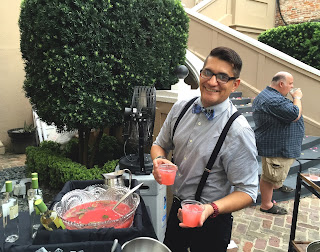 That's all just prelude to the official Welcome Reception thrown by Absolut Vodka at the ACE Hotel. A huge brand on its own, Absolut is now owned by even huger multinational Pernod Ricard, so that means there's a ridiculous pile of dough waiting to throw you a party. It's also funny they don't tell the media the dress code is white, so we're very easy to spot, the dirt amidst the gussied up snow storm of the paying guests.

Absolut totally delivered, though, with each room its own mythic, immersive world starring two cocktails and a model/actor it wasn't clear you were supposed to interact with, as they tended to be serious/fierce/imposing. Enough to scare you into drinking. Like, perhaps, test tubes of Bloody Marys from the steps on which Bloody Mary stood. (Each room had its own cocktail delivery system, too--no simple glassware here.) 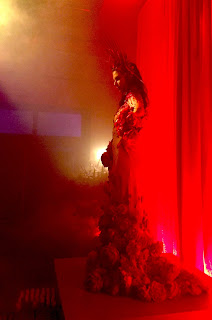 And then there was Oak guy. The drinks weren't as tortured as he appeared. And you know us, we like our smoky. Not something you usually get in a vodka. 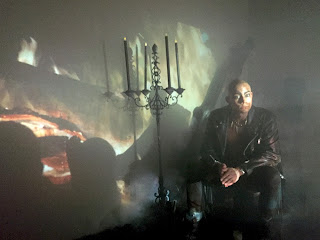 Finally, we were pretty glowy our selfie selves. 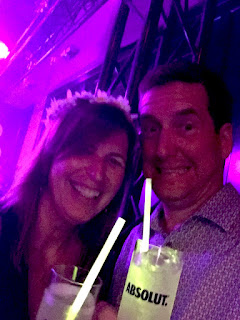 But so was the town. Although this could have been a different day--such is Tales, when time stands still, reoccurs, moves forward for you to ride its hip pocket. 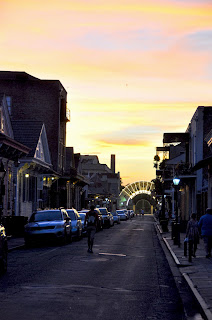