There are many ways one can be welcomed into New Orleans for Tales of the Cocktail, a conference about drinks and those who love them, and do not giggle--it's more serious and there's plenty of money to prove it. Chryss and I were going for our second time, after attending in 2012, so had our hopes high. George Eats promises to take you through a day-by-day account, as much as I can remember, and luckily there's a great app to help. (How did people drink and remember even where they lived before smart phones? The world is a much safer place.)

So, you can be welcomed by being on a plane with all sorts of potent potable poobahs, from Brandon and Misty from Santa Barbara's fine Good Lion (and soon Test Pilot), to an Angel's Envy rep sitting next to you, to a Bacardi rep who commandeers the cab to downtown a bunch of you are in and puts it on his expense account. Or you can be welcomed by the Hotel Monteleone, ground zero for TOTC and our home for the first few nights of the adventure (until the rates went up for the weekend). Either because we stayed once before or because we're ID'ed as media, we land a lovely room, with all of downriver New Orleans out our window. 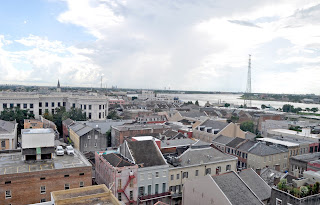 That's even better than up-river, since all the ugly/tall/new/can't pretend it's another century buildings are out the other side of the hotel. Why yes that's a steam-powered paddle-wheeler our way. Since we flew versus the time changes, we're pretty much famished, having left LAX at 11 and now it's 6 by the time we're ensconced in the lovely room. The good news is we've got reservations for the mere blocks away Kingfish, that wisely bills itself Kitchen & Cocktails. For here are the cocktails we soon dove into: 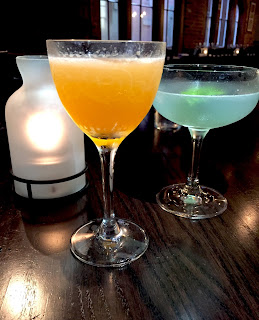 Perhaps they did glow all the way down. That's a First Word  on the left and an Amelia Earhart on the right. The Earhart is their clever take on an Aviation (get it?), featuring Ford's Gin, Lemon, Luxardo, Rothman's Crème de Violette, but also some fresh basil to give it yet more aromatics and drag the bar a bit closer to the farm, or at least the windowbox. Lovely. But it's the First Word that proved how simple cocktail magic can be at a mere four ingredients: Aperol, Green Chartreuse, Del Maguey Mezcal, and lime. What if the Negroni and Margarita had a baby in a rough Mexican back alley? Maybe, but that description makes the drink seem more a stunt, and not something deliciously integrated. My Tales was off and running with that one.

Of course, hungry at a place with too much goodness, we ate too much. If you ever go, you have to have the blackened barbecued shrimp and crispy grit cake that failed to survive long enough for a photo, plus our fingers where lusciously buttered when we sucked the heads (those kind of shrimp, yes). You can also get a panzanella with more greens in it than you'd expect in New Orleans. You'll start to hunger for those. Since greens usually means collards cooked way down with bacon to crisp them back up, which is fine but nothing close to tasting healthy.

And while I had a handsome hunk of a porkchop, with some of those greens and rice dirty in a way that made me feel appropriately sinful, too (you know, gluttony), Chryss ordered wild Louisiana black drum on the half shell tacos--a time a deconstructed dish seemed more designed for flavor than clever. See photo below. The groaning board brought to her plate also featured a slew of accoutrements--corn tortillas, collard green chimichurri, citrus slaw, green tomato chow chow, and Sriracha aioli--things I almost wanted to slather directly on myself they were so good. 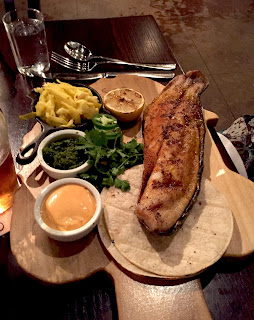 We refused to even glimpse at the dessert menu.

After a bit of a walk, both as a way to hope some calories might burn and from our desire to be in New Orleans, where the spirits aren't just from alcohol--a town can too have a soul--we got back to the Monteleone and had to enjoy the Carousel Bar, old time haunt of literary giants like Tennessee Williams and William Faulkner and Truman Capote. So we hoped maybe some of their greatness might rub off on us. Alas, the actual carousel, and the bar does very very slowly revolve around the bartenders' pit, was too crowded, but a table at the window meant we got a show both inside and out as Tales-sters poured into town, their tattoos practically glistening with excitement (or sweat--this is The South in July, aka god's hint for humans to invent mint juleps, air conditioning, a drawl, and fainting couches). 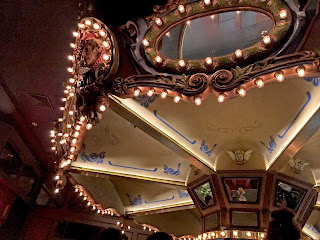 We both had to View Carre, for as the menu says: "This signature cocktail of the famous Carousel Bar was first mixed by Walter Berferon in 1938." And it's a lovely elixir featuring Bulleit Rye Whiskey, Hennessey, sweet vermouth, Benedictine, Angostura & Peychaud’s Bitters. What's better as a way to say good night, and can't wait to see and drink you tomorrow? For here's the look you give thinking it all over: 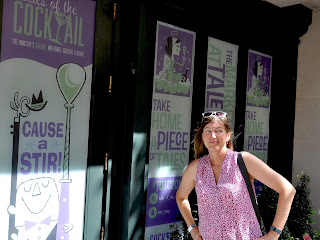