It's the last day, and like any last day of any vacation, that's all sorts of sad. But this seems particularly so, as a week in New Orleans is a week of finding a town's soul. No place seems so lived in and yet big enough to give you a space to live there too. It's too ripe, too raw, too lovely, too lost. Delicious and delirious in its dishabille. 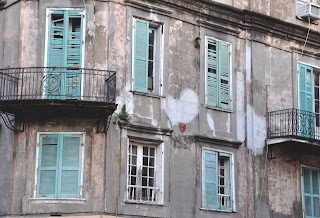 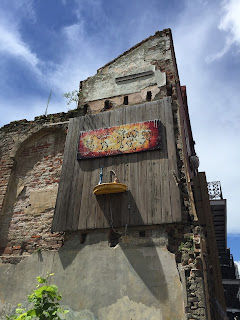 And our friend Voodoo Bone Lady told us a great story about it that we can only hope is true. Supposedly that painting on the wall a husband bought for his wife and hid in the attic to give her as a surprise. That was 2005. Their house was completely flooded by Katrina, except for the attic, where the painting was secretly stored away. The couple moved to the French Quarter, which remained unflooded, post-Katrina. Then, one day their house collapsed; luckily no one was hurt. The only thing left standing--the painting and the vanity underneath it. So--is the painting lucky, a survivor of two calamities? Or is the painting a curse, a cause? The owner's going to leave it hang. But curse or cause is the ever confusing question, isn't it, especially in a city like New Orleans. You tell me what a cocktail is, for instance.

While I wait for your answer, let's go to breakfast. We head back into the CBD, this time to a place even more a neighborhood joint, Majoria's Commerce Restaurant. Despite not being local, we're greatly greeted and even better fed. I have their breakfast biscuit poured deep in a cheese sauce that gives cardiologists nightmares, rich with jalapeno and sausage and "seasonings," a spicy that ratchets up the temperature of your whole body, not your mouth. Of course, two eggs over easy over the top. It's sloppily scrumptious, the biscuits still firm enough to hold all that sop. And it's all of $5.50. Now that's a delicious deal. 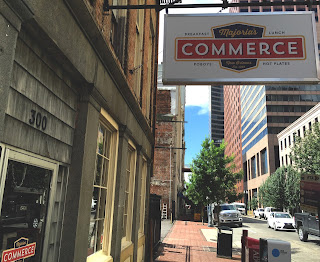 We spend the rest of the morning just walking, taking it in, wishing to leave a bit of our spirits somewhere somehow too. We think about doing some quick museum-ing, but the Cabildo and Presbytere are both closed Mondays. So we do a quick peek into the St. Louis Cathedral, that is the center of the center of the Vieux Carre, and catches clouds. 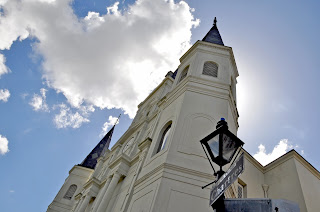 Don't tell my dead mother, but I'm long gone from the Catholic church (ok, she knew even before passing, sorry, Mom), but that doesn't stop me from being a bit gobsmacked in the midst of mans' tribute to the holy. I mean, clearly people had to believe to build places like this, or I hope so. I mean, we need faith in something, although I sort of wish it was each other and not a super power that can be as indifferent to whip a Katrina on us. 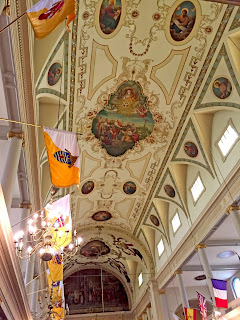 Of course, we also paint pretty to sell our wares, so maybe faith is sold at fifty cents a line. This low-relief skyline enchants me either way. 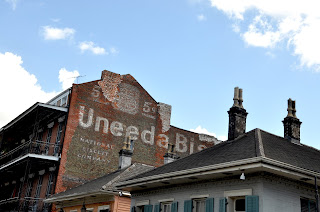 And we opt to close very much tourists, at JAX Brewhouse, in a building that was clearly much more a brewery once, and now is a sort of sad mall-ish thing, if right on the Mississippi. You see, usually it's hard to see the river from the Quarter as the levee blocks your views (don't complain, it keeps you on dry land, too). But the Brewhouse is on the second floor, so you get a sweeping view. Plus they had a TV on with closed caption, and who knew that General Hospital was still such a dramatic thing? I mean, gun-point hostage situations on a Monday? The world is too accelerated. We need beer samplers at 1 pm on sticky days. And the Natchez, so close, yet so Twain. 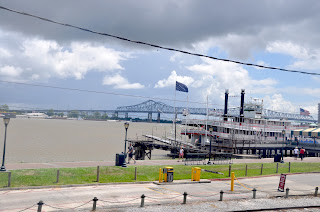 Luckily, there's one last very Tales moment. Hendricks Gin has opted to provide an exit bar, even taking people to the airport afterward. It's at Sucre, which we'd passed some in our travels but unfortunately never visited because gorgeous macarons.You get four different cocktails and could have chair massages, but without handcuffs and blindfolds so what's the point, but even better there are virtual reality booths, which are pretty amazing if really just the most hyped-up ad you've ever experienced: you even get scent wafted at you and handed a drink at a planned time. If the future is all sell, but this good, I surrender. 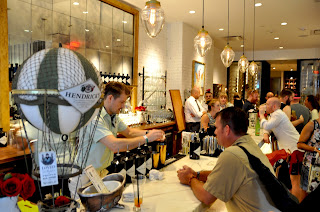