This day begins like most cocktail conferences, with a 5K run. Novo Fogo has sponsored get fit morning events, one of which is a run with historical tour put together by a New Orleans outfit called Sweat Social (as if that's not a term that defines New Orleans in the first place). Turns out we will do these four of our mornings as there's nothing quite like the righteous feeling of caring for your body by hurting it with exercise before a day of treating it too well by hurting it with a surfeit of booze and food. Running for 7 minutes, stopping to hear some local history, and running again is a fine way to beat the NO heat, too. Plus the two guides were great--running lead Gracie led us at a doable pace that left us time to pick our way through the treacherous French Quarter sidewalks, broken to the point it's practically a trail run, and Frank, our historian with Stravinsky tattooed on his leg, was both wise and entertaining.

The run might do something weird to me, as I have juice after it. Luckily we have a 10 am appointment to tour a micro-distillery, and nothing wipes the smug healthy glow off your face like sampling gin and absinthe well before noon. Atelier Vie is in a complex called ArtEgg Studios (a converted old egg refrigeration warehouse), and your cabbie will argue with you when you try to explain how to get there. He needs some absinthe. 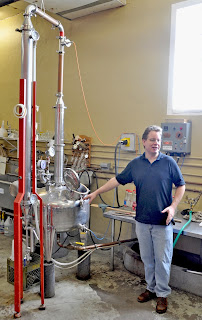 Proprietor Jedd Haas almost seems more excited about the engineering problems (can you guess his background?) than the creation of liquor end of his business, but his Euphrosine Gin #9 Barrel-Finished Reserve is quite tasty and a bit unique, as gin with a bit of oak you don't come across everyday. As for Euphrosine, she was the Greek grace of good cheer, and New Orleans actually names some of its streets after graces and muses. Sure they're unpronounceable, but they mean so much. Haas makes both a red and a green absinthe, too, the red at 136 proof. He makes you taste it with water. You will be glad, even if you're not drinking it at 11 am.

We head back to the Monteleone to activate our bracelets, the ones you can't take off, so you scream "Tales-goer!" wherever you go in town even away from the conference, like Robert Donat trying to hide his handcuffs throughout most of The 39 Steps. (How did Hitchcock never make a film in New Orleans?) That's a bit annoying, as is having to use the chip in the bracelet to "sign in"--well, ok, sure--and out--hey, why are you tracking me so much?--from every event you attend.

Once we've been electronically tracked for less than three minutes we also get to taste Woody Creek Bourbon (yum – it’s a week of sip and yum) and have also received their gift bag that recalls the survivor’s kit Slim Pickens opens in Dr. Strangelove – complete with hand lotion, breath mints, and a condom with the tag line “It’s the wood that makes it good.” That leads to walking through the hotel lobby where Lillet is just setting up: 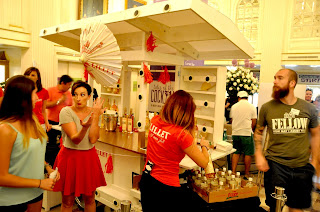 And there's the first instance of The Corner Bar, just off the lobby, which shifts sponsors and moods twice a day throughout the festival and is a spot we do our damnedest never to miss--sell to us, baby! It kicks off with Russian Standard Vodka with solid cocktails and for some reason, gherkins. Which reminds us we need lunch.

Today that's the nearby Felix's, an oyster bar so we take advantage of the bar part and order Bloody Mary's. I get the Felix DeuxLux, which comes with a shrimp hanging off and an oyster aside, and wonder if I could do enough of these as lunch before I got drunk on the drinks. We need po-boys (we've been in town 18 hours without ones), so get the shrimp and oyster combo, and Chryss gets the grilled shrimp (silly woman, trying to be vaguely healthy and skip the fired stuff), and we both get big smiles on our faces. Far from fancy, perfectly perfect.

Back at the Monteleone, after passing through the ever-unpleasant ad hoc smoking lounge on the sidewalk in front, there's a new Corner Bar, and it's Tequila Exotico. It's an old brand that's finally got some money to give it marketing muscle and that's good as the product deserves it. Plus they have a woman who will paint on you, so some Halloween-obsessed person I know gets a skull on her arm, but even better, she makes these great ghoulish friends too. 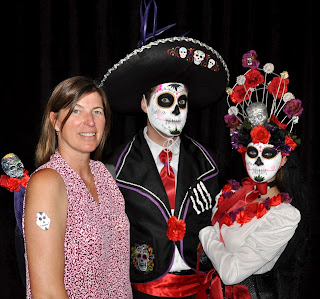 Chryss wants to get her haircut, as she was too busy at home to do such things. While she's getting gussied up, I wander about town, including hanging out in Marigny and the wonderful shop the Louisiana Music Factory, where I want to buy everything and learn all I need to know about New Orleans music. Sure, that means I might have to stay here for the rest of my life, but...hey, this could be a plan. Where do I apply for a grant? I do end up at d.b.a.http://www.dbaneworleans.com, instead, to sit and drink darn good beer (and it turns out the Mets are playing the Cubs on tv, to boot). There's something called a Snopes Family Pilsner, and the Faulkner-lover in me can't resist, but I like even more the Parish Brewing Company Envie, a pale ale with more hops than some IPAs, but without all the alcohol. Because you're drinking to beat the heat, not your liver, here.

Chryss shows up and we head further into the Marigny, because you can't just hang out in the Quarter the whole time if you want any slight sense of what the whole town is like. It's a nice haircut. 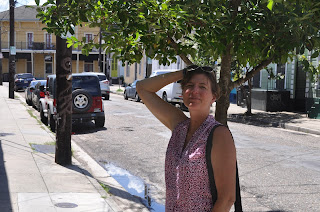 We have dinner at Cafe Feelings, woah-woah-o-woah...which is a bad name for, well, just about anything, but let's give the place a pass since it's been around since 1979. The food was solid but not the best of the trip, although it's hard to argue with pommes dauphine, fried souffled potatoes whipped with farmhouse cheddar and scallions that you dip into creme fraiche because it's not enough enough.

Besides, we're holding tight for a party that doesn't start until 10 pm, which is late for us oldsters. (The average TOTC attendee looks about 30, but none of them call me Pops, so it's all ok.) We're going to The Spare Room presents the 5th Annual Ode to the Bowl in Partnership with Diageo. That's the official title, but mostly what it means is a chance to party for free at the famous Rock n' Bowl in Mid-City. Yes, this is town with concert venues at bowling alleys. There's lots of good punch, too, like a Smokin' at the Ballpark: Bulleit bourbon, Lagavulin scotch, lemon, barbecued watermelon shrub, Miller High Life. The first two ingredient totally outclass the last, promise--the Miller is basically "flavored" sparkling water. And lots of eats, too, including a square pizza with a thicker crust that took em back to Scranton, PA and my childhood visiting my grandmother. Hadn't thought about that pizza for years.

Even better, the special music guest is Freddie King, and since most folks are drinking or watching the bartender bowling competition (when a lane got a strike, they were serenaded by mariachis), we had King mostly to ourselves. I knew I wasn't drunk, because if I was I would have definitely tried to steal his suit. 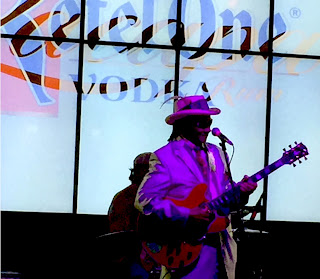 We get back to the hotel by talking our way into a guy's Uber, who turns out to be some 40-year-old from Dallas who owns a string of bars, or so he says. He wants to walk Bourbon Street, and we leave him there, for as nice as he was on the ride, that's sort of creepy to do on your own if you're older than 30. But New Orleans allows all. Thank you, dear city.