We are a bit Absolut-ly slowed this morning, so do not run, but walk quietly to the Kick Start Coffee Bar, and can't resist a bit of gin and juice from Tanqueray because it's good, there, and free. I'm not sure I've made it clear yet how well-branded TOTC is, with lovely little logos lurking practically everywhere. It makes the event all the more special, even at those private moments. 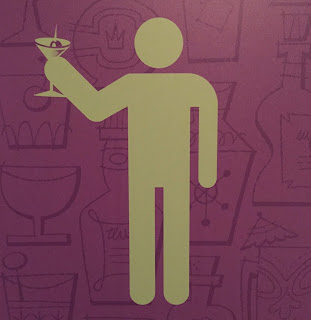 There is a fascinating Lobby Bar event featuring the Wild Hibiscus Flower Company that markets actual hibiscus flowers that come packed in syrup all the way from Australia. It makes for a very ornately gorgeous cocktail accoutrement, but to be honest while edible, they still seemed too fleshy for me, at least before noon. Perhaps in a champagne flute at midnight under a gibbous moon I'd feel differently, at nibble on them as if they were a lover's neck. I've got a jar of them to experiment with, so will let George Eats readers know. 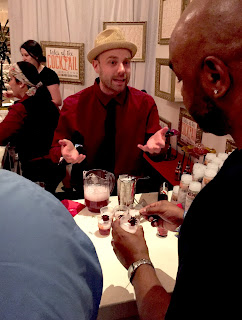 This is also the day we have to, sadly, switch hotels. I can't say enough about the Monteleone, its grace under the raucous pressure of Tales--so many people, events, alcohol-aided volume, elevators a-brim with revelry. The staff is ever calm, helpful. Somehow the rooms remain quiet, the escape from the lobby a move to a peaceful paradise. But, they also raised the rates for the weekend, so we move on a few blocks away to the sister property the Bienville House. It's got a rep, so when we check in we ask the desk clerk, "Is our room haunted?" and she replies without missing a beat, "You'll have to tell me." We do not experience any ghosts, nor do our phones take photos of us while we're asleep, which is supposedly one thing the spirits do--when did the dead get so technologically savvy? It is a noisier hotel, though, partially because we're on the third floor, not tenth, and we're also much closer to the elevator. Evidently the fear of dying in an old hotel's elevator make people shout a lot while waiting for it, just in case they only get to scream one more time, and at that it would be a scream cut off mid yell.

This is also the day we plan to meet up with Santa Barbara-New Orleans (yes, the lucky devils live in both places) Melinda and Steve to lunch out of the Quarter. They take us to Liuzza's, a Mid-City establishment around since 1947, except for the Katrina stretch when water flooded 2/3 of the way up the first floor. It's not where tourists go, even after it got highlighted in David Simon's Treme. You get called hon by the waitresses. You get a frosty goblet of draught beer you hold with two hands to be safe. There's lots of red gravy, as this is New Orleans by way of Italy, a connection people don't realize as much. (It's not as old and glamorous as all the French and Spanish influences, but it rings true through many neighborhoods.)

I go for their famous Frenchuletta, a take on the muffuleta that comes more as a sub than in a giant round bread. It is ridiculously huge, all sorts of Italian cold cuts and most importantly an olive salad dripping with oil that is disgustingly delicious. I get about 3/4 of it down, which I consider a victory. Chryss orders the famous (everything here is famous, as people have been ordering it all for eight decades) Pasta Spinach Lougia, basically spinach, garlic, and olive oil on pasta, and nearly halfway through our waitress stops by with more spinach, saying, "Sorry, it didn't look like we gave you enough." It's the kind of place where mommas never feel there is enough. It's a kind of instant home. 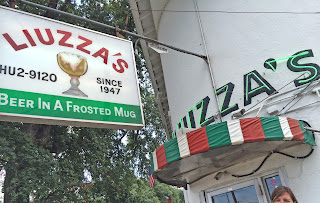 The afternoon was a quick tour about some tasting rooms. It seems amaro is the THING right now, so everyone needs one, even if they don't call it an amaro. Exhibit A, meet Bruto Americano by St. George Spirits. (The call it a "bitter aperitivo liqueur.") So one had the opportunity to make  the rounds of bartenders having fun with the new product, all in the Vieux Carre room of the Monteleone, aka the top floor. So it's worth doing just for the view, but the drinks were darn good, too. (At this event I also discovered St. George's Green Chile Vodka--if you want something with a bit of heat, hunt this out.)

Exhibit B: The other tasting room, a crazed mass of people, was run by Fratelli Branca, makers of the classic amaro Fernet-Branca (which will surface again Saturday, just wait). I might just be bitter--no pun intended--because we didn't win the bike in the raffle they held, but overall these cocktails didn't do it for me--they tended to be a little sludgy and one-sided.

The evening then got messed up because we thought we were going to a Meet the Distillers event, but it was not clear press wasn't allowed as media at all, and once that became clear, well, this press wasn't going. (Sorry, distillers! Would love to have written about you but I wasn't allowed in. Talk to your favorite TOTC representative.) So we wandered a bit, taking in the Mississippi River some (we learned from our Sweat Social runs it's 250 feet deep at New Orleans!), and thinking we'd finally end up taking the free ferry across to Algiers one day this trip. Alas this didn't happen.

So instead we hit one of the city's most famous spots, the Sazerac Bar (snarky side note--do you also want to punch the people in the photos on that website?) in the Roosevelt Hotel. First, there are WPA murals in a hotel owned by the Waldorf Astoria Corp. There's America for you in a nutshell. Plus this is a bar Huey Long would hang out in (Long seems quaint with Trump around, no?). I get a Sazerac, of course, that simple, simply perfect mix of sugar, bitters, rye, Herbsaint, and something the NO humidity adds you don't get even when you make them properly at home. Chryss has the Ramos Gin Fizz, a preposterous yet gorgeous concoction: Hayman’s Old Tom Gin, fresh citrus, cream, egg whites, sugar, orange flower water, shaken until frothy and topped with club soda. 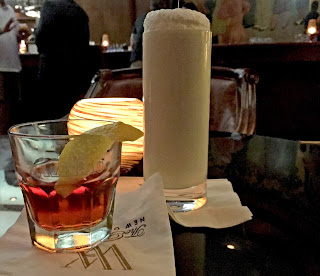 These drinks aren't cheap--you pay for all the marble in the Roosevelt lobby--but they are luxurious.

The rest of the evening is one of the TOTC's Spirited Dinners--Thursday the whole town is a-buzz with restaurants hosting crazy drink menu matched meals. We get invited to Smirnoff's celebration of the 75th anniversary of the Moscow Mule. It seems the simpler the cocktail, the more detailed the origin story must be (just try to tease out how a martini was born), and the Mule has a doozy--Hollywood setting, businessmen down on their luck, heiresses with copper mines. This dinner is a kind of dinner theater--they actually act out the invention of the cocktail between courses. Fake dinner guests join you spreading gossip and lies. It was hokey fun. It helped the food was very good (but you can't fry an oyster and call it a shooter, folks!), and the event had a bit of historical aura going for it, too, taking place at the lovingly restored Little Gem Saloon, where some guys named Louis Armstrong, Jelly Roll Morton, and Buddy Bolden played back when jazz didn't have a name yet. 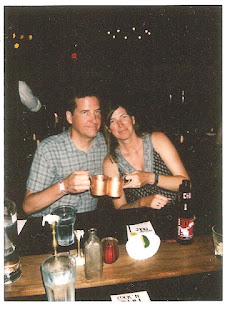 And then there's the Mule itself. It almost seems too simple--vodka, ginger beer, lime--to count as a cocktail. But simplicity is one of the joys of drink, for sometimes a quick prep is everything. (You had that Monday, too, didn't you.) Cold, refreshing, zippy, with a hidden alcohol kick. Why not. Plus it goes well on a steamy New Orleans' evening with a blackberry pop. That seemingly gimmicky copper cup does it keep it icy. 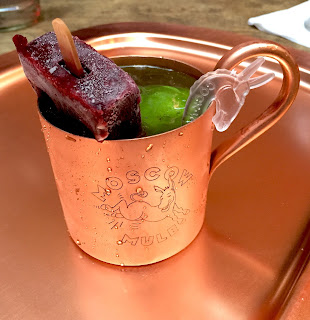 Then there was yet one more huge bonus to this event, the music, for pianist David Hull and singer Meschiya Lake would have made the old ghosts of the Little Gem proud. Lake, in particular, sings like a modern Billie Holiday, with a lot more tattoos. This photo doesn't do her much justice, but you'll get a great sense of her talent watching this video. 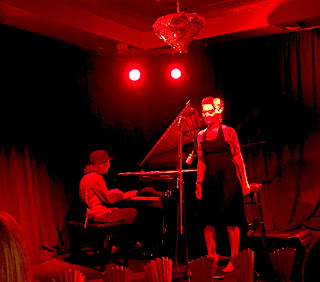 We get back to the Quarter at almost 11 and figure, it's Tales, time to nightcap. We try to go to Latitude 29, an acclaimed tiki bar in our hotel, first. They close at 11, and don't want to seat anyone for drinks even at 10:40. So we walk the few blocks over to Napoleon House, where the Little Emperor never came to live although they wanted him to. (One of the few facts that make me feel pity for Napoleon.) Alas, it too closes at 11. New Orleans never fails to surprise.