Hope Is the Thing with Anchors

As much as I love living in Santa Barbara (I mean, it's SANTA BARBARA), it's great to get out into the bigger world every now and then and see how real city folk live and eat and drink. Turns out that if the bigger world = San Francisco, you pretty much can't go wrong. It certainly helps we stayed at the Hotel Vitale,* an Embarcadero-crossing away from foodie nirvana the Ferry Building†. But we also Open Table researched our way into Anchor & Hope, and found a true delight.

One thing that's endlessly charming about San Francisco is all the rewards that await you down alleys. That could be a inventive cocktail haven like 15 Romolo, tucked away amidst the strip joints and Beat Museum off Broadway in North Beach, or it could be Anchor & Hope, whose address is 83 Minna Street, but the min- part is more of a clue than the Street part. That said the place just oozes charm, huge and airy as it's a renovated turn-of-the-last century mechanic's warehouse and all decked out with things you'd see by the sea. Made me homesick for my college days in Baltimore, but back then Bawlamer wasn't so polished, that's for sure.

A&H brings together two wonderful things--great beer and the choicest seafood. They even want you to follow them on Twitter if you're a beer geek, they're that into the updates. And a fine list they have, both on draught and bottle. We stuck to the tap all night and were more than happy pairing up the food with the suds, brews from the familiar (North Coast's La Merle) to the not (Linden Street's Burning Oak Black Lager). You can check the list yourself, but do note the perhaps drunken-counting-typo: that beer sampler says "five" beers but clearly lists, and delivers, six.

The food menu is short-ish but that's a blessing, as you'll want everything. Somehow we passed on the oysters and clams, although everyone around us didn't and seemed happy as, well, you know.... Instead we opted to share a starter and a salad (a simple, let it speak for its greeny self mix of wild arugula, pickled fennel, roasted olives, shaved grana padano in a light lemon vinaigrette). That starter was a clever item called salmon pastrami--house cured, then smoked again (if I remember right). It's heavy on the salt, but rich on the taste, and made me wonder what it would be like in a Reuben. At A&H it comes with a perfectly fried egg atop waiting to go gooey, potatoes roti beneath to provide ballast and yolk absorption, and a scattering of sliced asparagus full of spring (both the season and the texture). A lovely dish. 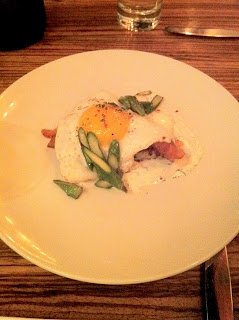 My companion opted to order another app for her main, but when it came out it looked like a main so she sure didn't get gypped.The scallops were seared expertly, paired surprisingly well with their bed of kohlrabi and mustard green, and then set off by the apple miso broth. Lots of layers of flavor all adding to something unexpected. And speaking of surprise, the scallops come with tuna very thinly shaved adorning them and waving. Really. For a long time. So if you get unsettled by your meal moving, it might not be the dish for you. 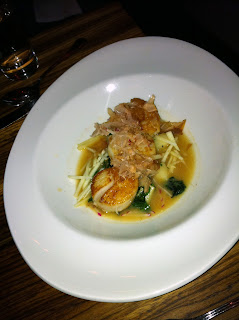 I more than enjoyed the cod with pork belly (I cannot resist) with three of the best little neck clams I've ever enjoyed--how wonderful when clams as a component of a composed dish can be cooked precisely and not be chewy afterthoughts. Sorry this photo does not do the dish justice, partially because it's poorly lit, partially because it's hard to see the slight bed of cavolo nero that added green, and partially because you can't smell the photo. The sauce is billed as a lemon parsley jus, but that doesn't do it jus-tice, for there's just enough of tomato in it to make it richer but not a tomato sauce. I wanted a bottle of it to take home. 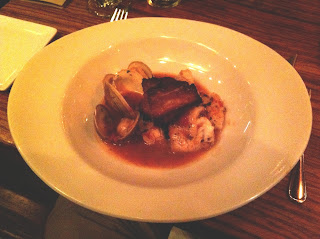 And yes, since it was my birthday, I had to have some dessert, as everyone knows the calories you consume on your birthday don't count. Again, a short list, but everything sounded delish, and not just because I was enjoying an Allagash Curieux Bourbon Barrel Aged Triple at this point (dessert in a glass, sure). We went for something already off the menu, so I'm glad we ate when we did. Generally I eschew the chocolate offerings as they tend, even when good, to be good for three-and-a-half bites, then seem too much of a good thing. Here the chocolate mousse, though, seemed irresistible, with sea salt and a caramelly whipped cream and then a sprinkling of what Cracker Jack would be at the world's best ballpark. You know me--a lover of that sweet-salt mix, and this totally knocked that out of the park. 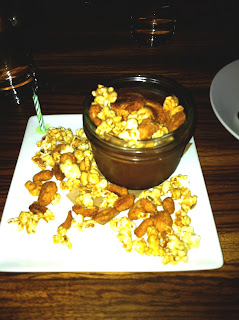 *Truly a wonderful hotel, and not just for the location. And on top of that--literally on top--is Spa Vitale, where you can start your treatments (just what the doctor ordered) with a wonderful bath that will make you feel wonderfully weightless.

†The Ferry Building and its wonders will get its own entry soon, promise.
Posted by George at 8:01 AM