If Chef Means Boss, What Does That Make Springsteen?

Generally I feel pretty removed from popular culture. For instance, after being coerced into watching the full video for Lady Gaga's "Born This Way," was I outraged she lifted so much from Madonna's "Express Yourself"? Of course not. I was pissed off she lifted Bernard Herrmann's title theme from Vertigo.

So, what does this have to do with food, you might ask? It's that I find Top Chef sort of irresistible. Sure, it's all ginned up with twist silliness one hopes most chefs don't have to deal with, from cooking with one hand to stripping down, diving in, and catching your own conch (although you'd think Ludo Lefebvre would have been a natural for that on Top Chef Masters). Yes, over the course of its eight seasons it's mirrored the real world problems with high-end kitchens and rewarded more white men then women or people of color as top chef. Yes, you completely know it's edited in a way to leave you guessing till the end what's going to happen, even if what's going to happen is pretty clear, really. Heck, they even toss in red herrings (not actual fish--that would be more amusing, to at one point pummel the contestants with yet-flapping red snapper or something), for I'm sure I wasn't alone assuming Wednesday night when they focused on Jamie sous-chefing the jalapenos and asking about seeds, something would end up too fiery for some judge, but not a pepperoni-sauce-loving Gail. (Poor Gail--I swear there's an unwritten rule that she must get edited to look a bit dufusily goofy every episode to make Padma look even better, sort of like Vivian Vance and Lucille Ball back in the day...but then again, once you consider how they dress Padma, that idea sort of goes out the window--never has a beautiful woman worn more ugly unflattering outfits on one show that wasn't a comedy.) 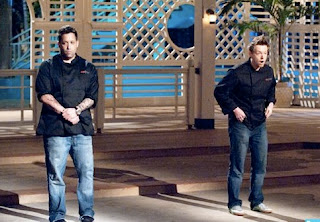 The good news is [spoiler alert!] that Richard Blais can finally rest becalmed at the top of self doubt mountain--victory is his. And it wasn't easy, as Mike Isabella matched him dish for dish (almost--Blais sneakily worked in an amuse bouche, too, that people loved and you have to assume that brown-nosey extra mile can't hurt in a world as regimented and suck-upy as the kitchen). And, as is so often when things get close on TC, dessert almost turned out to be Blais' downfall as he took a great risk and (no surprise) nitrogened up some ice cream. The surprise--he made it flavored with foie gras. Makes sense, richness into richness on some level, especially at a restaurant he named Tongue & Cheek (a clever play on the usual phrase, plus a tip of the cap to something offal, even if his menu was actually hoof-n-snout light beyond some sweetbreads and marrow). Alas, the first servings of it were too freeze-dried up, and if you ask me he won the evening by correcting the mistake before the second round of judges hit the restaurant. What better sign of how good a cook you are than to be able to make improvements on the fly?

And, as far as temperaments go, I'm always going to side with the self-doubter rather than the brazen Jersey boy, despite being a Jersey boy myself. So sorry, Mike, but pack your pride and go.
Posted by George at 8:01 AM