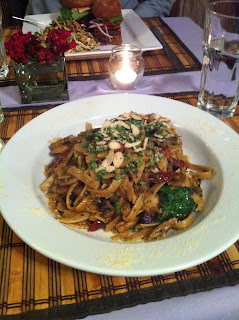 I make it a practice not to mock chickens as I go to San Diego sometimes and there's a really big one down there. OK, seriously, there is mock chicken, except at Mary's Secret Garden it's called "chycken," and I think I know why. For Mary's is all vegan, and often raw, even, so the chycken is either some vegetable protein made yummy or the work of seitan, but when it appears in Mary's sun-dried tomato mushroom pasta--as homey and lovely a heaping plate as you could dream for--it almost seems like another type of mushroom, with that good sort of rubbery chewiness you might get from a hearty portobello, say. It, and the large variety of mushrooms full of their earthiness, also do a fine job carrying the light white wine and basil pesto sauce, so every bite is rich and rewarding. And that doesn't even get me to the whole wheat linguine, which is lighter than you might expect and certainly doesn't have that air of "it's good for you"-ness that often seems to pervade vegetarian restaurants' pasta dishes. One of Mary's greatest secrets is it actually want to serve you food that pleases. Thanks, Mary. (Note there are greens in there, too, for more variety of texture and taste, and nuts, and a sprinkling of parmesan cheeze, guaranteed to displease your spellcheck but still make you a happy eater.)

So after several visits to Mary's Secret Garden in Ventura, I am not yet a vegetarian, even with the deluxe raw tostada, the Syrian hummus plate, the secret burger (of soy meat), and the tofu pad thai. Enjoying their housemade kombucha isn't even enough of an elixir to turn me. As long as there's a match and a pig left on the planet, I will hanker for bacon.

But Mary's is the place I want to be if the last oinker ever hoofs it off to that great sty in the sky.