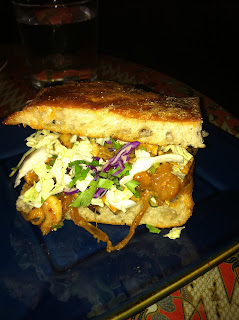 I guess I have to admit I'm sad to say that I'm not sad to say that I've come to the point in my life when hanging out in a rowdy bar drinking to the wee hours doesn't hold much appeal. I did my bar-boozled time, and probably some of yours, too, back in my younger days, but now it generally seems best if there's drinking to be done to do it at home as a series of delicious decisions built around an equally delicious meal--cocktail pre, wine with, after after. Then the good night is easy, as I just have to walk to the bedroom.

This prelude is a long way to say--I was on State Street at midnight this weekend, amidst those much younger, much more blinged out, and much drunker, and was overjoyed to be there. And there was no drinking of anything stronger than water involved on my part, for I was at Blue Owl at Zen Yai, Cindy Black's weekend late night concern that should concern anyone interested in scrumptious versions of southeast Asian streetfood in our humble, not very hip to the ways of the rest of the big world's food obsessions, burg. I wrote about Black when she opened back in October, and the good news is the food is just as fine.

OK, better than fine. In our house, we dream of her red curry shrimp roll, ordering each other around, saying, "Bring me a Cindy Black sammich!" But then we hardly ever go, as the thought of getting food at--or pretty much even staying up till--11:30 pm is too daunting. This weekend a friend who hadn't been told us he'd meet us there on Saturday, so we sort of had to, and that appointment helped it happen. Do note things are casual at the Blue Owl; we got there a few minutes early and were a tad distressed there was no sign of life inside Zen Yai. But sure enough, at 11:32 or so Cindy herself showed up at the door, and soon Blue Owl spread its wings to the drunken world, and us. (Indeed, at one point one large maybe just out of Velvet Jones group milled about outside and one dude almost came through the window, but I guess the plus is--free floor show!) Oh, and that is good news, that you can actually sit down inside and not just order to-go; turns out it was too cold for Black to be sending everyone away to eat on benches. See, winter does to happen in Santa Barbara.

As for that red curry shrimp roll, I doubt I can fully capture its magic in words. The shrimp themselves actually taste like shrimp, which is important--they don't get lost amidst the rest, or even in the toasted ciabatta, which is big but doesn't dominate the way a crusty bread can for such a sandwich. The curry has heat but flavor, too--it really rings royally true to its Thai-ness. Then there's plenty of cabbagy crunch, green onion zip, and cilantro pep. Finally there's the tofu, rectangles wisely the same size as the shrimp, so each operate as equals, but the tofu must be baked or something first as it's crispy almost and fully flavored. You could eat the sandwich made solely of tofu and be content.

The rice is nice, too, again an attention to detail making it all so much better--why she bills it "gourmet drunk food." Nothing like a truly fried egg, all sizzled at its edges, but still able to ooze yolk over the rice, adding even more richness to the dish.

And in case you're wondering, if you get a second shrimp sandwich to go, they hold up really well for a next day lunch, right about when you start getting sad it's been a few hours since you'd had one. Ok, you'll want to eat lunch early.... 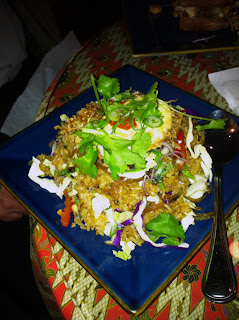