Welcome to a day off from the poetry tour, so we move digs, rent a boat, eat an incredible meal, and see a badger on the road (alas, no photos), for it seems that all the fairy tale animals of your dreams live in Ireland.

Early in the trip planning we saw this would be a free day and were considering a drive up north to see things like the Giant's Causeway and the Old Bushmills Distillery, etc. But then David suggested, "It's an area known for its lakes--let's rent a boat!" So all six of us decided to do that, and we needed a third night that our Air BnB could not offer us.

So instead we landed on a place in Blacklion, only about a 20 minute drive from Enniskillen, back into the Republic of Ireland. It's pretty amazing given the history of The Troubles that the border is so porous--you drive across, there's sort of some signs, but the biggest difference is the speed limit, which is in kmh in the Republic, mph in the UK. Note, this change isn't very clearly marked, so when dumb people in rental cars start driving too slowly in Northern Ireland, don't blame us, I mean, them.

Our new place is a whole duplex house in a subdivision that maybe got the green light in the Celtic Tiger era but didn't get finished by 2008--one place nearby had clearly been for sale for some time, its backyard choked with weeds tall as I am. All the commercial storefronts leading into the subdivision are empty, or worse, abandoned with remnant of what they were. Our place was very nice, though, clearly a place no one had ever lived in and only rented out, and way too big for us with four bedrooms. But laundry! Such a luxury.

From the second floor the view caught a bit of a lake, lots of green--you're actually staring back into the UK from the Republic--and cows that in the early morning gamboled about. Seriously. One of the calves pranced about and head-butted his mom. We didn't pay extra for Bopping Bovine Theatre. 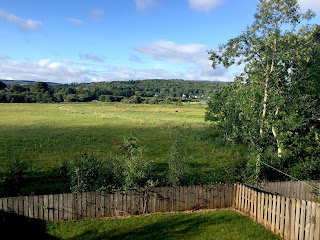 We brought groceries and lunched on the boat. We thought we'd be picnicking on Devenish (it's coming, promise, in Toured), but the bit of the rise of an island in the lot of a lough meant much more bitter wind than we expected. Not conducive to al fresco dining in the least.

But really most of this day's recap is going to be about dinner, because 28 Darling St. I'd put up against most places in LA, even. The chef Glen Wheeler, while still in his early 30s (I'm guessing), has a resume anyone might envy--he was head chef at MacNean House and Restaurant (which just happens to be in Blacklion where we are Air BnBing), long acclaimed as one of Ireland's best spots, working under Neven Maguire. But if fancy Irish cred isn't enough for you, Wheeler has also done apprentice stints at Alinea and Noma, and that he has the drive, and ability, to do so should make it clear he's a star on the rise. The front of house is held down by his wife, Zara McHugh, and service also was that perfect combo of friendly with just enough formal to make you feel special. It's a gorgeous room, almost too much of a room, with a chandelier blingy enough to belong at Liberace's house. But the black and gold flocked wallpaper and that light and the mirrors made it one of those bathed in golden glow spots--it's nice when a place lifts you into its glamor.

But the real star is the food, things like this exquisitely plated beetroot salad with ethereally whipped goat cheese. 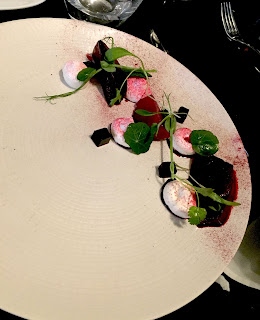 Or this simple, simply terrific pea and mint soup with lovage, every one of those flavors bright as a spring day of your dreams. 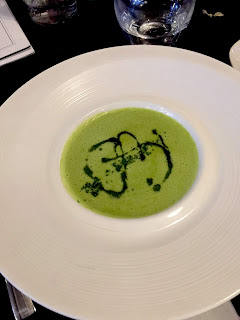 Then how about this palate cleanser course, playing to one of my sweet spots--a granita of gin (my guess is Hendrick's given flavor #2), cucumber, and elderflower. I don't think a palate cleanser left me a bit buzzed before, but in the best of icy ways. 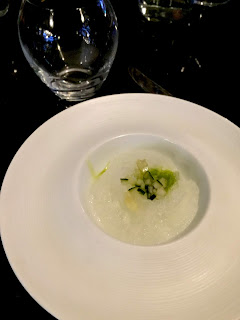 Chryss ordered off the vegetarian menu to get this, gnocchi that walked that tricky line of being hearty enough to actually have flavor but light enough they weren't pasty in the least. 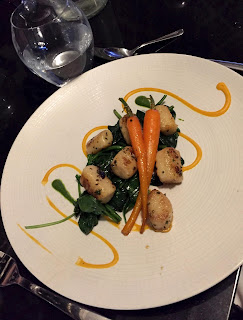 I opted for lamb, simply hoping to limit the possible number of roadside sheep we could crash the Volvo into. I'm always thinking, I am. OK, I do like lamb, although I order it (medium) rarely as it can often be tough or even a bit dull, like it's meant to be the meat dish for those who don't have the strength of their beefy convictions. Not an issue here, either way--tender, full of that almost gamey quality good lamb has (they get scenic turf to trod and chomp, after all), and then the wild garlic set it off with a friendly funk plain old garlic doesn't have. Plus cos, which is a much cooler name than romaine (cos, rocket--they've got all the greatest greens nomenclature), grilled just enough to find a different cooked key that is brightness and not mush. 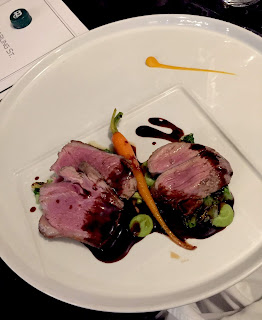 And then, we're not always dessert folks, but this was even more delicious than it was art, and it was that plenty. Those are shards of harder meringue, with little toasted puffs of softer meringue, vivid as Technicolor lemon curd, same with the strawberry essence, and then actual berries, no doubt macerated as they were double-plus good. One of those plates you want to lick to finish. 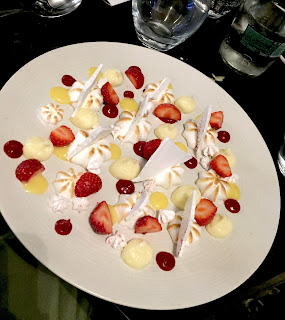 And as good as the food was, even better was the company. For we were treated to this feast by Teresa Godfrey, the poet we first met up in Letterkenny who actually lives in Enniskillen and came to the PLs reading there, too, and Monica Monaghan, cardiologist, and friend to poets. They were clearly regulars (lucky them!) at 28 Darling St., even getting the chef to come out at service's end to chat a bit with us. But as with most memorable meals, the food gets even more elevated when the company is witty, wise, discerning, and charming new fabulous friends.

There was a gin menu at 28 Darling St., as you might surmise from that palate cleanser course. As is the international rage, everyone does gin and tonics, but I still prefer my gin a-swim with the briefest bikini of vermouth, and given they had Monkey 47, the less it shared a glass with the better. Lovely, bracing, herbal martini to kick the dinner off with. Then I had a glass of wine, I don't remember what. Go back and look at the food pictures. Guess why I forgot the wine.

As for boat-cruising beer, we were in Northern Ireland, so what better than some of the UK's best, Brewdog Punk IPA? Plus, we like punks. (You know, Johnny Rotten is Irish.)

The boat trip around Lough Erne was lots of slow-knot fun. We joked they made sure the top speed of the boat was barely forward as that's the only way they could send them off with people they didn't test for their ship-shapeness, but it probably was the sad truth too. That did give us plenty of time to take in all the sites, though. 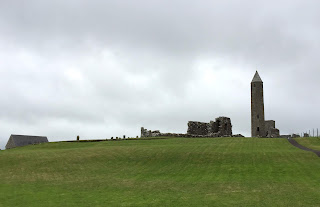 Tops on that list was Devenish Island, where St. Molaise III (or if you prefer Saint Laisrén mac Nad Froích--say that one time sloooowww), founded a monastery in the 6th century. Sad to say, what's standing on the island now at its earliest is from the 12th century--how au courant. But if you want to sense even how long human time is, there are worse places than Devenish. 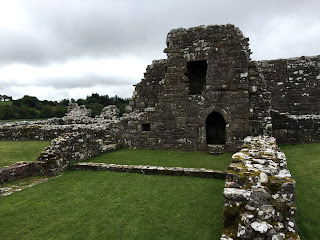 Good walls make good history. Now, don't be cross with me about that one. 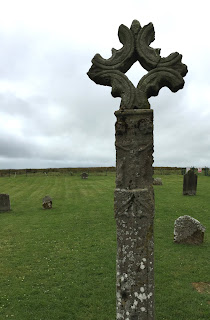 I mean, I can sense your stony face. 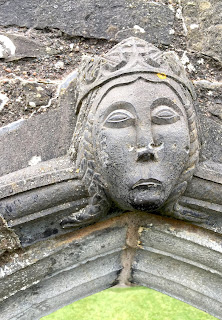 OK, enough of that. You do get to go into the 82 foot, 900 year old tower, but only one floor of it. If danger came, you knew it from here, and then you'd pull up all the valuables inside and station John Cleese on a parapet to toss insults. (I get my history knowledge from strange places, sorry.) Here's the view back out the tower door toward the dock and the boats, which look very small. Ours did fit 6 of us, though. 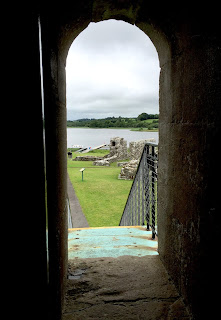 And just to prove why we didn't picnic on the island, here's us being freezing in July in Ireland. But then again, ten centuries blew their cold histories upon us. 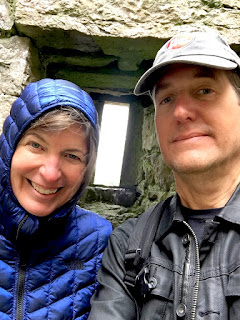 After sailing the Lower Lough Erne, which is actually to the north of Upper Lough Erne, as its about how the water flows, not compass direction, we took the River Erne past the town itself, where you get the best view of Enniskillen Castle. (Guess what? We never went inside it.) 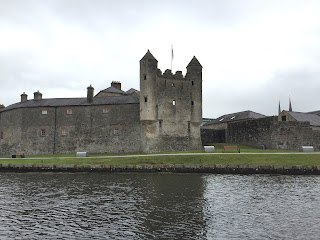 We also sailed far enough south to see the Air BnB we stayed at the first two nights in the area. So here's that ruined railway bridge, up close and stony. 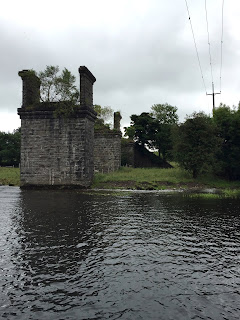 And there was a badger in the road that night, I promise. He looked as startled to see us as we were to see him, as he briefly paused as if deciding whether our bumper was tasty. Instead he just made his unhurried way to the other side of the A4, a two-lane highway only a Meles meles could love.

Go ahead to the post on Day 6 (Bellaghy, Cookstown).