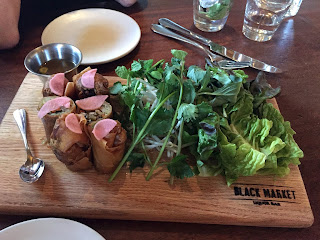 And we take a break from our irregularly scheduled Irish programming to bring you crispy spring rolls you really need to have from a spot much closer, Studio City. For before the amazing, he's a national, if still quite edgy treasure Randy Newman show at the Hollywood Bowl last night, we finally got to Black Market Liquor Bar, under the watchful eye of executive chef Antonia Lofaso (you might remember her from two Top Chef seasons). It's just down Ventura Boulevard from Barrel & Ashes (which somehow I have never written about, sorry), which makes this an enviable neighborhood for eats.

Those are some of the better spring rolls I've ever had, so it was no surprise to see servers bringing them out to pretty much every table in the wonderful room with a brick-barreled ceiling and fans run by old-school pulleys. Cool in so many ways. As for the spring rolls, they were crispy indeed, without any oily ooze, and stuffed with flavor, shiitake as umami stars. Your server suggests you wrap the roll in lettuce and add Thai basil, mint, and cilantro, so you get all that fresh herb kick (should be even more of those, actually, and fewer of the bean sprouts, but that might just be my particular palate talking). Here's hoping you're with a loved one sharing these, as that meager spoon isn't going to do; you're going to want to dip, and sloppy seconds and more, your roll in the yummy nuoc mam sauce, ripe with fish sauce and vinegar and lime. 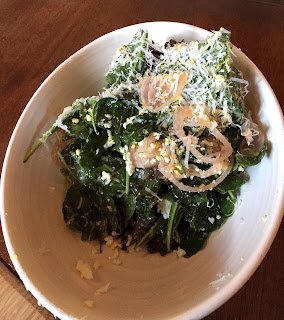 Next we did the kale salad because California. It comes with pickled shallot, pecorino romano, bottarga, crushed egg, and the last three sort of do an unusual, no mayo gribiche thing, so picking them apart is tricky. But it's all direct, simple, and delish, so you won't mind, unless you need to feel you're paying for salted, cured fish roe. 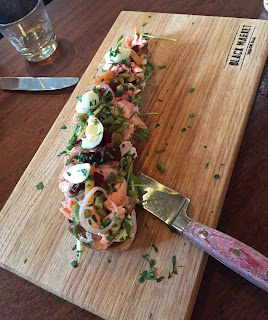 You might have figured this is mostly a shared plates place, because you're smart and that's what we did. So here's perhaps the star of the evening (which means something): smoked ocean trout, ciabatta, pickled baby veg, quail egg. Think of it as an open faced, less Provencal Nicoise, with smoked trout standing in for tuna and you're sort of on the right track. While beautifully composed, it also was deliciously mixed together, so, for instance, you got a bit of pickled baby green bean with some of that superb smoked fish, and eggs the right size to match. 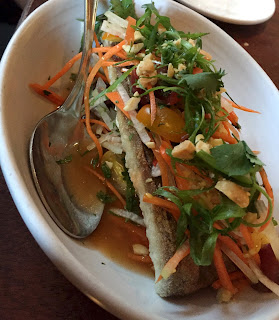 And then there's the crispy mackerel, that's truly crispy even in a bunch of sauce, redolent of coconut, cilantro, ginger, green papaya, peanut, chili, and lime. Now, there might be too much accoutrement, and not enough fish (particularly at $24), but my god was that unctuously oily fish scrumptious. And it's not like the last seven ingredients can really go wrong, especially as the dish also is braced by enough vinegar to keep a spiky sour spine through every bite.

And I didn't even mention the pleasing cocktails. We would go back, but while it's closer than Ireland, it's still a bit of a drive.