For a quick summary of what's up this day, we motored from Dublin to Letterkenny, Donegal, a three-and-a-half or so hour drive that takes you in and out of the UK on the way (and the borders are unarmed, mostly unmarked--think of their history, and no walls). And, it's time for the first of the seven readings! 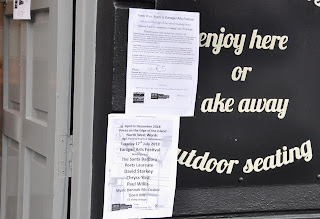 This day's event was hosted by North West Words, a wonderful organizations of poets and writers that hosted the PLs with a grant even, as part of their 2018 Arts Council funded series. They have great posters to stand next to. 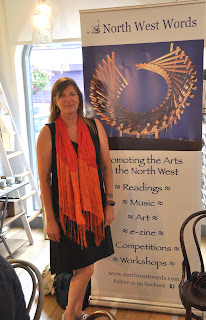 Organizer Deirdre McClay was a gracious host, even getting us a place to stay. The program was emceed by the drily witty Eamonn Bonner, who gave away poetry books and wine for trivia questions, such as, "What's the distance between Santa Barbara and Letterkenny?" (5,069 miles, if you were wondering.) 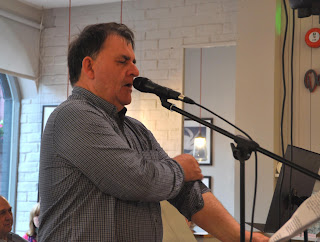 David, Paul and Chryss decided to do a round-robin style reading, where their goal was to come up with a poem that somehow connected to the previous poet's work. Soon we learned such segues might be a tad tenuous--"my poem, too, it turns out, has words" kind of thing--but that only added to the fun. And the three PLs exhibited their very different approaches and styles; David the sharp-eyed cynic; Paul offering odes to nature; Chryss displaying a mastery of form and feminism. 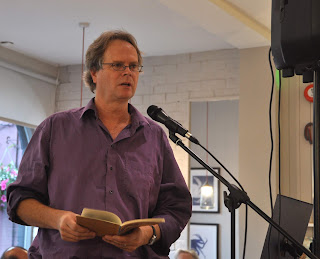 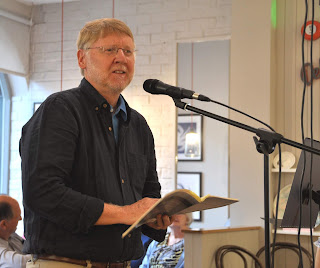 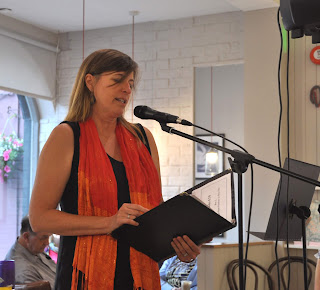 The full artistic program of the evening also featured local singer Hannah McCosker, who not only wins busking contests, but just happens to be studying medicine in her non-musical time. Eamonn joked for our group he asked her to play older songs--a highlight was her slow-burn gender turn on Bruce's "I'm on Fire." 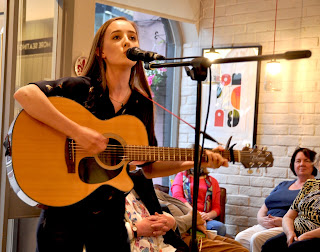 A particularly fun part of this evening is that North West Words asked the SB PLs to send a poem each that Irish poets could then write response poems too. It was fascinating to see the Santa Barbaran works seed others' thoughts. Even better it got all of us introduced to Teresa Godfrey, a very talented writer who will be back in this story when it gets to Enniskillen, where she lives. 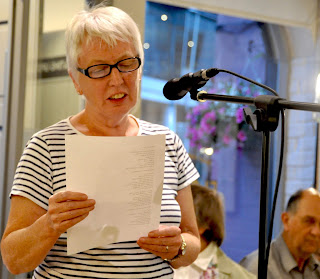 I'd be remiss if I didn't mention the great site for this event, Florence Food Co.,  a just hip enough coffee shop with plenty of space for an event like this one but even more the heart to hold it. Plus, check out the photos on this wall and think about its name. 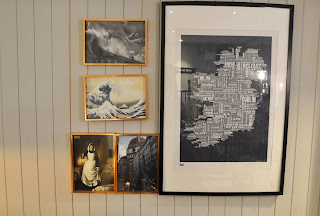 One of our three nights in hotels on the trip, all paid for. (That's correct, people paid for poets to stay someplace. Civilized countries.) Dillons was a fine place to spend a night, a couple of blocks down Letterkenny's main street from the reading, and a few the other way to our dinner pre-reading...in the next section, eventually.

Since we need to start with breakfast in Dublin. We were so impressed with the Winding Stair the first night that we returned to its sister restaurant Woollen Mills for breakfast. To be honest we spied it out the evening before, mostly hoping to poach WiFi, but then we got instantly intrigued by the food on display. 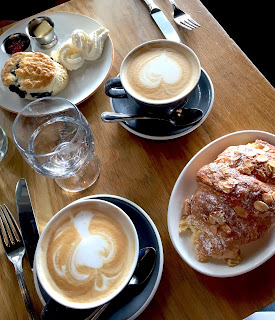 Supposedly James Joyce worked in the building back in the day when it was its name and not a restaurant with its name (kind of the US equivalent of naming the new housing tract Christmas Tree Farms....), so there's that. More importantly for today, well, just look at that photo. Killer coffee, lovely baked goods. Scone better than croissant, but hey, what country are we in after all? What was I thinking?

Lunch proved there's plenty of meh in Ireland if you don't bother to look for it and just stop into a town and try a luncheonette. About half way between Dublin and Letterkenny is Monaghan, a cute town if sort of undistinguished (especially in a one hour visit), so we picked Caroline's there and have a perfectly serviceable lunch. Here's fish and chips and mushy peas, if you please. 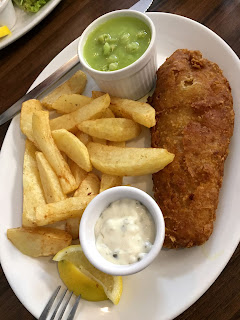 Dinner, though, more than made up for the ok lunch. The Lemon Tree Restaurant is in an odd spot in Letterkenny, down off the main street backed up to a mall that seems to only contain shops that are going out of business, like it was designed to be a mall for the lost. And then this place. Larger and a tad fancier than you'd expect given the town and even more so they actual location by the mall of the dead, but not stuffy at all, either. And, like many places in Ireland, they do an early evening menu that turns out to be a "you will eat more than you should" bargain--first course and main for 20 Euros.

All six of us were eating together, and we feasted. 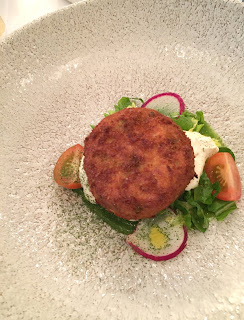 That's a fish cake, definitely mostly seafood and little filler,with some piquant tartar sauce and just enough of a salad to add a bit of crunch. Even more adventurous was their beetroot (it seems crucial in Ireland to call it by its full name so no one things you're just serving the greens) salad, complete with a beetroot ice cream in the center, delicious, unusual creaminess to set off the earthiness of the rest of the plate. 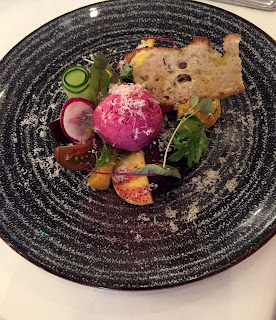 For a main I couldn't resist the nationalist call-to-arms that is Irish steak burger, matured Irish cheddar, Irish bacon, brioche bun, and chunky chips. I'm not sure why they didn't insist the chips were from Irish potatoes, beyond, I guess, that's just given. Oh, and that tomato compote, so much more than a ketchup (sorry, Paul!). 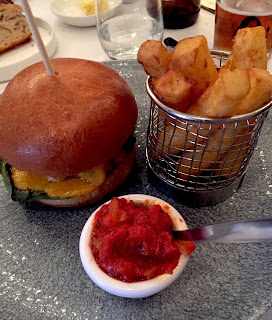 It truly was the kind of burger that hits every "that's what a burger should be" sensor--very flavorful beef cooked to the right medium rare temp, cheese that had a bit of bite, bacon that you really had to bite. Chryss, shaming meat-eating me, went with the veggie dish, which was no less lush, though, mushroom arancini, parmesan, mushrooms,toasted almonds, buttered broccoli. 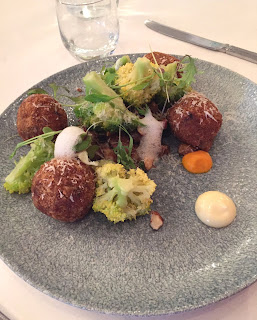 Not a big drinking day, to be honest, and one of the lessons learned back at the bar at Dillons after the reading for a nightcap was even good breweries, when they start trying to expand the brand, can end up making Ireland's Blue Moon. (I'm looking at you Guinness's Hop House 13 Lager.) Another fascinating lesson was you can consume liquor cheaper than ale; a Guinness cost 4.70€ when a Powers on the rocks cost a mere 4.40. Drink hard, my friend.

Or drink one of my favorite beers on the trip, and not just for the goofy art or the grungy name--Hairy Bollocks (please, trust me, don't Google this name brand, especially at work). Sure, I might enjoy this American style pale ale as its features Cascade hops, but it's just darn tasty, and all at a mere 5%. And I dare you not to giggle when you learn the following from their website: "Boghopper Brewery is an independently owned micro-brewery situated in the town of Muff, on the Inishowen peninsula’s Wild Atlantic Way." 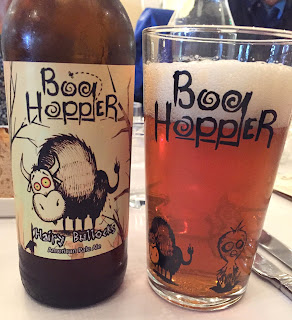 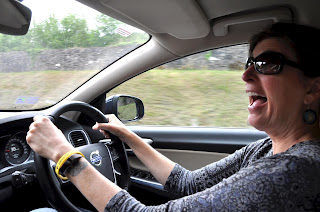 For the most part driving wasn't too bad (I'll save the scariest for later). The highways are very well taken care of, the only bad thing is suddenly a divided comfy roadway can become one lane each way and still be a major-ish road. Plus they like to paint the lines dividing such a road with white paint, which here in the States usually means that's all in one direction. That's a bad thought to have in Ireland. And then there were some odder things, like trying to figure out what this sign meant: 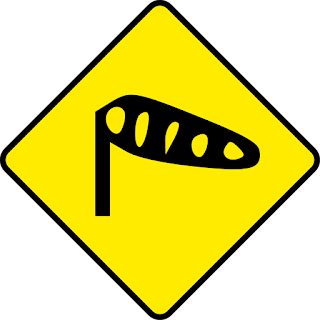 Wear a coonskin cap? Beware caterpillars on the road? Eventually, thanks to nature doing what the sign meant to warn us of, we figured out it was the sign for gusty winds. It wasn't a breeze to figure that out.

Speaking of the weather, as I said, it's such a scarily literate country, and that covers their weather forecasts, too. I'm not sure any of my poems reach the gorgeous heights of this posting in the Dillons elevator. Ah, ambiguity passes like a sudden cloud. 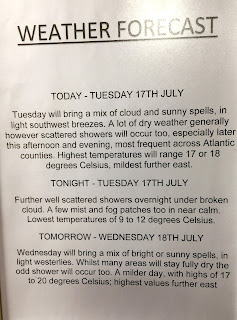