Welcome to a day where we saw a lot, including our rental car's "check tire pressure light," which we finally figured out you could just reset on the car computer. But given trying to figure out how many miles/kilometers you'd driven on the same dash was so hard it took two guys at the rental agency to figure it out when we showed back up in Dublin with our Volvo S60, we didn't end up feeling too badly about being slow. (Not that that later knowledge helped us when we had views like this from the car while our dashboard blink dire dread.) 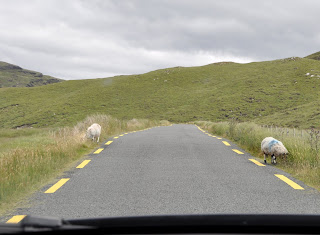 Late in the day, but amazing, the top, very garret-y floor of a house right on the River Erne between the Upper and Lower Lough Erne. But, with all that, really a mere 5 minute drive into downtown Enniskillen. Everything you want an Air BnB to be--seemed just renovated or built, too, so very clean and fresh. And then this view. 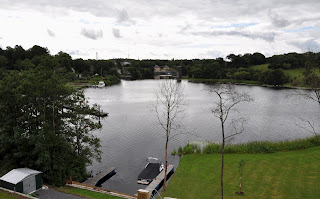 Happily, we would be here two nights, almost a luxury on this trip. 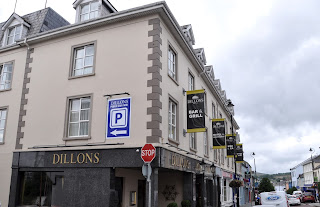 We started off with the buffet breakfast included at the Dillons Hotel, full of Irish breakfasty things like sausage and rashers and potatoes and grilled half tomatoes (they were at every breakfast, some better grill-melted than others, and we grew to love them).

Lunch was leisurely, mostly as the one server in the very uncrowded Arnolds Hotel Restaurant in Dunfanaghy (see Toured below) disappeared a bunch, perhaps in search of the missing apostrophe in the establishment's name. Still, it was a lovely respite with a view of a gorgeous garden, which happens in summer in a place that has this unusual thing called rain. (Perhaps that's an Irish word.) We didn't take photos of the food, I'm not sure why, but I had a ploughman's lunch, as I had to as I'd been in the country for three days, hadn't had one yet, so risked deportation. The key to this cheese sandwich is not really the cheese but the relish, and theirs was very good, both sweet and pickly at once. Chryss had an open-faced salmon sandwich that went down swimmingly.

Dinner came at too much car time/cranky time, so we were happy to end up in The Horseshoe and Saddlers, the upstairs more bistro-y, less pub-y part that had a very proud display of its desserts including mighty, the size-of-your-head meringues, we did not partake of. Instead we chowed down on some pretty straight-ahead and pleasing food, because that's the kind of place it seemed to be--steak and seafood, horseshoes and saddles. I went for the sizzling T-bone with tobacco onions that came to the table like fajitas. Very tasty, especially because you could order Bearnaise, and to their credit, they didn't nickel and dime you or whatever you do in Pounds and make you pay for the sauce extra (I hate that). Plus, who doesn't love an unhealthy mound of skinny fried onions? 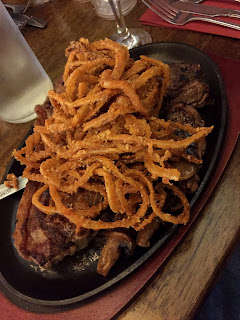 Chryss had the Cajun spiced salmon fillet over a bed of sweet chilli noodles and stir-fry veg, a bit of a cultural mish-mash, but tasty, as many different cultures know how to cook and the English (remember, this is the UK now) know how to steal from other cultures with the best of the Imperialists. 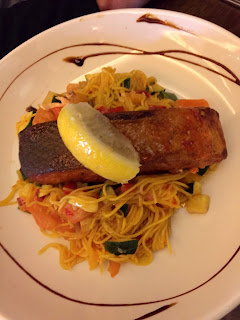 The manager (owner? I really don't know) was quite chatty and friendly, complete with his visit to CA story to tell us. (People like telling you about coming to our state. I get it.) Certainly a bargain meal, if nothing else, as that 14 ounce steak was just $26 and the salmon, a whole dish, please note, and not a naked entree asking you to get vegetables at $10 a pop, cost $19 (I did the conversions for you).

At lunch it looked like they had Kinnegar Scraggy Bay on tap, but unfortunately their draughts were on the fritz, so I had one in the bottle. Still, quite good, low enough in alcohol for day drinking, yet in a 500 ml bottle, so you can order one and feel you've had enough. The Irish really do having drinking down.

As for dinner at the Saddlers Bistro & Wine Bar, well, you see what's there at the end of that name, yes? Somehow it had a wine menu that made no sense to me. There was clearly wine by the glass, but none of those were marked (I ended up with 1 LRG GL RED for 4.70£). Not that I'm mister somm savvy, but when I can't tell if the pricing is by the glass or the bottle (or some carafe system not introduced to me?), it perturbs me. Especially when one of the listings is simply Chateauneuf du Pape, no vintage, no producer, and it's ridiculously affordable. Oh well.

Our favorite drinking experience of the night was checking out the off-license sales from The Horseshoe downstairs after dinner. Having never done it before, I asked the friendly barkeep what to do, and he said follow me. We all went into a 8 x 8 foot room off the bar. On one wall was a cooler with a depressing selection of beer. But behind our barkeep was Irish whiskey, so that clearly was the correct call, especially when a  375ml bottle of Powers sold for a mere $15. We nightcap nipped from that for the rest of the trip.

Oh, and the best part of the off-license was discovering that our couldn't be more than 25 years old barkeep wanted to move to the U.S., but to northern Texas or Oklahoma. Our quizzical looks about that location led him to explain--he wanted to become a tornado hunter, even knew a friend who died as one, so he felt he had the other guy's unfinished business to do. We got a lot for that $15 bottle of booze.

While still in Letterkenny, we decided to explore a bit, given there was a church like this one, on a hill, as that's what the religious do to lord over you, after all. 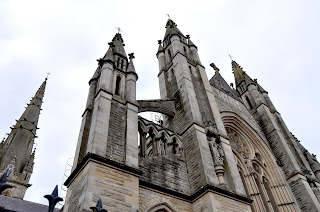 I'm just happy to see that first, it's named for two saints, as if just one won't do, and second, it might be named for two because St. Eunan and St. Columba, well, is there such a thing as D-list saints? (And here we pause to hear my mom turning over in her very Catholic grave. Sorry, Mom.) We do love us some old graveyards, though. 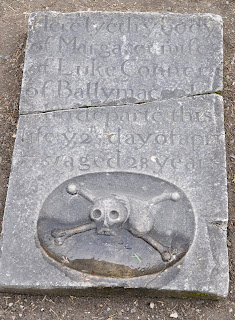 And a view, who doesn't like those? (That was the typical Irish sky, by the way; perhaps a threat, but more likely just posing for dramatic effect.) 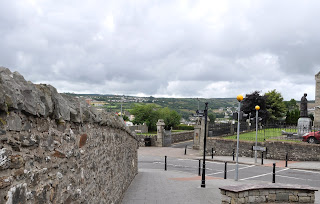 Then we decided to test our ability to drive on roads that look like bike lanes, heading as north as we could go with an ultimate goal--to loop Horn Head on the Wild Atlantic Way (rejected slogan: if the sea spray doesn't dampen you, you might just wet yourself). That's how we ended up at lunch in Dunfanaghy (see above), where a group of horses, some clearly island ponies (that's what more horse knowledgeable Chryss called them, don't ask me), strolled in across the shallow bay like some mirage. 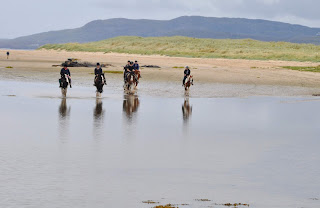 As a place where sky, land, and sea meet at odd angles, Horn Head is high on the sublime list, indeed, making one wish one had purer poetic thoughts to even scratch the capture surface of something so stunning. Here's a photo of it, not doing it enough justice, and then some people in the way of the view, as it's the 21st century and that's what humans do now. 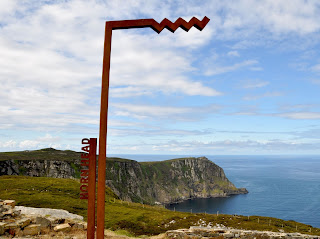 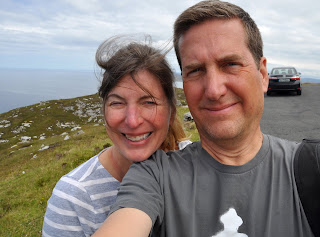 I've never been more north; that's something. (And yes, I'm wearing a t-shirt from Australia, when I'd been most south, for what that's worth.)

And as spectacular as that was, the view back down from the Head across the bay to Dunfanaghy, if you like how people add to the landscape, well, not bad. 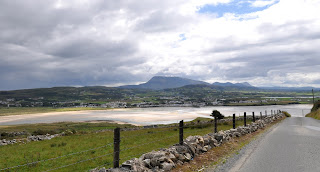 So we drove, headed for Glenveagh National Park to hike about Lough Veagh. 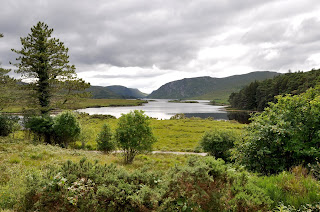 We fell in love with it lough, stock, and castle, especially as it had a dog. (Our dogs never bring us flowers, but then again, they're not made of stone. That would make them a tad bit quieter, I'd imagine.) 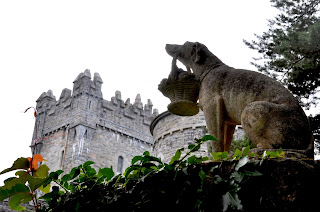 OK, the real story of the castle is a downer. While it's been part of a national park and open to the public since 1986, its original builder/owner John Adair kicked with police help over 240 tenants off their land that he wanted to be his. Somehow he wasn't much liked. He died in 1885, only 12 years after the castle was finished (justice? health care Republicans hope we can have in the US soon? you decide), but his wife kept beautifying the place, especially with all the pesky peasants out of the way. So, yes, verdant gardens. 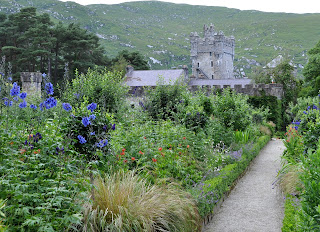 You can hike a lot around the castle, which we didn't go in. But from the right vantage point, you can seem so much greater than a mere mansion on steroids. 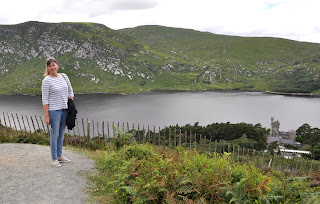