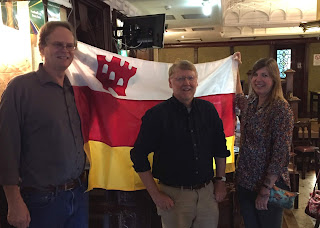 That's David, Paul, and Chryss and the Santa Barbara city flag, at Blakes of the Hollow Pub in Enniskillen.Yep, it's really named after William Blake, but nope, not that one--
Catherine Blake, grandmother of the current owner, named it for her son William when she bought the spot, already open for 50 years, in 1929.History, I tells you.

Here they met with and read with the Fermanagh Writers Group, doing their round robin thing for a bit, then letting the group do a round robin or two, too. So we got to hear quite a range, from finely crafted light verse to much heavier political prose poems and all sort of things in-between. One of their readers managed to work in a different instrument (flute, fiddle) each time he took his turn. Not surprisingly, a pub helps blur that line between music and poetry a bit. Our agenda put it plainly, but this phrase actually means quite much: "compensation: fellowship with Irish poets." Indeed. 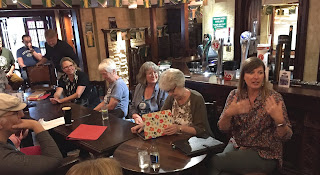 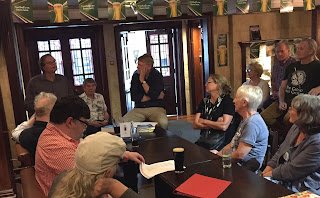 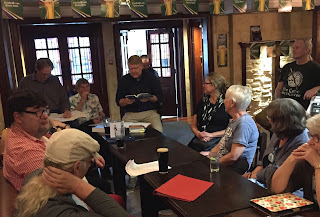 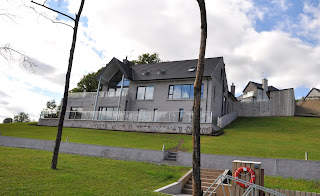 Here's a different view of the place we got to stay for two nights (such a luxury on this whirlwind adventure), as you would see it from the dock on the River Erne. Those little gable windows were ours.

Having an actual place to stay with a kitchen meant we packed in some groceries and simply had great bread and even better butter for breakfast, as we knew this day, like most, would more than likely become a rolling feast.

So for lunch we ate at the Stables Tearoom at Florence Court (see Toured). I also offer up Stables Tearoom as a particularly UK kind of oxymoron. For what's basically a cafeteria in a historic site, the food was pretty tasty, as perhaps the photos suggest here, balsamic drizzle abounds across our two very different salads, but there's good ingredients at the dishes' roots, which there better be as you can buy produce from the estate's garden at the gift shop. As the spot was home to generations of Earls of Enniskillen, we had to eat cake, too. 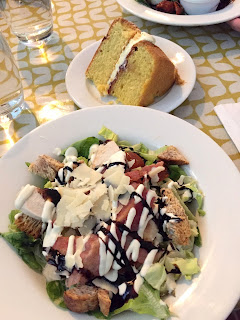 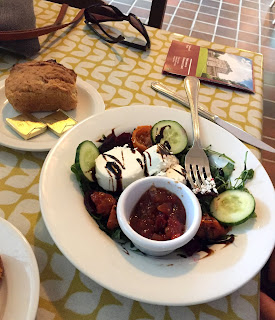 Dinner was at Cafe Merlot, the restaurant tucked under Blakes of the Hollow, as we figured we couldn't get lost on the way to the reading then. (Plus, it seems easy for Irish dinners to stretch, so the less time it took to get from dinner to reading the better, we learned.) It's a quite opulent space, arched brick ceilings, marble floors--not exactly what you'd expect to come across at pub-bottom.

And then the food started with plating like this, that evening's antipasti platter, as they billed it. What you see top to bottom is a perfect little prawn, a mushroom tarragon bisque you instantly wanted as your whole meal, and a delightful smoked salmon. 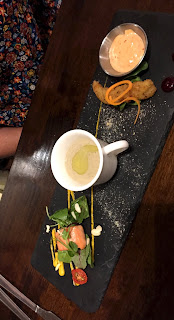 I ordered what was not just a special but truly special, a duck confit salad with rocket (such a better name than arugula, no?) and pistachio that looks lean on the duck but its flavor was so deep and rich the mix was an exquisite balance. 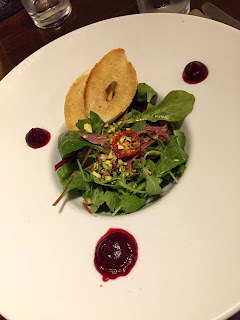 Then for my main I thoroughly enjoyed  roast fillet of hake with pepperade, Parisian potatoes and asparagus. We'll get to how ugly hake are whole in a photo in a couple of days, but they make a delightful, full flavored flaky whitefish when cooked, especially when cooked so well, the skin crispy, the flesh tender but far from hammered. That pepperade added color and crunch, especially as it included very fresh tomatoes for acid grip. Who doesn't want some asparagus and pea shoots on a plate when possible? And then Parisian potatoes--hey, don't blame your potato obsession on the French. (They were yummy, sure.) 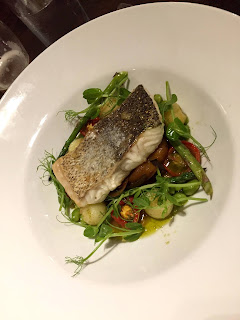 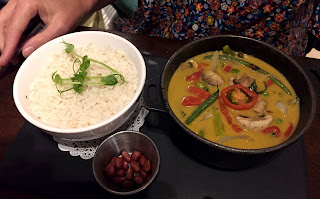 Cafe Merlot also offered one of those early bird deals, this time billed a Pre-Theatre Dinner, which is close enough to pre-poetry to work. App and main for just £18.95--beat that, USA.

Once again we had a very pleasant, chatty, aiming-to-please manager/owner(?) giving us advice on drink. Oddly, given they're under the pub, they only have Guinness and Heineken on tap, and of course given the name we probably should have had wine, but there is no Irish wine, is there. So because his wife is German, and he said for a long time you could only get this beer in Germany so he was proud to have it, he suggested this. 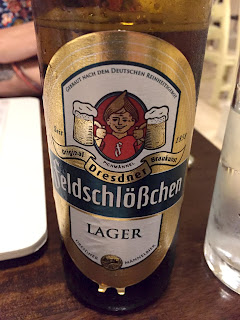 And that's how we had German lager in Northern Ireland. Fine for what it is, and at a meal there's a purpose to a beer that roots quietly from the culinary sidelines and doesn't hop bomb your taste buds to death. 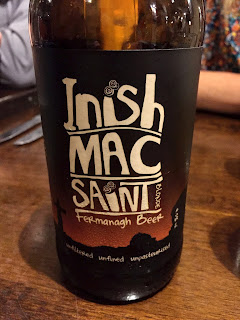 We also went local, with this Inish Mac Saint Fermanagh Beer, a bit more heartier ale than the lager, made at a brewery right on the Lower Lough Erne. A bit of a 'tweener beer, a pale with some Belgian notes, like, perhaps, a saison without the strength of its convictions. Solid enough.

Chryss and I drove the 8 miles out of Enniskillen to explore the grounds of Florence Court, a countryside estate that's part of the National Trust. Just like the Hearsts figured out owning Hearst Castle would hurts-so-bad their finances, so left the mansion to California ("but we'll keep the land for grazing and vines, thank you very much"), the landed wealthy in Ireland and England know when to give up their ancestral homes. That does mean the current creatures who live there seem quite at peace. Just ask the birds and the beefs. 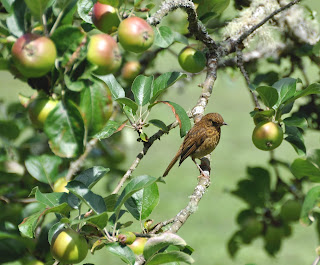 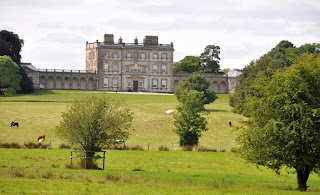 The place itself defiantly thumbs its nose at historical accuracy if you care to decide how and when it all got built, who the architects were, and that's sort of lovely for something so grand, to the point its history does feature someone billed the Dowager Countess. Even better, one of the highlights touring the grounds (once again, we only did that, especially since here all the furnishings have been brought it from elsewhere) was finding the grave of Nelly Woolly, the children's beloved dog. 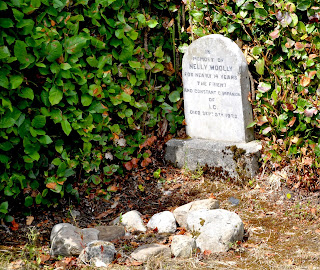 Otherwise, there was a lot of green--indeed, the Irish Yew that has propagated all Irish Yews in the world is here--plus some more gardeny gardens that made us, uh, green with envy. 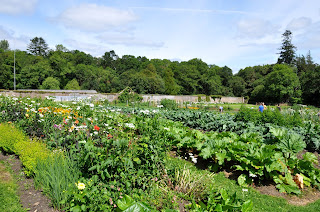 Our, perhaps, we simply wanted to get the job of gardener, as here's the Gardener's (Rose) Cottage. Not bad digs. 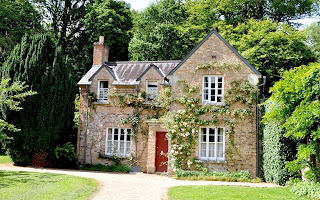 Although you'd think you'd get a riding mower for a place like this. 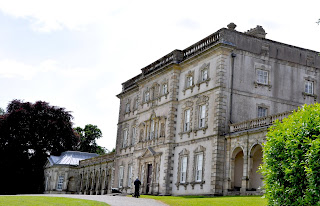 Afterward, back at our Air BnB, we did some exploring by the River Erne, and discovered we were actually next to a theater complex, too, the Ardhowen, not that we had time to indulge. But we did get a better look up the river to where a rail bridge clearly once ran. 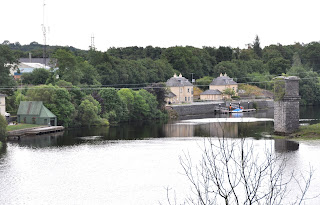 And while standing on the dock, got visited by a family. Dad made sure he looked fearsome, and we weren't quite sure if he was shaking us down for treats or simply saying no one messes with his cygnets. 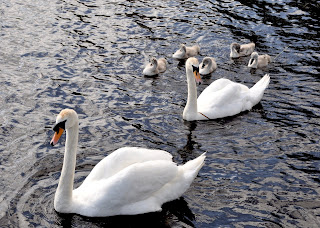 Go ahead to the post on Day 5 (Enniskillen, Devenish Island, Blacklion).

Go back to the post on Day 3 (Letterkenny, Enniskillen).
Posted by George at 4:21 PM