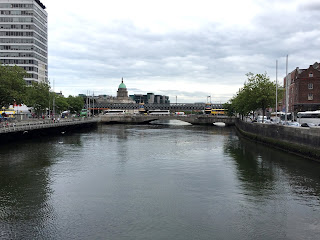 It's time for a tale, as three of Santa Barbara's Poets Laureate decided to book a 7 events in 9 nights tour of Ireland because the town's former mayor, Helene Schneider, had a great time at Dick Mack's Pub in Dingle once. (That's the simplest way to put it. There's plenty of un-simple to come, so let's just move on.) Please join me as I chronicle the trip, featuring David Starkey (PL III: 2009-2011), Paul Willis (PL IV: 2011-13), Chryss Yost (PL V: 2013-15) and their spouses, one of whom is me (a non-laureated poet--think of me as Stu Sutcliffe without the aneurysm). So expect some travel, lots of poet-talk, and, of course, food. George Eats knows no boundaries.

So Chryss and I red-eyed into Dublin with a day to spend before the tour took off.

David, who did the heavy-lifting of booking the tour, discovered you've got to slam to perform in the big cities, and our PLs are gentle folk, even when they write bitter things about old you know who in the White House. So no performances in Dublin (or Belfast or Galway). 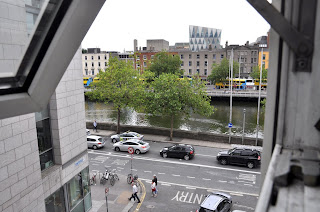 We mostly Air BnB'ed our way about the two countries, and above you see the view of the Liffey from our first evening in Dublin. Great location, mere minutes from all sorts of sites I'll get to in a different heading. (Sections: they give shape and squeeze you too.) The place itself was a bit down on its heels, a tad shabby, but heck, you wouldn't want Shane McGowan to have pearly perfect whites now, would you? It's Dublin, it's supposed to be a bit dirty and dear. And there's something almost comforting when a building's hallway smell (what was it? cleaner that didn't quite do its job?) doesn't follow you into the apartment you're renting.

So this is the part you've expected from a blog named after me being gluttonous. We got off the red eye and the bus to town hungry, with stomachs in different time zones, but wandered into Bewley's on Grafton Street, which is sort of Big Coffee for Ireland, but even better is in a gorgeously decked out old building, with stained glass, lovely wood; think Charles Rennie Mackintosh if he wasn't Scottish (I've ruined all of these Irish blogs now, haven't I?). And "frotties"--as the item on the coffee menu that looks like "frothy white" is pronounced. (Trying to keep track of when things go hard--"th" losing any of its "h-ness," so that number after twelve, for instance, is "tirteen"--or when things elide, for that town spelled Cobh is of course pronounced "Cove," was not easy. And we won't even get to Gaelic/Irish/Ghaeltacht until we drive out west....)

Lovely fruit scones, and then all the accoutrements--preserves, cream, butter that's practically cream. I might be wearing this breakfast still, that is if I could tell it apart from any of the other early morning moments with calories. Sure the place might be a tad touristy, but hey, we were tourists. 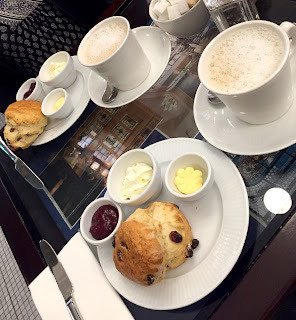 Then dinner, with David joining us (after he defused his rental car's wacky GPS that after five minutes auto-defaulted to the airport), was at the Winding Stair, not only named after a Yeats poem, but it also features a winding stair to the second-floor restaurant, as the first floor is a bookstore. They like writing and reading, the Irish. That's going to be a theme. It's going to be reason to want to go back. And maybe stay.

Dinner kicked off with Chryss and I sharing this Burren smokery, Terry Butterly and Stephen Kavanagh’s smoked fish plate with Dillisk bread, crème fraîche, pickled cucumbers and caper berries. That pate blending into the handle, that was the star. 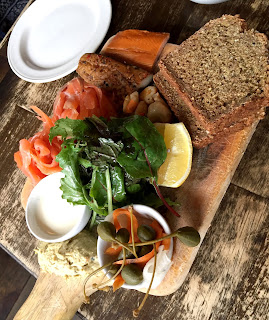 The board for one could have been dinner (as it was for late-arriving David). Our love affair with Irish bread begins here, so much goodness, and not just Irish soda bread. And who would have guessed an island would provide impeccably fresh fish? Well, Chryss, for here was her main, the evening fish special. 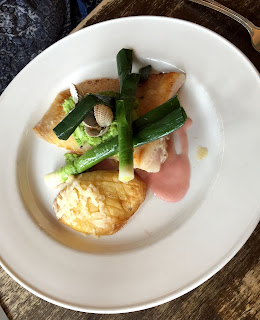 As I remember it (it's already a month ago!), it's skate wing with peashoot tapenade and mini-leeks for just enough of that onionness such a dish requires.

While I went for a bowl of the whole ocean, as it never quite seemed to empty no matter how many shells I plucked of their sweet meatiness, steamed east coast cockles, Connemara mussels and Clogherhead crab, which was sort of reduced to a sauce but still making the bowl even richer. (Thanks Deirdre O'Connor for this wonderful restaurant suggestion.) 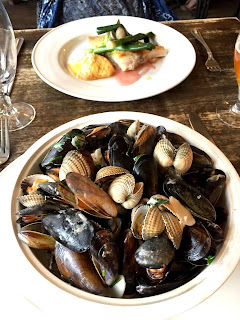 It's Ireland, and while of course they get annoyed about the Irish drunk image, it is an easy place to tip a pint or three. It helps most of their beers are lower in alcohol (Guinness is a mere 4.3% ABV), so certainly sessionable. And even the microbreweries--you didn't think they were only a U.S. trend, did you?--tend to take things lighter than in America. (Ah, our country, fists of ham and ales brewed from water from the Lethe.)

And while we wandered about Temple Bar the area, and saw the actual Temple Bar, we know what Santa Barbara's State Street can be on a Saturday night too, or at least remember it from our youth. So instead we had to visit Cassidy's, in honor of our daughter, and sure enough Bowie piped up on the PA within minutes of walking in. It's a perfect grungy-old-charming, scrawled with graffiti, lit with real candles pub, and indeed, the Guinness is better in Dublin, smoother, deeper, creamier. 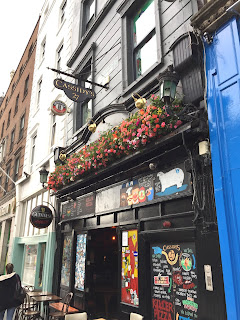 But I have to admit I still prefer a Russian imperial stout to a dry Irish one (check the last name? check my desire to drink heavy?), so for the most part on the trip I was on the hunt for local microbrews. One of the best, per-recommended by old friend Mary Finnegan, was Kinnegar, which we failed to get to, but there bottles (and even once there drafts) were available. Particularly the Scraggy Bay IPA. 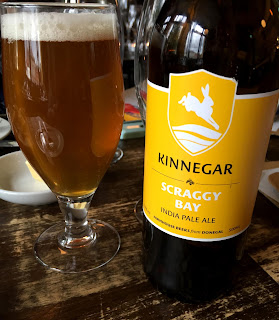 Surprising heft to it, given it's only 5.3% alcohol. Not a West Coast hop bomb, but pleasantly bitter and balanced, so a perfect food pairing. (Oh, and Winding Stair also offered some amazing wines by the glass--those cockles really washed down well with a peachy, flowery, zippy Chateau Dereszla 2014 Dry Tokaji.)

We closed the evening at the Dingle Whiskey Bar, as a sort of prelude to our visit to SB's sister city. We opted to share two flights, one Irish Pot Still and the other New Ireland, as it's good to get a lay of the malted land, no? The Irish Pot Still featured Green Spot, Powers John Lane, and Red Breast 12; the New Ireland offered Slane, Silkie, and Dingle Single Malt. For two sips or so for each of us, each seemed worth further exploration, though I had a soft spot for that Powers that left my mouth pleasantly peaty. It's a cool spot, with helpful, informed service, good tasting notes, and you pretty much feel like you're aging in a barrel yourself, given the walls are made of curved staves. Who wouldn't want to be full-flavored and complex? 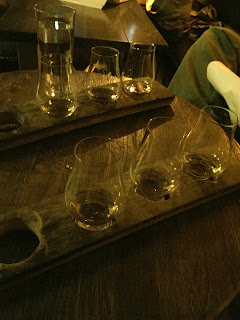 So of course we saw stuff, too. Davy Byrnes before it was open, and thought of Leopold Bloom's Gorgonzola sandwich. Forget to get a photo. Didn't get to do any of the other Joyce stuff (so I have to go back!). There are churches, lots. 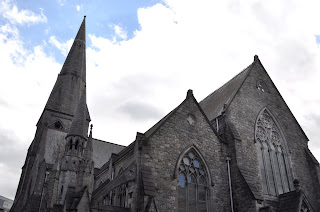 And everyone likes to polish the bosom of the Tart with the Cart. 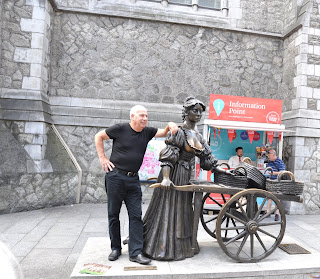 Nobody polishes a scary squirrel. 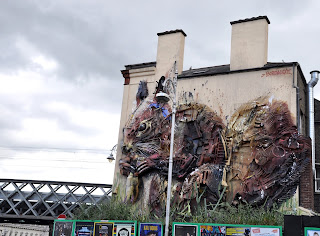 And then we hung out at Trinity College, as universities have this pull on us. We visited the Book of Kells, so crowded it was hard to enjoy it as much as we knew we should. Just think about the persistence and faith and steady steady hands of those illustrators. And if you followed that link, how amazing is it there's not one image on that page of information? How academic of you, Trinity College. 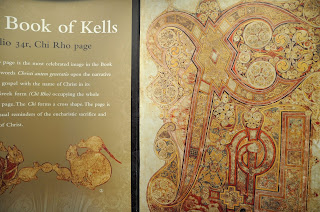 I sort of preferred The Long Room, as there's nothing that beats storeys of books. Just the smell of it. It proves knowledge has a scent, a bit of past, a hint of death, and so much we don't know. All the busts are of men, though. Ah, history. And all that barreling sort of takes me back to the Dingle Whiskey Bar. Maybe aging isn't so bad. 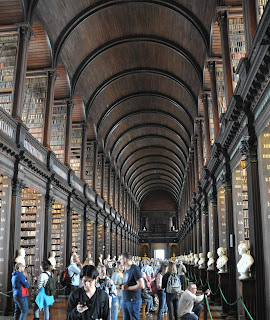 Of course you have to watch really thinning out. For we also went to the Zoological Museum, as we're lovers of animals and the bones and taxidermy they leave behind. Most of the exhibits are old, too, so you get that lovely doubling: here's what people then thought was fascinating from an even more distant then. Like this guy. 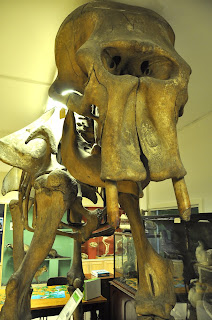 Or our favorite, who gets a bit obscured by the glass he's behind, a sloth not that indolent to fail to express his dismay--forever, it turns out--to become a display for posterity. 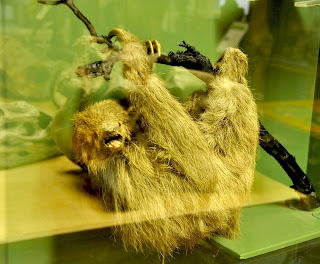