The Muse Is Always Half Drunk In New Orleans 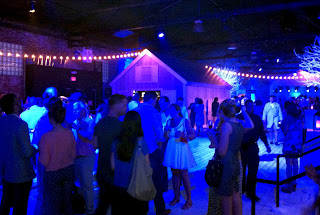 Tales of the Cocktail is a marathon, not a sprint, as one of the drink descriptions at Arnaud's French 75 put it, but I did have to write the sprint version for the Indy, the long but not long enough feature that will run August 9. In the meantime, I want to provide some daily snapshots to give you even more of a sense of what a festival honoring the cocktail, in New Orleans, means for one's mind and liver and deodorant.

Post-plane touchdown thunderstorm, Thor v. Zeus division. Even after that, hot and humid, which I'm pretty sure is human-controlled as a clever plot to keep you inside in air conditioning, eating and drinking.

"This is insane--I've only been here two hours and I already have icing on my arm."

Welcome Reception at the Contemporary Arts Center sponsored by Absolut

You know there's this dream in your head of the perfect happening party, the kind even movies never even seem to nail properly, when the setting is magical, the drinks tasty, the people fun, and a row of models greet you as you enter? Well, that was this shindig. It snowed. Inside. The blue lighting added to that effect, but then there were all these separate bars to go to, themed sort of internationally, like It's a Drunk World After All, but without the insipid earworm of a song. (Instead, a DJ not quite getting people to dance, but perhaps that's just because we were all too f-ing cool.) You could get temp tattoos (not many takers, as most people there didn't have enough un-tatted territory on their bodies for one). You could pose with New Orleans appropriate costuming (masks, etc.) for an Absolut ad photo. You could get a t-shirt silk screened with one of 8 designs. You could drink, plenty--probably 20 different Absolut cocktails, including one made with dry ice, one featuring ice cubes carved into diamonds. One spot featured Dale DeGroff and Audrey Saunders side-by-side making you drinks like the king and queen of boozy prom. The waitress with the little grilled tuna cubes remembered you liked them and that one of you was prescatarian and kept hunting you out with a fresh tray. All the models went back to your room at the Monteleone afterward. Perhaps I made a part of this up. 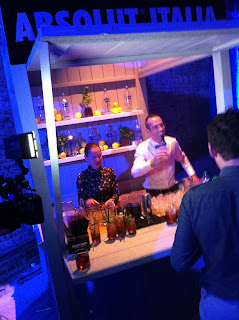 At a tasting called Better with Age, where I somehow avoided any jokes about my magnificence because of my midlife status, during a blind tasting I actually preferred the young Glenfiddich to the 15-year aged one, mostly because it packed more punch so stood out in a room of fantastic tequilas, whiskeys, and Armagnacs, and a bit because it was aged in old Solera barrels, giving it a pleasing Sherry push.

You can make a lovely sipping whiskey...from wheat. At least Bernheim Original Wheat Whiskey can.

Evan Williams does a single barrel whiskey that you can buy for $21. Maybe the best value tasted at TOTC.

You actually can make interesting cocktails with vodka. It's a challenge, but that's the fun, no? 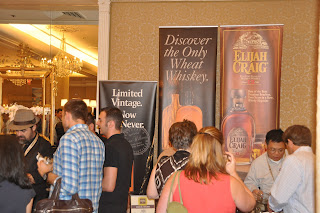 Herbsaint. We'd do further homage to Chef Donald Link on the trip, but this was on the way back from the Absolut party so we decided to do a bit of the small plate action and everything was pitch perfect with prime ingredients. Simply the fries, with pimenton aioli not so simple, were divine. We also enjoyed Seared Louisiana Shrimp with Summer Squash and Chili Oil and Butter Poached Gulf Tuna with Criolla Sella Chili and Lemon--the seafood clearly the stars of each plate, but all the other ingredients whipping up spectacular supporting symphonies. We had a dessert, too, that the receipt calls a BB tart a la mode, but somehow we can't remember what the BB is--butter and bourbon is what I'm going to say.


Other Drinks* Consumed Not Covered in the Above:

Tito's Cherry-Vanilla Limeade, Jasmine-Spiked London Lemonade, a Sazerac at Herbsaint, a Vieux Carre at the Carousel Bar in the Monteleone, and an Abita Turbo Dog draft at Acme Oyster House, where we ate after our long, foodless plane flights out, a soft-shell crab po' boy and an oyster po' boy and some raw oysters, too (see below) 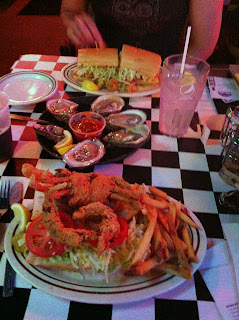 *Note, this really does just mean cocktails and beer, so liquor straight is left out of the equation.