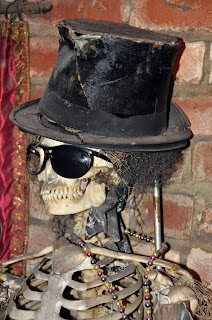 No, that's not me after just one day at Tales of the Cocktail, that's Papa Gede at the Voodoo Museum, because when in New Orleans you need to know how not to become a zombie, let alone know enough not to drink one. (We won't even begin to consider the Hurricane--if you want to drink just to get smashed, it's cheaper to buy a mallet you can reuse and just thwack yourself in the temple with it and repeat as necessary.)

Does this photo capture the thrill of t-storms tearing down the Mississippi? The rain eventually made it to our side of the river, too, and we tried to wait it out, but finally ran a single block in it, and were soon ice cubes, as we'd been soaked and then back into an air conditioned inside. 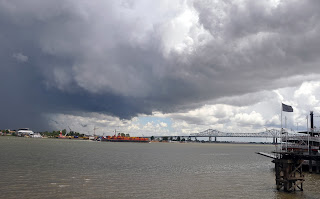 "This Blackwell pool party is kind of like MTV meets rum--so many yo-ho-hos."

"Why isn't their promotional giveaway one of the Becherovka chick outfits?" 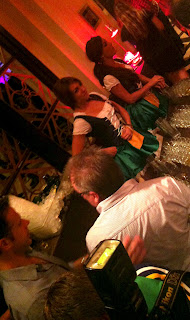 The only seminar we attended, one called "The Drunken Botanist." It was a sneak peek of science writer Amy Stewart's next book, and she presented very well, doing that "I've come across a whole bunch of cool things, wanna see?" style of a "lecture." Her tag line was, "You're taking plants and putting them into bottles," but then she told the tales of some of the coolest plants we've done that with, including a bunch that might be a titch poisonous, like tansy and gentian. Yes, there was a cocktail, too, a Pineapple Surprise, redolent with a pineapple sage leaf as a garnish, and with that sage, tequila, Kummel, agave nectar, and lemon juice.

Drinking event of the day was the Diaego Happy Hour "A World Class Affair," like the Absolut party the night before, but not quite as magical even with a wider range of liquors used to make the 25 or so cocktails available to sample. And, for something odd, a strong drink with which the bartender offered a shot of granola back as a way to cut the kick. 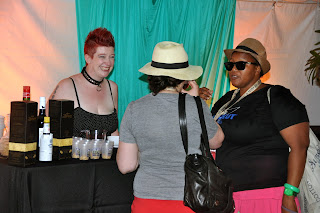 A mouthful of granola after a shot of strong drink is pleasing.

One scientist swears that the variety of apple doesn't matter, it's the type of yeast that makes the flavor difference when you make hard cider. It's not that I find that fact so odd, it's that somewhere on a college campus a professor gets to do this for his research. I want to start my career again.

The margaritas at what seems to be the tourist trappy El Gato Negro by the French Market are quite good, with actual pulp from the fruit that's supposed to flavor the drink (mine was pineapple-cilantro). So if you get stuck there in a rain storm, don't feel too bad.

DBA doesn't open until 5. So if the door is ajar and you walk in at say, oh, 3, and then walk back out, the guy who finally realizes you were in there will act like you were trying to rob the place.

This was our best overall day of eating, a very good lunch and even better dinner. We hiked out to Butcher, the deli component of Chef Donald Link's (also owner of Herbsaint from the evening before) Cochon. Now, this wasn't exactly the perfect place for pescatarian Chryss, but they kindly made a roasted turkey sans turkey (arugula, tomato, Fontina, and basil pesto aioli on 7grain) for her and even cut the price a bit. I went whole hog, and couldn't refuse the pork belly with mint and cucumber on white. This place even does white bread well, and since mint and cucumber are two of our favorites to play with in summer cocktails, this sandwich called out to me like a long lost edible friend. There was also microbew in bottles, totally needed after the walk out along Tchoupitoulas (its name is as long as our trek), and mine was particularly southern, a nut brown made with pecans. That cucumber-tomato salad side was summer, too. 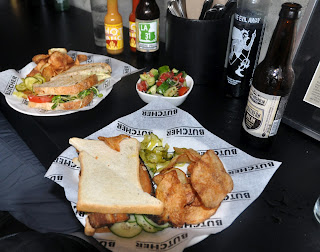 Then, for dinner, Bayona. I've been a huge fan of Chef Susan Spicer since she published her cookbook Crescent City Cooking, so keenly anticipated this meal and it didn't let me down. To get in the mood I sipped a Bayona martini, Hendricks gin with a cucumber slice for garnish and a bit of rose water instead of orange bitters--very sophisticated. Then the food started, with Chryss having a special "salad," crabmeat with a jalapeno kick in an avocado soup.(Oh, excuse the no flash iPhone pictures--it's a classy place so we acted as restrained as we could.) 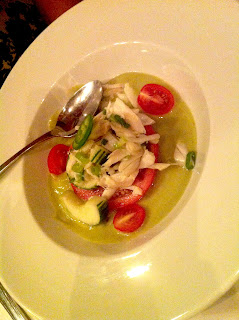 I had to try her famous sweetbreads, because I'm offal like that. She does have the recipe in her book, btw, but I haven't attempted to convince my butcher I need the "noix" and not the "gorge" sweetbread, or as she calls them, tenderly, the "heartbreads," aka pancreas. (Never underestimate the power of naming.) They are a wonder of eating, though, fried crispy, yet so tender inside. Again, in her book she explains a randy old chef taught her the procedure and that he suggested "they should have the feeling of a firm, young breast, and would say that looking directly at me to see me blush!" We've got all our hungers so easily cross-wired, don't we. But back to the plate, beneath the richness of the sweetbreads are little squares of beets and then super-crunchy pan-fried mushrooms, and those two totally ground the dish. The sherry-mustard butter sauce sends it all singing. 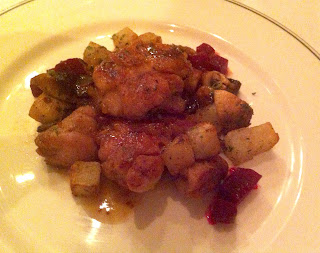 Trying to avoid going on and on, for mains Chryss had the triple tail special, done very New Orleans style over peas that weren't black-eyes, but certainly seemed to be. 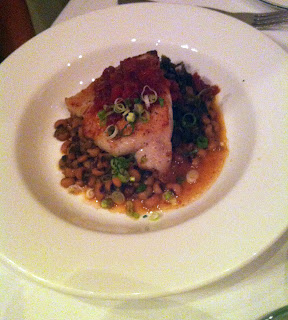 I had one of the best pork chops of my life, truly done medium rare and not in the slightest chewy despite being very thick, with mango salsa and a deep sauce and great green rice--more Caribbean than New Orleans but totally delicious. 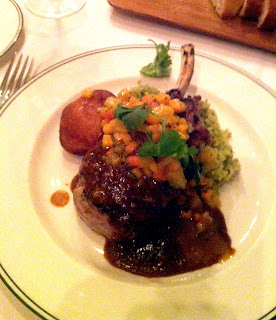 And we couldn't, ok, I couldn't, resist dessert, a classic chocolate caramel tart with the crust made with the wisdom of a thousand mothers, and hazelnuts, and for a bit of twist, some Earl Grey ice cream. 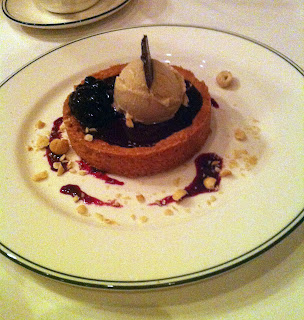 Other Drinks Consumed Not Covered Above:

Bloody Mary from the Absolut Bloddy Mary Bar (every hotel needs free Bloodys from 8:30 - 10:30--it's a reason to wake up); a couple of drinks at the "Tales of Two Cities: Bean Town and the Barbary Coast" thingee Anchor threw; a Woodford Reserve Bluegrass Breeze; some Blackwell rum drink; Becherovka, a Czech liqueur, so close to my Slav (no, not slob) roots; and an adult chocolate milk. Note: this day as every, many of these drinks I sipped twice or thrice and then put on the clean-up trays. Nonetheless, I am a professional food and drink writer, so do not try this amount of consumption on your own.