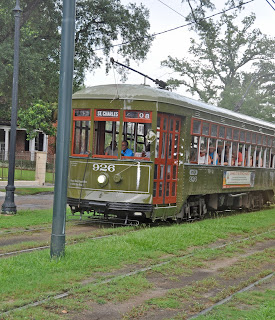 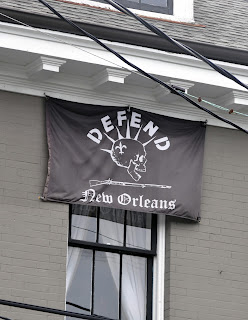 Two different ways of looking at NOLA, one a bit more romantic than the other, although I never felt much defended against--everyone seemed more than welcoming. Still, there's that part of New Orleans that seems a bit wild that makes it more thrilling, isn't there? The air feels a bit like sin.

Today's daily downpour comes courtesy of the people who decide to shutdown their establishments for a week (or more--one place was closed since May 19!) in the summer. How European of them, and miserable for us, as we did a lovely hike that slowly converted into a miserable death march through the Garden District this day. Plenty of cool shopping and architecture and people watching along Magazine St. 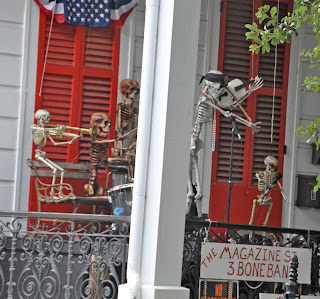 One fun stop for a beer (see surprises). Then a lot of disappointment trying to find a place to: eat lunch, stop sweating, stop moving, avoid the deluge clearly on its way. Domilise's closed. Casamento's closed. Le Petit Grocery turns us away at 1:40 even though they supposedly serve lunch till 2:30 and we assume we look too bedraggled and be-touristed (caps! a big camera!) for their preciousness, or did I mean pretentiousness. (Ha, no good review for you!) A fourth place whose name is washed away by the beginning rain also on vacation. We wonder if we missed the "Garden District--Closed for Summer" sign when we entered. Luckily we find Slice, with solid pizza with an intriguing cornmeal-featured crust and a good enough salad. And a roof. Best restaurant feature, ever.

"After four days of cocktails, don't you want a beer?"

(Clever marketing by Newcastle, giving beers away at Happy's, which just happened to be a breastaurant, and schoolgirl outfits and beer after lots of drinking, well, they might just have something there if their goal is to part middle-aged men from their money.)

After recovering from our Garden Street debacle a bit in the hotel, we hike back out to the Hyatt Regency, which seems too corporate a place for Tales, in a way, but there's a Taste the World's Best Spirits Grand Tasting to attend. It's the kind of event where all the Johnnie Walker's are on a table for you, through the blue, green and gold, next to a table of the Classic Malts (when in doubt, seize the name and make them pry it from your peat-y fingers, I guess)--Talisker, Dalwhinnie, Lagavulin. Yeah, and that's just whiskeys and leaves out my favorite, Aberlour's A'bunadh, aged in solera casks and presided over by this dandy chap. 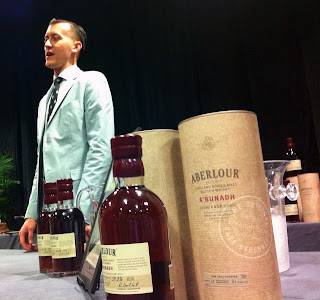 There was Lillet with their new Rosé, that you want to drink straight and fiddle with at the bar too, and Del Maguey Mezcal with a good 8 varieties to try and you want to linger just to play with their little clay tasting cups. Somehow, the only edibles at this event, though, were chips, popcorn, pretzels, and nuts. Seemed like they thought it was a light beer fest, and, alas, nothing was light about these fine sips.

So, our spirits emboldened by consuming the world's best spirits, we take the escalator down a floor and discover the Spirited Awards are beginning and no one is really paying attention if you want to sneak into the pre-event reception. We figure, as long as we don't go in and sit down for dinner, who will know we don't belong? Part of it is this is the first and last dressy event, so we might stand out a bit for being too casual, but cocktails make everyone civilized, as long as you don't cut in line when they're hoping to score a slider or grill cheese. We have some more drinks, one a pinkish straight martini, and that makes me wonder if I've had too much. 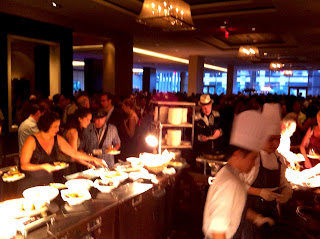 Not that we saw this while there, but it seems they really do the awards portion right, too, based on the videos they ran during the event that are kindly now on YouTube like this one, "Shit Brand Ambassadors Say":

House Spirits Distillery out of Portland, OR doesn't just make Aviation Gin, and will make you a fine whiskey Bloody Mary. Conveniently this will be in an art gallery on your way to Cafe Beignet.

In swagland, the loot is always greener in another conventioner's hands. Where did those leather-looking books go at the Herbsaint tasting room? How did we miss that one attractive bag? Why do we think we need everything given to everyone at TOTC?

Parasol's is our dream of a neighborhood bar--big scary dog that's actually nice allowed inside, people of all ages and races, locals and us, smokers and not (OK, not my favorite part about New Orleans bars--I've become a true anti-cig Californian), a hipster bartender with a Dr. Who obsession, and NOLA Brewing beers on tap, including my new favorite, Hopitoulas...of course a West Coast IPA. 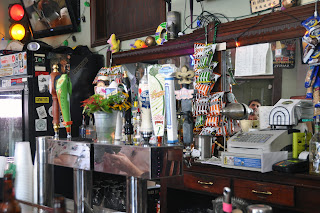 The Columns is nowhere near as fascinating when Susan Sarandon and Brooke Shields aren't staying there.

Even closer to the Monteleone, Cafe Beignet has better beignets than Cafe du Monde. There, I said it. Much doughier, less sugar, better coffee. It has nothing to do with having had three Bloody Marys before the first fried dough hit my stomach, promise.

We also had a lovely late dinner at Eat New Orleans, a place that takes the classics and freshens them without going frou-frou. A mustard green and artichoke gratin to start was everything you could hope--rich with the two different textured and tasting greens, just enough of a creamy sauce but not so much you need a defibrillator nearby, and some crunchy pita-ish chips to scoop it all with. Chryss has a butterbeans with shrimp bowl, I had the trio--cup of gumbo, cup of red beans, a roasted stuffed red pepper, rice, and a Caesar, and we both hailed our meals. Simple, satisfying, soul-quenching. We also got an inadvertent show out the window as a drunk crashed on the curb, letting his two dogs loose to wander out into Dumaine Street. Luckily, they didn't get run over; the cops visited the guy but left him; our waiter brought out a to-go tray with water for the dogs. Ah, the humanity. 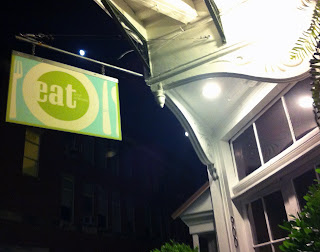 Other Drinks Consumed Not Mentioned Above:

Eat is BYOB, so a six pack of Abita Jockamo IPA from the corner shop down the street did the trick. At one of the Saveur Snack Stand events we got a pleasing Breckenridge Rocky Mountain Rickshaw, zipped with some ginger. Martini (as in Rossi) concocted a very elegant The Monteleone Cocktail--not to be confused with the different one the Carousel Bar serves--of cognac, Martini Roasto Vermouth, Amaro Avena (which will be in the surprise list tomorrow)--and then a misting from a perfume atomizer. When asked, the one bartender said it was Chanel No. 5. (Actually it was Herbsaint--even better.)

And we finally got to the Sazerac Bar in the Roosevelt Hotel to enjoy the namesake drink in a truly swank location ringed by Paul Ninas Art Deco murals that make you expect to see some unholy drinking party of Huey Long and Noel Coward to wander in. A very civilized spot, and fine drinks, although their Sazeracs are much redder than mine--perhaps that's because I use both Angostura and Peychaud's and they only use the carmine latter. No matter, can a lovelier thing be done to rye than make it into a Sazerac? Even I'd be better with the perfect combo of bitters, citrus, sugar, and a bit of sticky Pernod.
Posted by George at 10:00 PM