How fitting it was that for our anniversary celebration we got to enjoy one of the best marriages of talent Santa Barbara could muster on Sunday night at a pop-up dinner at Municipal Winemakers featuring Cindy Black of the Blue Owl cooking using the seafood caught by Sea Stephanie Fish (aka Stephanie Mutz). This was truly a feast, listed as a three-course meal but much much more, especially with Dave Potter pouring generously, and for the last two courses from milk jugs (you can age in them! only kidding) since the 2011 Moorman Vineyard Pinot Noir and the delectable 2010 Lopez Ranch Cucamonga Zinfandel Port aren't bottled yet. But that does mean there's lots to look forward to from Municipal, and when I go on and on about the food you didn't have, there's at least that consolation.

The evening kicked off with lots of 2011 Bright White Dry Riesling, the perfect pairing for a salad that could have easily been my entire meal and left me totally happy. Part of that happiness comes from getting to include the words Semicossyphus pulcher into this entry, a name much more suggestive and catchy than California sheephead, which is the type of fish featured in an incredible salad. Stephanie joked she liked to call lobster "rich man's sheephead," and it did have more of that luxurious taste and texture, especially when Cindy Black got done with it, both grilling it and then pickling it (or vice versa?), so it had some of that good charcoal flavor and then the quick zing of the pickle-process too. That set the chunks up well to star in a salad full of all sorts of greens, from mint to dandelion (I think) to other herbs too numerable to mention. Then add pistachios, grapefruit, and tomatoes-a-bursting with flavor for more brights and acids and different levels of chew. Oh, and there was even quinoa, and it was so good one of our finicky tablemates exclaimed afterwards, "That's the most quinoa I've ever eaten, and I liked it!" 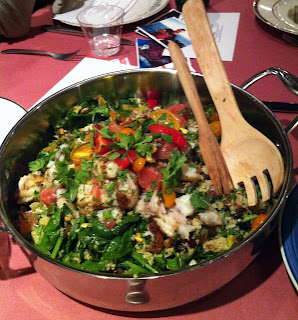 The menu for the evening suggested that for course the second "You should go outside." There we were met with platters of rock crab, mallets, and trucks waiting to whisk our soon-to-be-crab-besplattered clothes off to the dry cleaners. (OK, made that part up.) We got to whack away at our crabs, served cold and doused with a lemongrass-chili oil, plate them up, and then head back in to enjoy, where a platter of grilled vegetables (oh those romano beans--now that was edible summer rich in garlic oil and carbon char) and corn grilled in uni butter awaited. Now, I did my time in Maryland so I still long for the tradition of camping out at a table piled high with Old Bay steamed blue crabs that you pick at all day while drinking beer, so this was my idea of a great time. Rock crabs are heartier than blues, though, so one of my thumbs took one for the team getting through the shell some--the good news is a bit of blood is a fine accompaniment to lemongrass chili oil. By the way, in that photo, that's a big chunk of bread on my crab, soaked with the oil, too, because you can't get too much of that good a flavor. 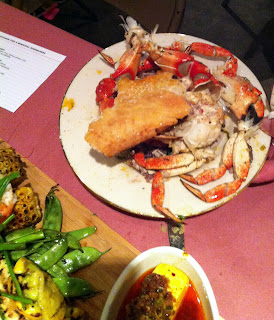 Here's the vegetable platter we got nowhere close to finishing, despite 6 of us at the family-style-served table. Warning-the tomatoes in the photo are yummier than they appear. 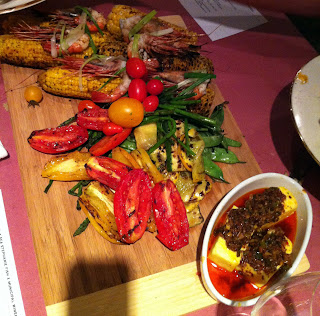 I didn't get a photo of another portion of this feast, Kellet's whelk flatbreads, another item I could have eaten all night. Black has a way with dough, so simply the surprisingly thick bread itself was wonderful, with good pull on the inside and some crunch on the out, but then the chopped whelks were a cross between abalone-snail-clam to taste and not in the slightest rubbery, and atop all that was a healthy handful of chopped cilantro. So good.

As for dessert, there's no photo of that either, as I think I ate it. Dessert, that is, not the photo. I'm a sucker for gallettes, as the dough is always tasty and it doesn't bother with nicety--it's just folded over in a rustically beautiful way and let's the fruit peek out suggestively. (The suggestion: eat me.) This gallette, fired up in the oak oven so it had that extra character, too, starred apples and grapes, but then also was sprinkled with figs and berries, so was a fruit-wonderment. I only regret I was too full to have two pieces.

Cindy, Stephanie, and Dave, you all knocked it out of the park.
Posted by George at 8:00 AM