The Blue Good Bye to You 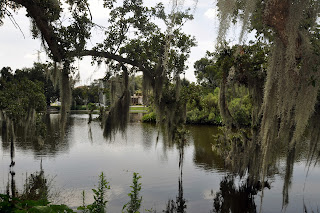 Had to have one bayou-esque shot, even if this is just one of the lake-like spots in New Orleans City Park out by Bayou St. John. We spent a big chunk of this Sunday out here, since TOTC had pretty much wrapped up and we were in NO and wanted to see the sites, not just drink them. You can take the Canal St. streetcar out, even, which is good given the Charles St. one has a big chunk of its route closed for repairs, hence death marches like the day prior.

It does not rain this day. We are sore afraid. And still sweat enough to make up for the lack of precipitation (which you can't spell without perspiration).

"Oh my, today the [Monteleone] lobby sounds of children, not barkeeps who look like the dream of the 1890s."

We do nothing directly TOTC related this Sunday, as there are few events on the get-away day. We do not pass the Bloody Mary Bar. It is closed. We are lagniappe-less.We do enjoy the trip up to City Park, where just the park itself is gorgeous and then there's historic stuff like what was a casino and now, sadly, is a souvenir/snack shop but still has this great mural. 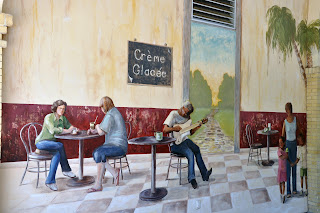 There's the Sydney and Walda Besthoff Sculpture Garden, with plenty to contemplate amidst a bucolic setting, so much so nature often makes its own comment on the art. 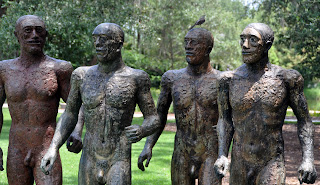 There's the New Orleans Museum of Art itself, that we felt we barely got into but still enjoyed the extensive glass, pottery, and ceramics collection--how cool so much that was just usable house stuffs are now art (and how impoverished so much of our own daily wares seem by comparison)--, plus the small Dario Robleto exhibit was fascinating--how much totemic power do our fetishized pop object possess? Does that transform the mundane into art? And you can get basil lemonade at the cafe at NOMA. Very nice. Plus we learn that only in New Orleans would they try to save their daily newspaper by suggesting you drink cocktails. This is so totally my kind of town.

Even a place that borders on one of the most touristy spots in town, Jackson Square, can still be good and not a trap. Stanley just does food straight and good, with fine service and Bloodys with zesty pickled beans and okra (had to pay for the darn thing, but I'll get over it). Here's an eggs Benedict with a brilliant addition--fried oysters. Perhaps surprise of the trip, this is as close as we got to any of the town's magnificent cemeteries. No doubt we'll be back. 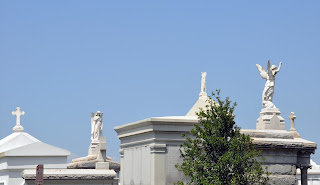 This is actually a comment for Monday, but I'm not doing a Monday entry as it would be--"damn, planes are small and we have to be in 3 of them to get home." In addition to that, the food at the New Orleans airport is surprisingly blah. While in San Francisco you can get a tasty tuna panini and a giant Speakeasy Big Daddy IPA and feel much better about flying.

For dinner we went to the dopily named GW Fins that overcame that initial disadvantage to be a treat. I started with the seafood gumbo that was richly rouxed with seafood that wasn't mere over-cooked floats but shrimp and crab with flavor. Chryss had the lobster dumplings, more like potstickers but feathery light with a bonus boost from some lobster butter. Then for mains Chryss had the blackened swordfish as you've got to have something blackened in Louisiana, and they do it right, not searing the crap out of the fish but giving it a quick shot with some very good spices--it added, and wasn't meant to hide. I had to try their signature dish, Scalibut, which sounds like the name from a very bad musical about gossip on the Gloucester fishing fleet but is actually scallops sliced and "fused" around halibut as a sort of scallop-coat. The two textures and flavors play well together, indeed, and while it's a bit of a stunt, it's yummy, too--not that some lobster and tomato risotto hurts the plate any. Sorry this iPhone photo isn't so great. And we paired it all with a bottle of Tablas Creek Patelin White, to get us ready to come home. 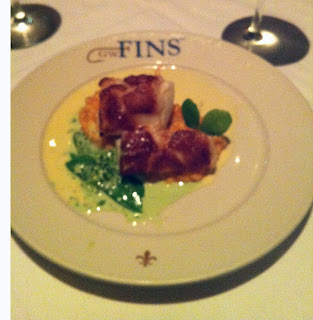 Other Drinks Not Mentioned Above:

Since we had the time and didn't get there prior, we pre-gamed for dinner at Arnaud's French 75 [sorry, that link opens with music], directly across the street. This is another NOLA classic, richly woody with funny monkey statue lights and dressed up service and incredible cocktails. Somehow we passed up things like a Herbsaint Frappéthat was barrel aged and a N'Awlins Christmas in July Chatam Artillery Punch (that truly would punch you as it features tea. Catawha wine, rum, gin, Cognac, rye, orange and lemon juice, sugar, Benedictine, Champagne, and love). Instead we opted for The Dealers Have Chosen, with Chryss enjoying two "shaken and "refreshing" stimulants from the PDT Cocktail Book and I had two "stirred and boozy remedies from the Northstar Cocktail Book. Do we exactly recall what went into those cocktails? Alas, no. But they--all four--pleased perfectly, doing exactly what their descriptions suggested. My second, that I could swear he called a St. Martin (or should it be St. Marteen and Dutch?) was a mighty yet smooth blend of gin, Aperol, and Averna, and I wish I had one now. We also got a shrimp roll, as we were drinking and not eating and hadn't since Stanley, and didn't want to go all Kowalski on the refined crowd thanks to our liquored-up empty stomachs. 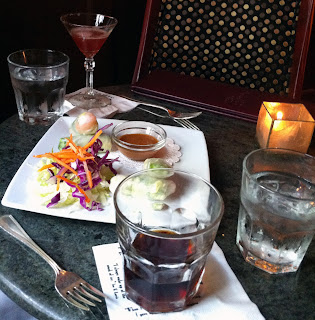 And then after dinner, after a last loop about the Quarter avoiding the sodden sadness that is Bourbon Street, we settled back in to the Monteleone and had last call (ours, not the bar's) at the Carousel, as it was easy to fit and nearly quiet and Faulkner and Williams drank there, so here's a corpse reviver #2 and a sidecar and a wish to be back very very soon. So many tales, and not nearly enough time to tipple them all. 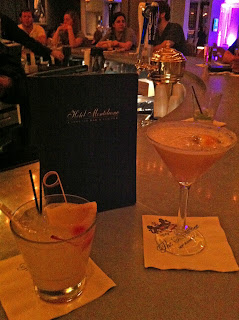