You Ate A Mouth Full 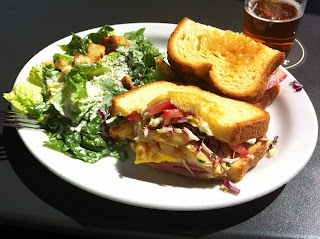 Just a quick one to alert you to one of the best sandwiches you can have without traveling to Pittsburgh, and who wants to do that anyway.* Hollister Brewing Company is offering my favorite special of theirs, a Primanti Bros. Sandwich.What is that, you may ask, and you couldn't ask if you were eating one as it's a true mouth-fuller: Niman Ranch ham, melted Fontina cheese, coleslaw, sliced tomatoes, aioli and HBC duck fat fries sandwiched between Texas toast. To do it right you have to get the optional fried egg on top, too, because, really, are you suddenly counting calories? Plus you need the soft yolk to ooze out and coat everything, helping it keep deliciously together. Somehow the Primanti Bros. legend is they started putting everything on the sandwich as it was easier for truckers on the go to eat them, which just means it's very easy to spot the truckers in Pennsylvania--they're the ones with the food-stained pants.

I'm not usually into the food-as-dare kind of thing, but the co-mingling of all those flavors is spectacular, especially when washed down with a pint of one of Eric and Noah's fine ales--the batch of White Star XPA right now is creamy and light and would make a fine balance with the bulk of a Primanti Bros. sandwich. Or perhaps go with one of the two slightly unusual Belgian-ish beers on right now, the 5th Anniversary Ale (it's got flowers and honey and is neither too floral or too sweet) or the Here and There (a mild Belgian, if that makes sense, all about elegance, and not too alcohol-heavy, either).

*I kid Pittsburgh, having been there a bunch from 88-94 and liking it, especially Kennywood. Plus I really want to make it to what looks like a beautiful ballpark PNC (no stadium this). Three Rivers was a football concrete doughnut, but I did get to see Barry Bonds pre-Clear a bunch. I wonder if a roided Bonds would have thrown out Sid Bream in 1992? More likely he would have launched one to the backstop.
Posted by George at 8:00 AM