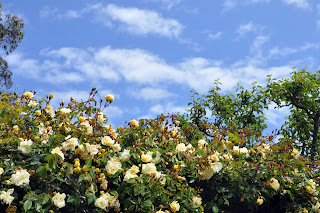 It's a sunny, rosy day in Mendocino, so get those pruners out! At least that's how I see the photo above, one of many we took of the bounteous botanical gardens in Mendo. If you have a thing for rhododendrons, this is the garden for you--it's a riot of bloom in May. Luckily we went to the 47-acres of the gardens well-fed, for another MacCallum House bonus is that breakfast is included, and it's sit-down, order from the menu, and enjoy it with a complimentary mimosa, even. (Don't mind if I do...it might be a Tuesday, but it's vacation.) I was very happy with my Benedict, and Chryss liked her breakfast burrito so much, she ordered one both mornings we were there. This is direct food made good by a sure hand and high quality, fresh ingredients. 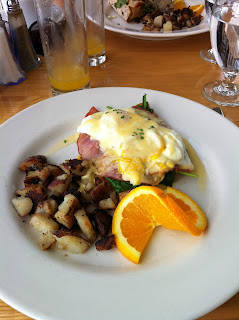 In between is walking, lots, along the headlands and along the mouth of Big River. And then that trip to the Botanic Gardens. All that walking meant we got a hungerin' and a thirstin', so we went looking for a deer we could chase down and a fresh mountain spring. Oh, ok, we just continued up the 1 back to Ft. Bragg, and let Yelp once again be our guide, leading us to Piaci. It was after 2 so we worried we might be caught in the not-serving-vortex between lunch and dinner, especially when we first peeked in and saw no customers and just one worker, back in the kitchen, busy prepping at a meat slicer. But we also saw this beer board, so we asked if it was too late to get food. Turns out it wasn't, and even better, it meant the lone worker sat down on his side of the bar and we chatted away. 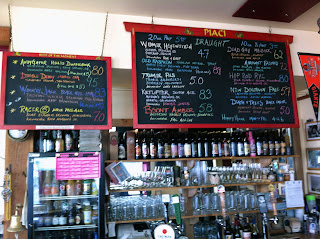 Topics ranged from Piaci having some roots to Russian River Brewing--and indeed, their styles of thin crust pizza are similar--to the man coming from the Yucatan, but really liking it in Fort Bragg, to how border towns (like Tijuana) are bad, as they can attract the worst from both sides. He knew his pizza and knew his beer and by the end we knew he had a hard time communicating with his teenage daughter and we got a beer for free. It was like making friends, which northern California seems to do so well. Now why Santa Barbara can't have more casual spots like this--good, simple food, great beer--I don't know. To add insult to injury, I had to be introduced to one of our beers from (mostly) back home, Firestone's Wooky Jack, way away here. It's a silly name for a fine RyePA with a lot more malt and alcohol kick than most.

We did something in-between lunch and dinner, promise, but this is a food blog, so whatever it was doesn't matter. Let's let this photo, more or less the view from our room (well, outside the fence that protected the hot tub privacy by our room), suffice as a breather. (And no, we didn't see or hear any ghosts in the graveyard. Rats.) 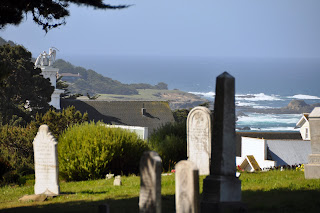 Dinner was at the MacCallum House itself, and somehow we lucked into having one of the several small dining rooms all to ourselves, too--a bonus romantic touch. Our breakfasts had us very excited for what was to come, and we weren't disappointed. Chryss kicked off with the hearts of romaine salad, sans the bacon (they're very accommodating de-meating stuff for vegetarians, btw) but with Point Reyes farmstead blue cheese dressing, herb croutons, roasted peppers, and oil-cured olives. Reading that list, you know it was fine. I had the soup of the day, a green garlic/leek deeply rich with those enticing spring flavors. Somehow we both skipped the grilled clam flatbread with Trumpet Royale mushroom duxelles, garlic, Vella dry Jack cheese, house made mozzarella, oregano, and chile gremolata--partially because we just had pizza for lunch, partially because it sounded like a main masquerading as a starter. But we both were sad, too.

For mains, Chryss chose the chive gnocchi alla gratinata with morel mushrooms, snap peas, creamed spinach, and Vella mezzo secco cheese that turned out to be much more a gratin than a pasta-ish dish, as you can see. It's also a rebuke to anyone who thinks you have to have meat to eat well. 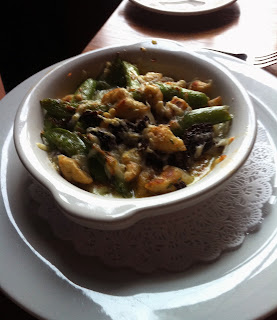 Not that that stopped me from chowing away on a hunk o' animal protein, for lookie here, I was very un-Mary like for I had a lotta lamb: a braised Niman Ranch lamb shank over mascarpone polenta, bathed in a gloriously gooey cherry and cabernet reduction, and then topped with its own salad of sorts--Point Reyes farmstead blue cheese, toasted walnut & arugula salad. The salad was completely necessary, for a mere smear of gremolata would not have offered enough balance. Nope, the peppery greens and bit of an acid tang from the dressing was absolutely needed to cut all the richness of the braised to ultimate tenderness lamb, that sauce, and the cheesed-up, soft polenta. We're talking flavors pushed to their extremes yet in fine harmony. (Although I might have cut the blue cheese--as fine as it tastes, it was one more push on the rich side of the scale, and perhaps a bit too much.) 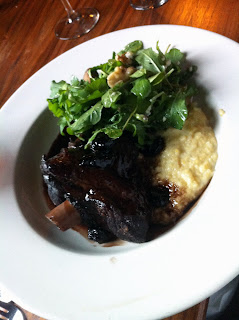 We had no room for dessert, and can you blame us. Plus there was a bit of our 2009 Breggo Pinot Noir to finish, a fitting way to set up a transition to our next two days in Anderson Valley.