I owe you many an entry, having been on vacation and then buried under the "damn, I went on vacation but my job didn't" catching up to do. Plus there's the anxiety of having 10 entries lined up to write--one for the food and drink on each day of the trip--, and the inability not to think of them all at once, instead of a day at a time, which is how they'll get written (I hope). Since, of course, I'm not on vacation anymore so that whole day-at-a-time mentality thing is long blown. But it went like this, northern CA via car (since it's still CA even if it's northern)--one night Mill Valley (to get past SF where it was Bay-to-Breakers weekend and hotel rooms were hard to find and expensive), one night Inverness, two Mendocino, two Anderson Valley, two Healdsburg, one Asilomar/Pacific Grove. So that's what you've got to look forward to as I try to look back (and see over my much larger stomach)(which no, isn't in my back)(I've messed this sentence up, haven't I?).

Hyundai does not drive on gas alone, though, so on our way from Santa Barbara to Mill Valley that first day, we got hungry and Chryss let loose her mad Yelp skillz. (The "z" bothers me too but I can't help myself.) That's how we discovered El Charrito Market (122 W. Market St.), which is actually even kind to your car, as a nearby gas station had some of the cheapest prices we encountered on the trip. It's one of those family-owned, been around forever--since the Bicentennial, which was, like, a different century and all--store as much as restaurant, especially since everything is to-go. Expect very fair prices, sizes big but not all-roided-up like so many places specializing in burritos (not that they don't do other things but a plate of enchiladas in even a parked car sounds like a mess waiting to lappen, and that's not a typo), and taste you can only get by doing everything from scratch. These beans do not hail from a can from Costsco-ito. The chile verde in particular, on a trip full of great pork, stands out, succulent chunks of shoulder in a rich sauce. I'd never thought anything would make me want to live near Salinas.

Two quick, non-food side-notes: The best way to make a 6 hour car trip bearable is to get to walk in Muir Woods at the end of it. As for lodging in Mill Valley, the Acqua Hotel is affordable-ish, offers soaking tubs, is amazingly quiet as it's in the shadow of the 101 (but it's back side, which all the rooms face, looks over a lovely estuary towards Mt. Tamalpais), and chic.

For dinner we took the short drive to Larkspur to check out Picco, which recently made the Chronicle's top 100 restaurants issue, so we figured that had to mean something, getting the paper across the Bay and all. We'd never been to Larkspur before, and while the downtown is charming, it also seemed to be the town where everyone you ever disliked in high school moved to when they grew up--somehow most of the population we passed evinced an ex-jock nouveau richness. Larkspurned, perhaps?

That doesn't take anything away from the fine meal we had. It got off to a bit of a rocky start as the very lively restaurant had no one at the host station when we walked in and the servers all seemed too busy to do that polite "someone will be right with you" thing--I said to Chryss, "If this were restaurant wars they'd be so busted." Then the hostess showed and seemed annoyed she had her job to do, telling us our table would be ready in a minute quite unsmilingly. This wouldn't have seemed too bad if she didn't chat up the table next to us--clearly regulars, and poster children for the Larkspur smugs--later in the evening. Oh well.

Fine food and cocktails smooth a lot of tepid service. This place is serious enough to barrel age its own cocktails, and a Manhattan out-of-barrel is as smooth and rounded as a baby's bottom, if the baby were made of oak. Chryss adored her Agent Zero Zero, the epitome of the salad-in-a-cocktail she so likes with its Square One cucumber vodka, lime, basil, cilantro, and cane syrup all perfectly balanced.

The food supposedly comes small plates although the prices and the classic apps to the top, entrees to the bottom menu design hint even Picco doesn't believe that. We kicked off with a special hamachi crudo that sat in what seemed too much juice, but a surprising amount of it was oil, not just vinegar or citrus. Somehow the extra oil made the fattiness of the fish extra luscious, and then that contrasted with the zip of pepper and micro green. 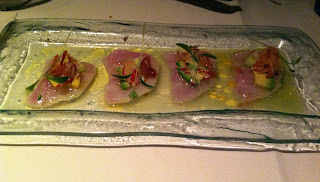 It seems they relish in making odd things like that work, for we also thoroughly enjoyed avocado bruschetta, the just-ripe avocado slices on some very hearty toasted bread topped with Manodori balsamic and sea salt. Between the acid atop and the hot bread a-bottom, the avocado sort of, well, not cooks but melts. Usually cooked avocado is something like putting water in a martini, but this dish offered something delightfully new.

The choices were hard so we skipped the chance for the place's famed risotto and instead went with grilled artichoke agnolotti, with ricotta, spinach pasta, fava beans, Calabrian chili, and basil as that seemed so California and so spring. It was. There was a grilled prawn dish with a succulent broth over some  Israeli couscous, the prawns deftly grilled yet still tender on the inside--they have flash grilling down.

And then there was dessert, and talk about things that shouldn't work: the waitress (who was much better than the hostess) described part of it as "upscale Cap'n Crunch." And that nails what was strewn on the plate along with what could have been more caramel (five of the most redundant words in food writing?) all supporting the star--a corn ice cream cookie. There's that old New Yorker cartoon of people approaching an ice cream stand that has 3 flavors listed--vanilla, corn, and wood--and the vendor tells them, "We're out of vanilla," but the joke doesn't work at Picco. Obviously corn has a creaminess, and freezing it with actual cream and sugar (probably not much extra added, for this was far from sweet) can only make it better (of course you strain all the pulp out). The cookie itself also had cornmeal as its backbone, and add all that up you get one of the more intriguing and yummy desserts I've had in a long time. Who knows what Picco could do with wood? 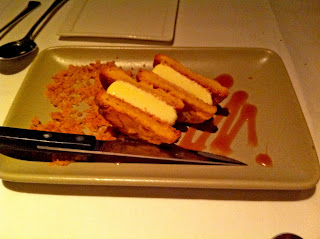