Enough oysters--let's get meaty! Or that will be my theme for this day (the third of the trip), as we'll get to in a bit. First there's a quick breakfast at Blackbird down the street from the motel, a cute coffee shop with a not-particularly-cheery clerk but good lattes, an indescribably gooey sticky bun that comes from Bovine Bakery in Pt. Reyes Station (great baked goods, but that's got to be the worst name--"eat here and become a cow!"). The photos on display are impressive, too, very much Walker Evans-esque black-and-white shots of the same people in the same poses and settings years apart. It seems an easy cliche, capturing time on the move like this, but the portraits are all gorgeous.

As is our drive, up and up the Sonoma and eventually Mendocino coasts. There's a quick stop to see the church in Bodega Bay, luckily free of birds, a peek at Land's End in Jenner, to watch the Russian River pour into the Pacific, and a lot of thinking about Denis Johnson's wonderful, twisted gothic Already Dead, which describes this coast so well. We also stop at Fort Ross, as a bit of a walk mid roadtrip is always welcome and the place seems so odd: what did they need to fight off then--nobody is here now. Just to show we took pictures of things other than food, here's one of my favorites from Fort Ross: 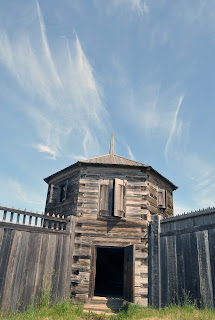 Now the dress up kids camp that was occupying the other end of the fort in their faux Russian colonial wear didn't offer us any of their rations, so we got back to the car and kept heading north, through Sea Ranch, the most branded community in America it seems (especially given its paradisaical location), to Gualala and a Yelp-aided chosen place called Bones Roadhouse, that offers Texas-style wood pit barbecue...with a view of the Pacific. There's also several Lagunitas beers on tap so the food almost doesn't matter. It ends up fine, the slow smoked Memphis pulled pork I have is deeply flavorful and tender and of the two squeeze bottle BBQ sauce choices, the mild is actually better--more range of flavor than just hot. The mac 'n' cheese side is a bit too soft, but we'll make up for that with an amazing mac 'n' cheese in a few days. 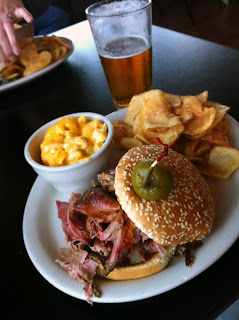 Full, we head north, with a brief stop at the Point Arena lighthouse as we seem to be collecting those. (It is worthy, if nothing else than for the view, and the bit of a charge being 115 feet up in the air in the replacement for a lighthouse that the 1906 earthquake toppled.) Our goal is Mendocino, where we have a great TravelZoo deal to stay at the MacCallum House Inn for two nights. I'll get to the food there in a bit, but I want to comment on one clever thing they do--each guest gets a $7 credit wooden poker chip to use each night in the bar or restaurant. Of course you never spend just $7, so it's a shrewd loss leader.

For dinner this night, however, we drive even further north, to the town of Fort Bragg, working hard to be something as the timber industry about it went elsewhere. It's also the home of North Coast Brewing, and their Tap Room and Grill, not-quite-gruesomely located in an old funeral home, where we plan to have dinner and drink beer. And not just ant beer, for North Coast is home to one of my all-time favorites, Old Rasputin Russian Imperial Stout. If you've never had this beer on tap, you've never had it, and if you've never had it at the brewery, you've never had it as good as it gets. Creamy on the mouth, bread and hops on the nose, and then that deep complexity of bittersweet chocolate and coffee and toffee followed by more hops than you might expect in a malt-monster like this one (it is 75 IBUs). One time when a friend tasted and it simply said, "It's sweet," I almost punched him. Luckily he wasn't there that night.

As for food, Chryss was perfectly happy with her mussels and frites, even if it was a bit of a miserly portion. No doubt, they were made in some mighty good beer (oh, they had Red Seal on cask, too--making a good beer yet better). I opted for what at North Coast is something crazy expensive, the steak Diane special for $29.95.We're talking one serious slab of Brandt beef , rather indelicately but deliciously drowned in the Diane sauce, zippy with barely crushed peppercorns and warmed (but not flambéed) with brandy. 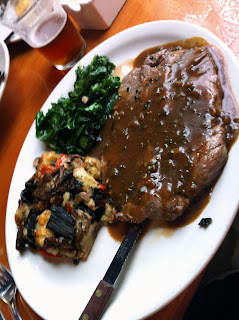 That was a lot of cow, especially given the sides would have made (as slightly larger portions), a wonderful dinner all by themselves. The braised greens were done just to the point of soft and so redolent of garlic I made sure Chryss ate some so we would both reek equally. That savory bread pudding was sort of more a stuffing, chock-full of wild mushrooms and red pepper and the bread moist on the inside but the outer edges were pleasingly crisp and crusty from time in the oven.

We skipped on dessert as we had those $7 chips burning a hole in our pockets for back at the MacCallum. There we sat in the bar area and Chryss enjoyed an Eldeflower martini--made with St. Germain Elderflower Liqueur, of course, but also Square One Cucumber Vodka, orange bitters, and sparkling wine--something light, bubbly, and lovely, while I had to have some of the best the region has to offer, a Germain Robin brandy, the Fine, which might be the bottom of their barrel, but then their barrels are so much better than most that at $8 for a very healthy few fingers of it, I couldn't say no, especially on a misty Mendocino evening alongside the hearth at the Gray Whale Bar.
Posted by George at 8:00 AM