Top of the Scallops 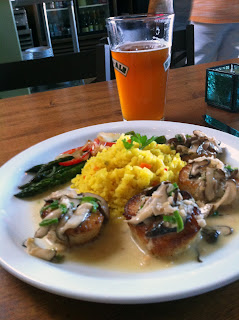 Not to go on and on about a place, but we've been totally taken with Pace food + drink, and this plate last night embodied all the restaurant does well. Those scallops are perfectly cooked, and anyone who has ever tried that at home knows how tricky that is. Sure, they have to cook fast, but you can sear them so quickly you end up with scallop sashimi in the middle. Not these. Instead they have that nice surface crisp but then are actually cooked, too, but not a bit over. They play very well with the shiitakes sliced over the top, the mushrooms' earthiness meeting the scallops' sea. The sauce is sake based, and that gives another kind of sweet, but more importantly another kind of off-sweet sweet (so unlike, say, vanilla, which however pleasant inevitably pushes a dish towards dessert).

The rest of the plate works well, too, the saffron rice bringing back childhood memories of, and this is going to sounds like a bad thing but it isn't, Rice-a-Roni, but sans the MSG, and buttered, not margarined. (I am a child of the '70s, I can't help it. At least the rice isn't stuffed into a Cornish hen.) And then the care of cooking that met the scallops also was brought to bear on the asparagus, just at the point where it's soft and not a bit stringy, and really taking on the almost-down-to-caramel onions and the red pepper flavors. Perhaps there's a bit of broth at work there, too, making sure the side dish isn't just a sideshow.

Wash it all down with a Cismontane Citizen, a California Common lager that is anything but common (thanks for re-inventing this old style, guys), and you have a perfect dinner, so much so we blew off buying stuff at the Farmers' Market as what could we do at home to compare?
Posted by George at 8:00 AM