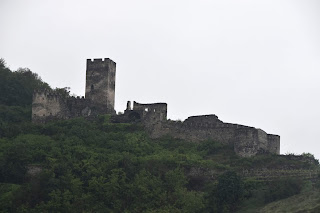 So day 8 turns out to be a lot of shipboard time, some of which is referred to as "scenic sailing," but mostly on this cruise that's a redundant phrase. The bonus is Program Director Stein is kind enough to narrate what we're seeing, so we get some history, or given the weather, mist story. But that sort of makes castles seem even more dreamy.

And while Stein was informative in a fun way, I didn't take notes, so now I look at my photos and pretty much can only ID them as "another cute village" or "umpteenth castle" or "one more 'I'd go to church if it looked that lovely' church." 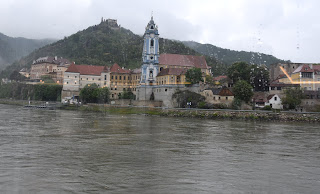 Most likely the spot above is Dürnstein, where you can go to feel the Dürn! Actually, it's best known for its ruin of a castle where a post-Crusades Richard the Lionheart was imprisoned (he made some enemies amongst his fellow Christians who turned out not satisfied just killing heathens but had to do some in-the-name-of-the-lord infighting, too), and his fellow Englishmen found him by singing outside every castle until they heard someone sing back the refrain.then they said, "Damn, of course he's atop a hill." 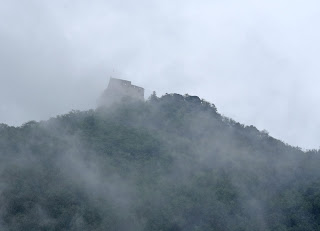 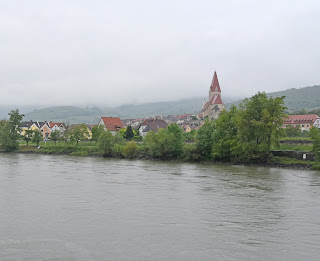 I think the town above is Spitz, if you'll swallow whatever I tell you. 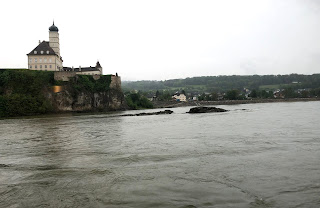 Do note some of these were taken from inside the ship, given the inclement weather, and rain and Nikons don't mix. The weird part is after so much looking at the scenic same, you start to hallucinate--tell me, do you glimpse a giant nose in this photo too? 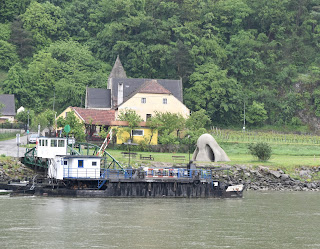 That's actually Die Wachauer Nase, and you could fit in one of its nostrils if you cared to know what it's like to be a nose hair. Who says Austrians don't have a scents of humor. Get it? I love that one website about it claims the following: "The nose likes to be looked at and photographed, and it likes for people to lean on it and to have a picnic in its shade. It is happy where it is, breathing the Danube, apricots and wine. It is a true landmark of the Wachau."

For this is the Wachau Valley, and while we don't get to stop and drink any of the famous wine, we get to stare at lots of vineyards and imagine how good the Gruner is. Note that religion tries to get between you and your drinking. 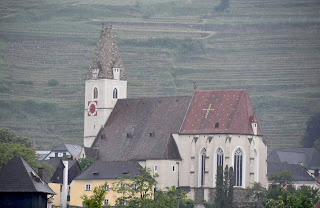 Perhaps that Gruner would go well with rabbit, which might explain this church. 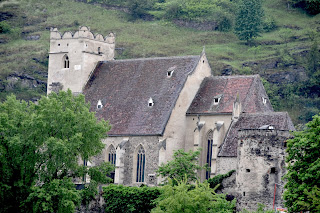 Look really closely at St. Michael's and you might be able to see there are statues of rabbits running across the middle roof line.The myth goes that real rabbits got stranded up there after a huge snowstorm and Mother Nature thought she was helping by turning them into rabbits. I guess that's in one of the Metamorphoses apocrypha or something.

Some villages still had their maypoles raised, and they were much taller and more ornate than I had previously imagined. 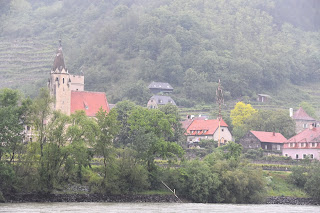 And some of the scenery was amazingly rugged and rocky. There might be a particular reason I took this photo--something mythic happened here perhaps?--but I can't figure it out. Still, nifty rocks! 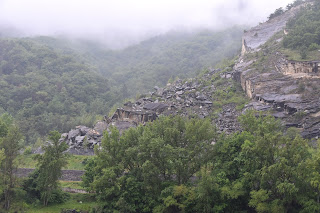 And sometimes the cute villages were coy, and a bit off the river's edge, like centuries of invaders, tourists, troubadours, Crusaders, and nose sculptors would just be too much for their poor citizens to bear. 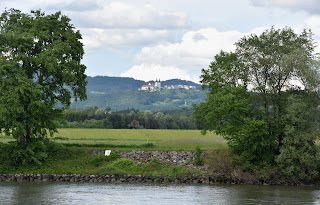 And then the Industrial Revolution said, let's build some train bridges. Note how relatively low the clearance with this bridge is. Part of that was the extra wet spring (foreshadowing!), so the river is high. The cool thing is the Tir's bridge is hydraulic, so the captain can lower it and not lose the top of the ship. It also means the promenade deck is often closed for safety, but given the weather it was hard to want to be up there anyway. We never got to play any shuffleboard. If that's a plus or a minus is for you to decide, dear reader. 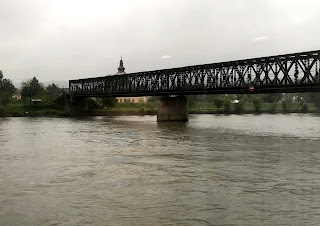 Melk It for All Its Worth

Our two-and-a-half-hours on land today is in Melk to see its famous Abbey, a Benedictine stronghold since the early 1000s. The current Abbey was constructed in the early 1700s, but has been restored much since to become a Baroque spectacle. It towers above its namesake town. 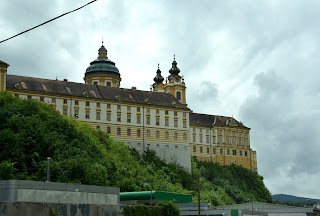 The religious know how to pick building sites for effect. We bus up from the boat to the Abbey, which is also still an active school for many young students who are flooding the entrance grounds. Going through one narrow spot one boy acts saucy and leaves his umbrella up as a way to make tourists scatter, but Roger has none of it and manages to grab the umbrella from the surprised bratty child. A thrilled murmur runs through the children as Roger keeps walking the other way, finally tossing the umbrella to the ground away from any eyes it might poke out. Take that, Austrian children! Aren't you just supposed to perform a goofy goodnight dance number for us? 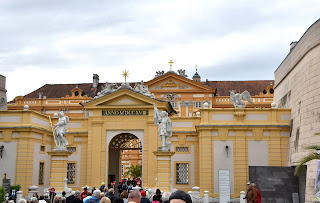 Spot narrow entrance above. Turns out you can't take any photos, even without flash, in the Abbey proper, which starts with some pretty interesting historical displays--be-jemmed holy foofery (isn't that the official term for priestly costumes?), some cool art from then and now--but ends up in two spectacular rooms. The first is the Marble Hall, all arted up with a ceiling fresco and everything you learned Baroque was from Barry Lyndon. The second is the Library, which is still a lending source for religious scholars. Indeed, some of the renovation of the Abbey was paid for by selling a Gutenberg Bible. They still have over 20,000 books including 750 incunabula, which is not only printed works before 1500 but also one of the coolest words ever. I wish I had had a son and could have name him Incunabula. If you want to see interior shots, check out the Melk Abbey website.

You do get to go outside some and so here's the front of the abbey church up close, not hinting at all of the grandeur inside (go check out that website!). 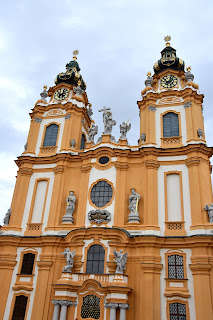 And then the views down to Melk village and across the Danube could make one have a religious experience on their own. 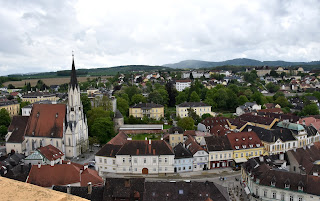 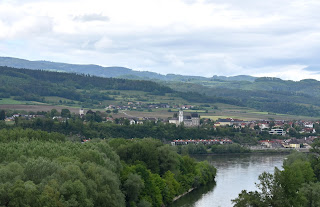 We were able to opt to walk back to the ship--about a 20 minute jaunt downhill--alas not enough time to check out any of the cute town that I was sure had amazing Wachau Valley wines I needed to buy and consume on the rest of the cruise. Next time. Watchout Wachau! 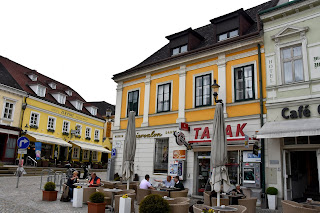 It was a busy day for Stein, given we were on the ship so much he had to figure out ways to keep us all pre-occupied. There was the morning's narrated sailing, then he helped organize all the tours so we end up in our correct groups with our local guides (he has this ability to be everywhere at once, as if there's a secret Stein twin helping out). In the afternoon he hosted a Powerpoint talk on canals and locks, which really had its ups and downs (pa-dum-bum), and after dinner he hosted a trivia night where the big prize is, as he artfully put it, "A free cruise.......brochure." We play and do ok but don't win, and have clearly drunk too much as we miss the trick question, "Now think carefully, how many pairs of each animal did Moses take with him on the Ark?" Think of it as the first cruise.

Then there was food, of course, but I'll just focus on dinner that kicked off with a cream of white asparagus soup. We don't eat enough white asparagus in the US. This delight was one of our favorite things to have all trip, actually, even if it doesn't look like much in a photograph. 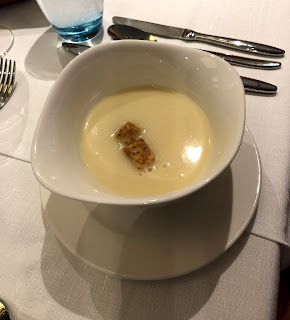 The other first choice was a crispy vegetable salad, as salad should crunch. Note the un-advertised apples in there, too. We don't put enough fruit in our salads in the US. We do use plenty of feta, though. 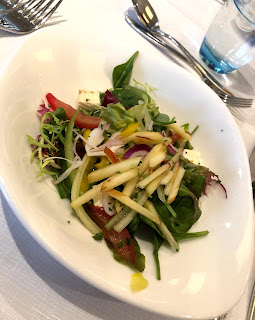 For our mains I go with the regional specialty, Krustenbraten, which more than lives up to its name. Heck, that's crustier than I'm going to be as a 70 year old. 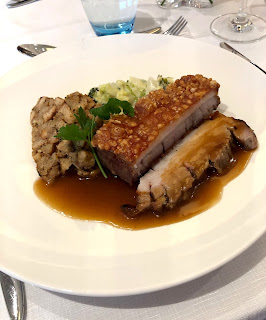 Truly something that gave your teeth a bit of a workout, but it contrasted very well with the softer pork underneath. Think of it as crackling with a capital crack. It's awash in a beer sauce, so what more could one want? OK, maybe the contrasting, acidic creamy savoy cabbage. A hearty delight. 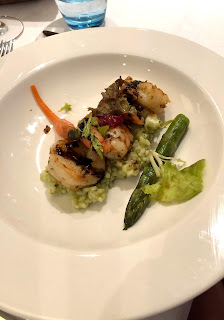 Spot the full grown asparagus cruising the baby vegetables like it was Roy Moore at an Alabama mall. That's not fair to the dish, which was delish, but I couldn't resist the joke. We couldn't resist each having a dessert and trading fours, for good desserts are like jazz. 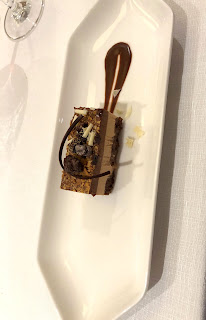 Believe it or not but that's a balsamic pear cake, with not only chocolate sauce but some chocolate layers, and a wheat crumble for texture. Complex, fruity goodness, with the smart move to zing it with some acid. 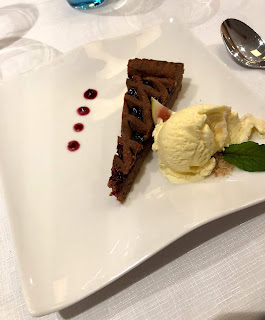 The regional specialty was Linzer torte, crumbly, buttery, currant-y. Yummy. And a la mode because it's a cruise and none of the calories count when you're floating, that's just physics. Although it's possible that it was being drunk on two desserts that made us miss Moses on the Ark.

Go ahead and read Day 9 of Ain't Europe Grand (Tour) with Chryss and George
Posted by George at 6:05 PM