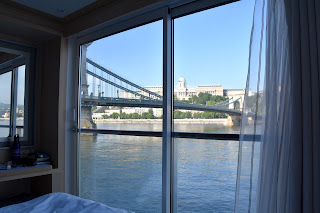 Sure, it's harder to feel you're connecting with the places you're visiting when you're eating on a ship and not in some off the beaten track find of a bistro. Sure sometimes you are spending mere hours ashore. Sure you don't get to talk to many of the "natives," as it were, beyond tour guides and shopkeepers, who have their own reasons to present their locations they way they want (to get you to tip, to get you to buy). But, your "hotel," which moves with you every night so you don't have to pack up (unless...well, we'll get there), sits in the middle of many of the most wonderful places. So, perhaps, you can rest on your bed and have the photo above be your view. Such Viking magic might be one of the reasons we were as much entranced by Budapest as any of our stops.

Panoramic, if a Bit Too Much by Bus, Budapest

We take the included shore excursion this morning to get a good overview, pun intended, as you shall see. The first third of the tour is mostly just busing about Pest, past sites like the House of Terror, an unassuming facade that hides the rooms where both the Nazi and Soviet occupiers performed many of their worst deeds on the local populace. Brutality seems so banal sometimes.

But then there's happier things, too, like Heroes Square and the art museums that flank it, including the Hall of Art that had some David Lynch show going on we didn't get to see, alas. We don't even get out to walk around, it's all just the bus doing loops around a grand square. (Spot the photographer's reflection in the bus window.) 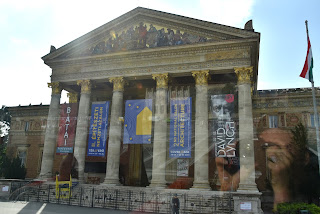 And then the outside of the permanent circus (no, we didn't transport to DC and the White House silly). 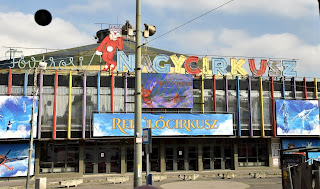 Much more dramatically, there was the Great Synagogue, which made it through World War II somehow, and is the largest synagogue in Europe. I only wish we could have toured the interior. 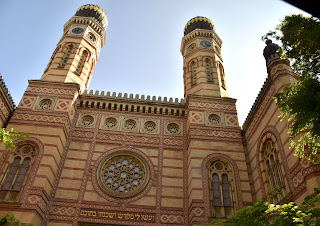 We crossed the Danube into Buda, and riverside got this great view back across the Chain Bridge, with its lions in all their regal glory. 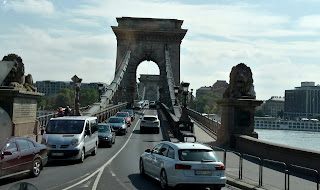 Here's the view almost exactly the other way, towards the Fishermen's Bastion and Matyas Church (we'll be up there soon). You can't have a bad view no matter where you look, that's Budapest. 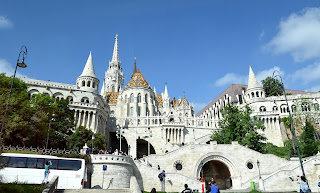 The bus drivers, winding through the narrow streets as smoothly if they were driving bikes down boulevards, drop us all off at the hilltop so we can do more touring by foot. We still don't get to see everything that interests a weirdo like me, including this Houdini Museum that reminds me his name was Ehrich Weiss originally, his dad was a rabbi, and he was born in Hungary.

We do get to get much closer to very old buildings--if I recall properly, this is 15th century or so, just like most of the houses in California. (We had two earthquakes in two days last week. That anything stands here for long is incredible.) 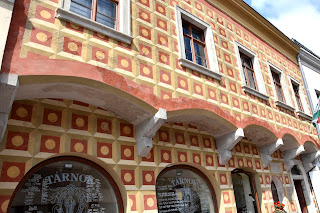 There's even a museum that spells itself mvsevm, as if it had been reading my poems. If you haven't, The First Night We Thought the World Would End is available at SB bookstores and on Amazon. 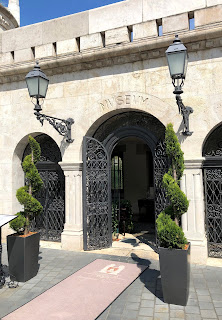 We do get to tour inside Matyas Church, one of those buildings with a wild history, from being converted to a mosque by occupying Turks to having its roof destroyed in WW II...and not restored for several decades. But my god it's beautiful. Or maybe I should say everyone's god. Gothic on the outside, but then gussied up the most in the late 1800s, so there's lots of Art Nouveau, and then the more modern, checkered roof that looks old. Quite a place. 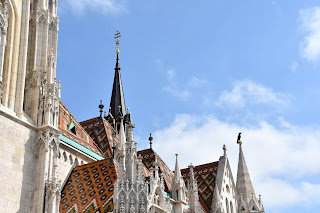 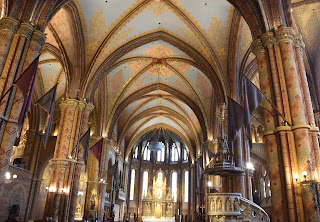 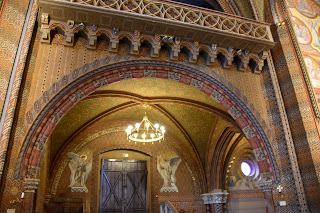 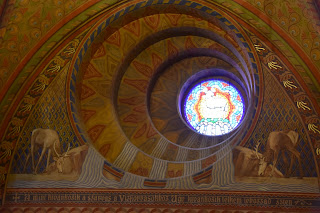 To top it off (haha), there's the view from the Romanesque Fishermen's Bastion, all up and down the Danube. Which, alas, is not blue. Sort of muddy and quick. Not in waltz time at all. 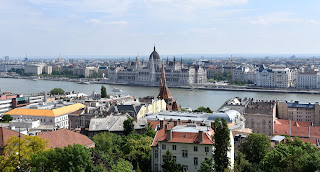 That afternoon we get to do something probably no one else on this Viking cruise (or maybe any?) has done--meet up with a friend I did radio with back in the early 1980s. This is not part of any tour. I knew Steve Stec in Baltimore in our WJHU days, and at best we'd last seen each other when I got to Baltimore semi-frequently in the late 80s when I lived in Pennsy. He's been in Europe for some time, working at Central European University, consulting on environmental law all over the globe, doing cool things. And marrying the very lovely and kind Izabella, who ends up chauffeuring Chryss and I back and forth from Budapest to their home in Szentendre, about 22 km away, but that's suburban slow driving. And we sort of invited ourselves to her house without notice, too. Thank you for your kindness and patience and graciousness, Izabella!

It was a relaxing afternoon getting to catch up 20+ years at the Barati Stec house on a scenic hillside looking back towards the Danube. Plus both good wine and elderflower syrup infused water from their own trees. How nice not only to meet again but also to get to see a bit of what it's like to live someplace and not just cruise through it. 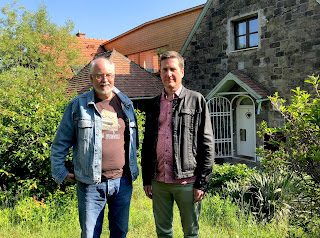 Note I haven't mentioned food yet, as I've decided it deserves its own little section. All the chowing down we did was on the boat except for a quick coffee-pastry break near Buda castle on the walking tour. Don't assume we're just lazy, though, for the food on the boat consistently pleased. For instance, pretty much any morning at breakfast you had, as just one of your options, little fish plates like these you could enjoy. 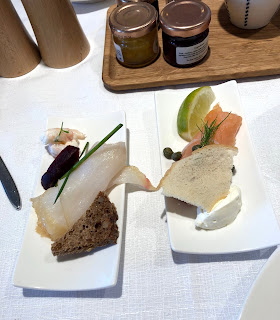 And then lunch there was always some pasta a chef would serve for you along with a buffet line of different delights, like this day's salad laced with duck confit (good, but I was stilled ruined for duck after Prague's perfection), there close to the Bitburg, which was the house beer btw. 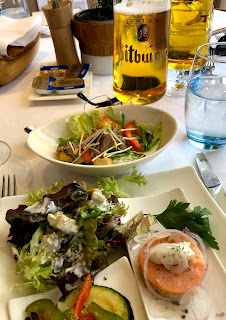 Dinner meant another chance to sample the regional specialties, but also discovering one of the Tir's specialties was soup. Like this wild mushroom one with truffle cream to up the umami. 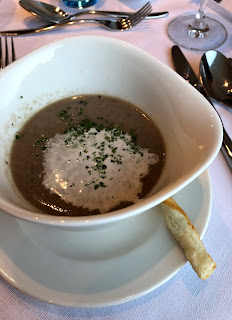 Then when in Hungary, one must goulash, no? So I did, the sauce piquant with paprika, the meat succulent and neither soggy nor overdone, always a danger with something like this cooked in sauce. That Israeli couscous style pasta they called tarhonya was a different, elegant touch, too. And who doesn't want a pickle on every dish. Seriously. 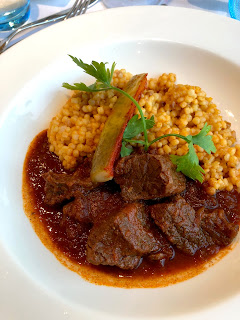 Chryss got to go full veggie for her choice, with a warming, pleasing warm potato and goat cheese tian in some hearty and rustic tomato sauce. 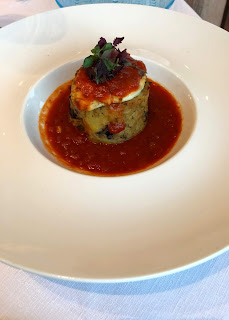 Then dessert was the somewhat puzzlingly named Somlói Galuska, given galuska means dumpling, and while this is a bit of a rolled ball, it's really a trifle, originally from around the town of Somlo. Think a mix of different sponge cakes--plain, walnut, chocolate--and then chocolate drizzled atop with some whipped cream. Lighter than you'd think (definitely not a dumpling) and crazy tasty. 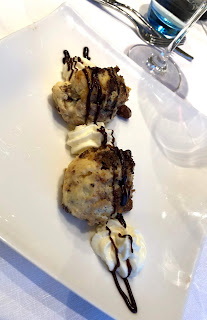 There was a Toast to Our Guests prior to dinner, complete with trays of sparkling wine and kir royales to imbibe as our fearless crew got introduced to us, especially Captain Rudy and Hotel Manager Claudia. While the passengers never have to dress up, the crew certainly liked to put on their full uniforms for ceremonies like these. 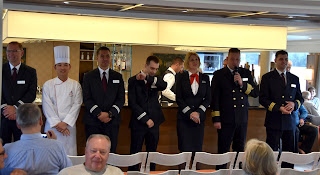 We sailed off at about 6 pm--thanks to Izabella for risking city traffic and getting us back to the boat on time!--which meant lots of lovely views for the rest of the evening, only a few of which I'll bore you with here in photo form. It really was sort of pinch-me stunning most of the time from the ship, as the views kept changing, too, and were rarely blighted and industrial. More likely they'd be some village that looked like a Hollywood set 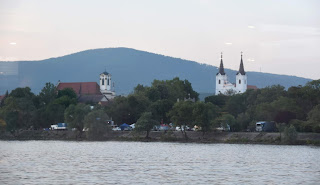 or a sunset over more trees than we thought we'd see riverside. Lots of the banks were unpopulated and dramatically green green green, as befits a place where it actually rains. 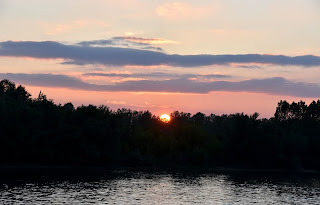 And then it was worth going to the top open deck, where I got this panoramic shot of the ship, the Danube, the moon.

Go ahead and read Day 6 of Ain't Europe Grand (Tour)