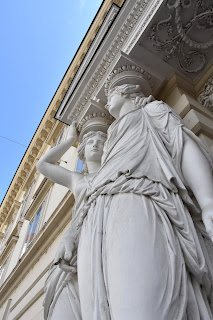 Heavy is the head that supports the cornice. At least that's what's easy to surmise looking at the columns above, just one of the numerous grace notes in Vienna, a city full of architectural and sartorial elegance. Even with all its history, it seemed the most of the now of the three big cities we'd hit so far; it's got the most people, too, for what that's worth. Seemed the most spread out. The best to visit and not to live in is my took quick take--just your fashion budget would have to be huge.

This morning for our included tour we get to subway into Innere Stadt, so that makes us feel like pros even if we've got a tour guide shepherding us along. Before we get to the subway we do pass a dog park notable for its sign. 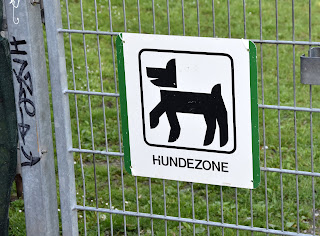 Now back home, we refer to our house as the Hundezone. Archie even sort of prances like that dog, if you thinned the one on the sign out quite a bit. We got out right at the Staatsoper, which looks pretty cool to us despite Emperor Franz Joseph hating it so much--he called it a railway station--to the point it drove the building's architect to suicide. Everybody's a critic. 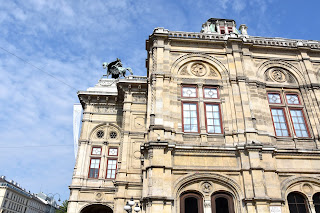 Seems impressively Neo-Renaissance to me. We didn't get inside, but we did get to see a horde of fake Mozart's shilling tickets for classical music concerts, which was interesting. Across the street was this definitely touristy scene, with the odd wing of the Albertina Museum looking like a plane landed. 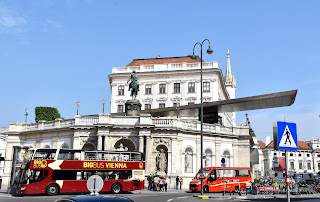 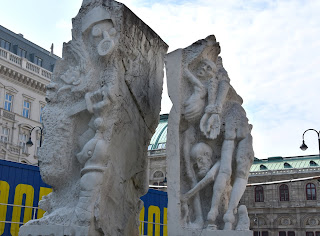 which perhaps we need to make a copy of and put on the White House lawn for somebody to contemplate. Disturbing, as it should be--there's one part where the stone is wrapped in barbed wire--but it does also include on a different stone the Proclamation of the Second Austrian Republic, that is the post-free-of-the-Nazis end of WW II statement, so there's light after the dark. (Let's hope it doesn't get that dark.) Very powerful monument.

Next up was Josefsplatz with Emperor Joseph II all bedecked on his equestrian statue like he's a Roman as the Habsburgs liked to take the long view of things and lineage is important when you want to be empiric. That's all Hofburg Palace back there, btw; in this section of Vienna you can't throw a knodel without hitting the palace (which is still where the president of Austria lives). 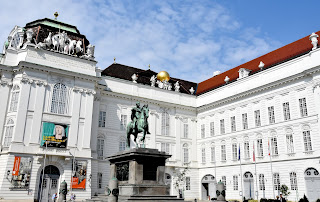 Here's St. Michael's wing of the palace. Yes, this is a wing. 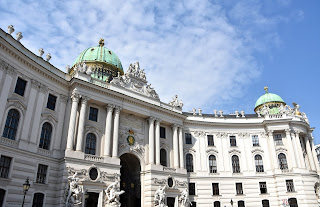 And right across from that is the Spanish Riding School, home to the famous Lipizzaner stallions. We could just manage some paparazzi shots of them in their stables fit for, well, royal horses. 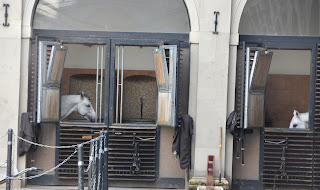 A lot of my Vienna photos are simply "heck, that looks cool" shots and not anything particularly historic. But so much of Vienna is cool. All the Secessionist stuff fascinates me, even if in this case it's just hiding what's a drugstore if you think about it. 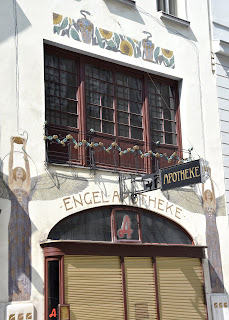 Or there's this building in the sun. Which sadly didn't last (the sun that is). There's a reason I carry a plastic bag with me in my camera duffel. 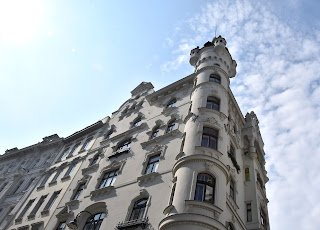 One of the most intriguing stops was near the Anker Uhr Clock, improbably built as WW I raged, but still a monument to time and Art Nouveau. We weren't there to see its figures march, but it's stunning anyway. 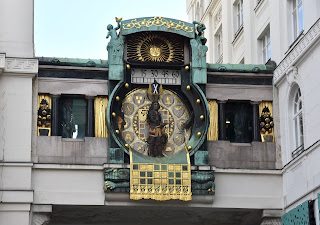 We were dismissed from the tour and left to our own devices, which meant we needed food after all our walking. Luckily we were right near the Sacher Hotel, so when in Vienna.... We got to eat upstairs in the tea room, a spot all luxe red and chandeliered. And then the sachertorte itself was delightful, the chocolate bittersweet, the cake light and moist. 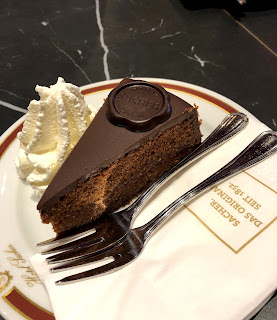 They could easily just ride on their laurels--I mean, wouldn't you if a famous dessert was named after you?--but it was pretty special. We had to do some penance after our gluttony, and luckily we were right near Stephansdom. 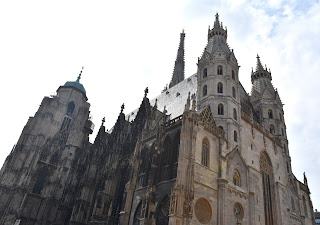 St. Stephen's, like most European cathedrals, has yet another centuries-long, complicated backstory most recently being rebuilt after WW II bombings, but 450 feet of Gothic spire gets your attention. It's also impressive inside, especially a temporary art exhibit you can sort of see in this photo, "Sky of Stones." That's not what you want your sky full of, especially inside a building. Still kind of cool, though. 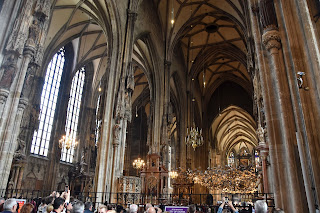 And I could share a whole bunch of interior details, overwrought in the way that people hoping to praise/appease their mighty god are wont to do. 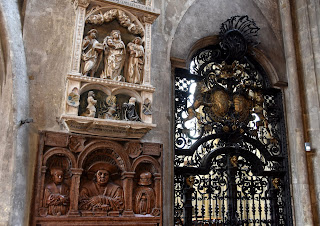 Continuing on our own, we decide to hoof it to the Belvedere, originally built by Prince Eugene of Savoy. As a summer residence. Because you can't have too many palaces, I guess. Turns out it's a bit more uphill to the Belvedere than we might have wanted but we get to see embassy row, as usual an intriguing view. Not that any of the embassies has anything on the Belvedere, and we only go to the Lower Belvedere, which is less elaborate but holds the art museum. 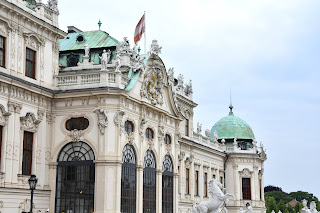 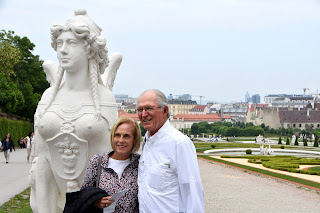 Like everyone else at the museum, we most want to see the wing housing the exhibit "Vienna around 1900," for there one finds Klimt and friends, including the famous "Kiss." I took a photo of that, sure, because you have to or forfeit your camera upon leaving, but I found these flowers of Klimt's fascinating, too, so thought I'd share something you didn't see on too many t-shirts. 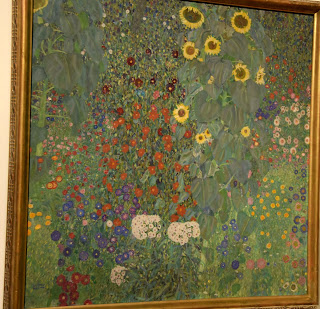 There's also Egon Schiele's work, like this one that seems both simple and brilliant, if you ask me, realistic yet a math problem, the hope of 20th century and its crumbling all at once. 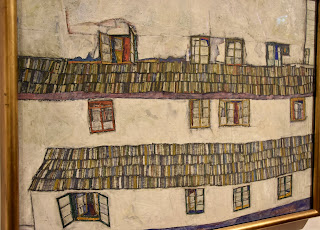 It's a wonderful wing of work, with Monet and Oskar Kokoschka and Richard Gerstl and enough Klimt to save him from the gold-leaf cliche he's kind of become. Even better, it's just enough art, so you don't get tired of it. It left us wanting more so we even moved on to the religious portion of the program and found another St. Barbs! Fun to see the three windows vertically and not horizontally. 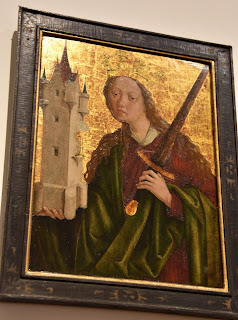 And then I have to share this one of dear blurry Chryss walking into a room with an amazing vase that has to fight the very walls and ceiling its displayed amidst. Color explosion! 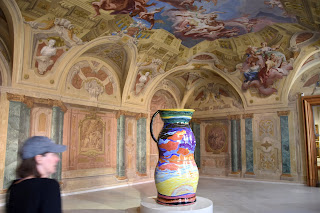 We manage to subway back to the ship all on our own not getting lost or anything--it helps we don't have to transfer lines. Pre-dinner we hit the lounge to hear Alexander Kugler give a talk called "Austria--The Heart of Europe," which is quite a riches to rags to riches story, complete with Powerpoint and maps. Who says you can't learn on a cruise? It doesn't hurt you get to enjoy a martini along with the talk, plus the delightful little treat dish they give to you at happy hour on the Tir, with both wasabi nuts and a sort of bbq nut that were hard to stop devouring.

Dinner began with the worst salad I've ever had. Oh, wait, make that a wurstsalat--see, there's ham in there, plus Emmenthal cheese, marinated cucumbers, tomatoes, greens. Sort of a ham and cheese sandwich without the bread, so better for you. Certainly, saltily delicious. 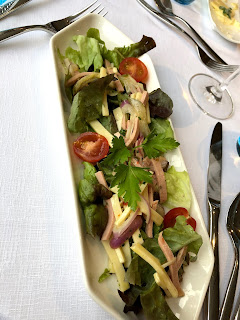 For a main I couldn't bring myself to do that night's regional specialty, listed as "warm braised leeks." I mean, I like leeks as much as anybody, but they don't seem like an entree to me. So instead I went for the seared king dorado with seafood fregola sarda--kind of a call back to our lovely Prague evening at Ichnusa. Fine crispy skinned fish with a bright lemon olive oil dressing on it all. That works. 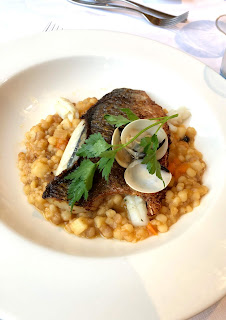 Especially with a glass of one of the night's featured wines. I tried mostly just to drink the house wine, which was very good and already included, but you know me, I have to check some of the other stuff out, too. So I ordered the Kollwentz Chardonnay, having had few chards from Austria. A perfect match for the fish, with good acid grip and citrus-white peach flavors and some spice. 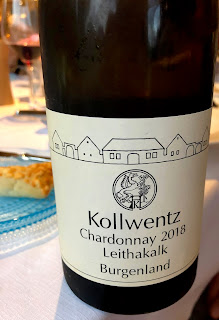 The regional menu dessert was sacher cake, of all things, and having had it from the Lipizzaner's mouth, as the Viennese might say, I had to make a different choice. Luckily there was also a layered wine gateau with red wine butter ice cream. 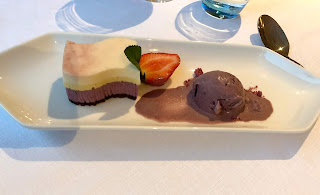 It tasted even better than it looked, complex but soothing all at once.

And if you were wondering what you do on a river cruise after dinner...we could have pushed things and hit Vienna one last time as the ship didn't leave dock until 11:55 pm, but we had had our fill, and most days start pretty early; our shore excursion that day had kicked off at 9 am. So instead we just remained in the lounge listening to the stylings of Rafaela and Ante, a duo that performed lots of things to make a boat full of people average-aged 70 feel nostalgic. Rafaela had one of those perfect pitch voices to croon oldies, and their subtle drum machine let people dance a bit. Perhaps, thanks to some liquid encouragement from our good friend Harris behind the bar, we danced a bit too.

And here's the evening view out over the Danube. 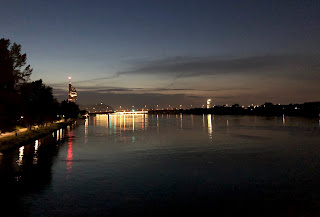 Go ahead and read day 8 of Ain't Europe Grand (Tour) with Chryss and George
Posted by George at 12:04 PM