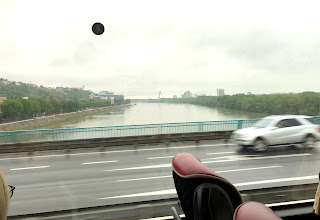 Not the most scenic shot, out a bus on a crummy weather morning, but that's our first view of the Danube with Bratislava in the bridge distance (we'll see that bridge again soon from a very different perspective). For today is on the road and then at last on the boat day. Viking does a great job of getting luxury buses--the seats don't just recline, they push out a bit side-to-side--so it's about as comfy as bus time can be. You even get a tour guide just for travel, so they keep you up-to-date with the schedule and the sites. 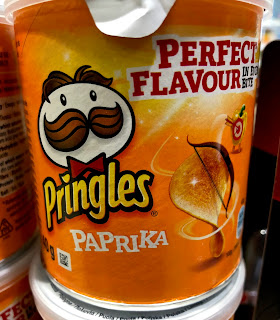 There might have been chocolate, too, the kind over wafers that I also somehow recall from my childhood, but did distant Slovak relatives really ship candy our way, to the land of sugar, the USA? My memory isn't the best. We drive two more hours to stop for lunch, now in Hungary--we just drive through Slovakia, land of my peoples, as if it were Delaware and you were a Jersey boy with Maryland on your mind. It's quick. So our stop is alongside the freeway in Hungary, what would be a truck stop in the the States, but going through the salad bar portion of the stop, I end up with a plate that looks like this: 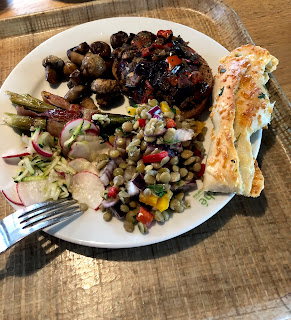 Sometimes traveling makes you want to move, no? Two more hours and we have arrived. 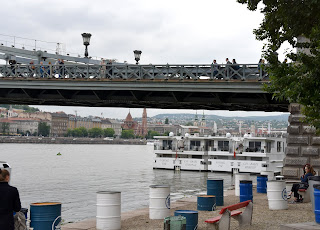 That's the first glimpse of our ship the Tir (sorry for the pun), and it's sitting in a perfect berth right below one of Budapest's scenic sites, the Chain Bridge. Oh, did you know that Budapest is sort of a Minneapolis-St. Paul that decided, "Hey, our names are short, let's be one city?" Buda is the hilly historic side (across the river from our boat), while we're officially Pests (sorrier for the pun), in the more modern flat side. Of course everywhere modern and older mix like crazy, so that's an over-generalization, but how many words do you really want this blog to be? Still, plenty of chances to glimpse architectures like this side-by-side. 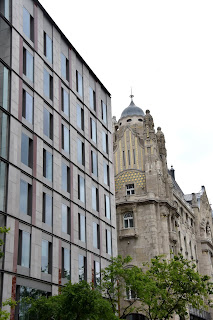 Or there's this juxtaposition, the joy of a gorgeous lamp and an eye to keep track of you watching said lamp. 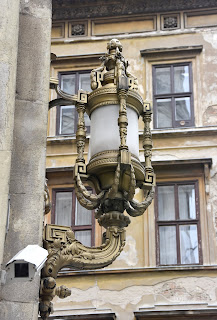 Roger, Chryss and I head out for a bit of a sight-see prior to dinner, and take the obligatory selfie to prove it. 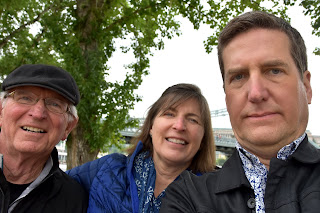 The boat is docked very close to Váci utca, Budapest's main business thoroughfare, so much of it is pedestrian mall. As pedestrians, we're all for it. You get to take in a lot of Art Nouveau along the way, and that's always grandiosely fine by me. 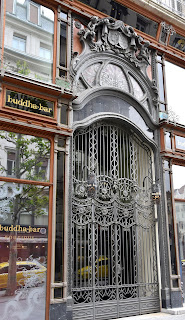 Once again, even the manhole covers are works of art. Once again I cause pedestrian traffic back-ups. Sorry you made your places to walk so darn pretty, Europe! 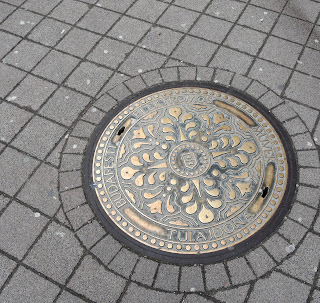 Our goal is the Central Market Hall, as we love old time markets--nothing seems to give you a sense of a place than to see the produce people produce. (I promise that sentence makes sense.) Not to mention the building itself is something--from the outside it's hard to tell if inside you will get to buy your grocery or board a train, which is fitting as it does transport you. 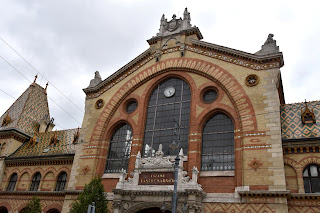 For some reason I don't really have a better interior shot than this one, mostly because I inhaled so much paprika, which is to Hungary what refrigerator magnets are to an American airport. There are a ridiculous amount of varieties beyond plain and smoked, too. Made us wish we could do some cooking. 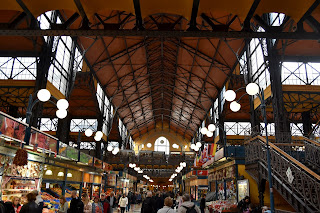 We walk back and near the end get a bit closer to the Danube, even if rails are in the way. Oh, countries with mass transit that matters! 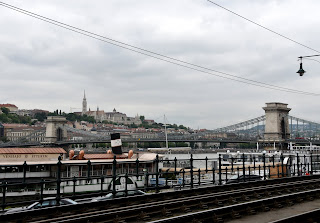 What is it about rivers and bridges that is instantly so photogenic? Perhaps because it's one of the few times we let nature be nature while we conquer nature? Simply put, nature and humans get to be at their best all at the same time. Go us.

Food Is More than Fine 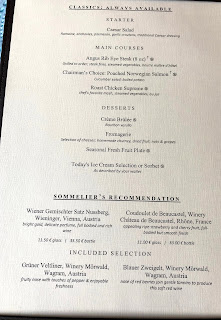 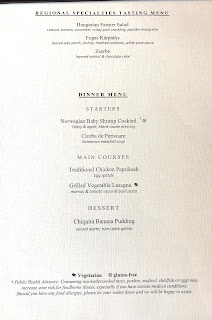 I wasn't certain what to expect from the food on the Tir. I knew Viking got good marks, but I'm also the kind of person who doesn't feel like he's visited a place until he's eaten the food there, so the idea of eating on the ship all the time had me, at the outset, pretty skeptical.

I won't try to build any suspense, though. We couldn't have been happier with what Viking fed us. Above is the full dinner menu from the first evening. As you can see, the left side is standard, so you won't see it again--stuff you could easily land on if you missed America too badly. It also features the nightly wines. Page two is where I would spend my ordering attention, though, particularly at the top as each evening there were regional specialties. Notice sometime more of these would appear in the nightly dinner menu section, too. And nothing repeated. Not a huge amount of choice, but just enough. Things even worked well every night for pescatarian Chryss, despite the menu often not giving the leaf symbol for vegetarian to actual veggie dishes. Perhaps that was just a way to show each was printed for the day at hand (and therefore not perfectly proofread)?

We would often be able to order different things and at least share tastes, so that was great, and what we did for the appetizers this first night. Chryss got that Norwegian baby shrimp cocktail, which proved the seafood would be mighty fresh (one of the joys of a river cruise is the galley can get restocked pretty much daily), with lots of good celery and apple crunch. I had the Hungarian market salad, because it didn't sound like it would work sans the crispy pork crackling, even though they were always willing to de-meat a dish if they could for Chryss. Still, when it's so straightforward, one missing item can topple a simple balance. Very tasty and fresh. Plus, salad! Green bonus points in central Europe always a plus (we even felt that way about the celery in the shrimp). 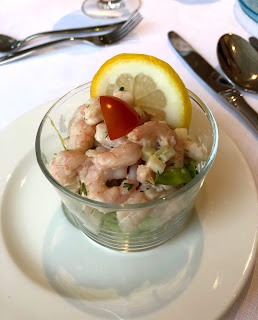 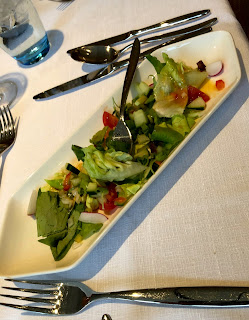 For mains, I had to have some paprikash after all that paprika at the market. Even my Slovak mom made a paprikash. This chicken dish was piquant and pleasing and even better the breast was still quite tender, something that doesn't always happen when the focus is the sauce. Those creamy spätzle were a plus, too, just enough doughy, if that makes sense. 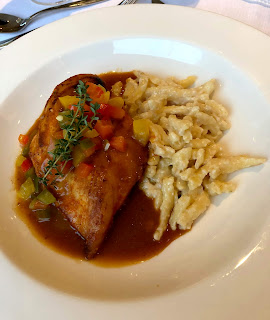 Chryss went with the fish, getting bonus shrimp in the deal but even better, a truly crispy skin on the perch. 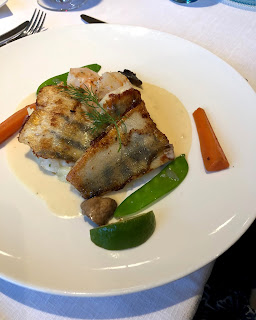 It all went very well with the Gruner Veltliner from Winery Morwald. Morwald, in the Wachau Valley of Austria, is licensed to make Viking's house wines and they do a very solid job. The Gruner was all you'd want the varietal to be, just tart and green apple-licious, a perfect foil for somewhat richer foods.

And then, of course, dessert, which would become the weight gain bane of our existence, as we don't eat it much at home and suddenly were having it for lunch and dinner. I appreciated every slight incline I had to walk on this trip, I promise. At least we often shared sweets to lessen the caloric hit a bit. Here's something called Zserbo, a layer cake that was delicious without being overly sweet. Of course there's ice cream and chocolate sauce to help. 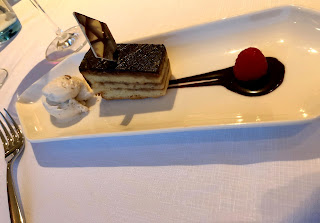 I Want To See the Bright Lights Tonight

As we finished dinner, the Tir took off on an evening Danube cruise for us, as we would be leaving the next evening too early to see the night-lit sights. That meant at first things were still just bathed in a sunset glow, like the ridiculously gorgeous Parliament building, which is Gothic in design but was built from 1885-1904. They just wanted Gothic, and can you blame them. 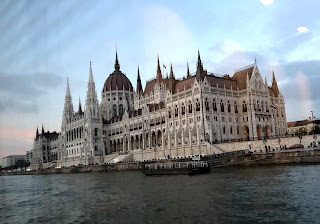 Alas, we never got inside, but that gives us a reason to go back (among many). Somehow it got dark fast, despite it being much further north than we're used to in Santa Barbara, or maybe I just edited a whole bunch of pictures or had my nose lost in Zserbo. But here's that Parliament Building all a-lit. 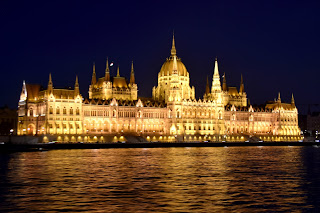 Then here's what became a sad view just a week or so after we sailed up the Danube, the Margit Bridge. It's heading under this bridge that the Viking Sigyn collided with the much smaller sight-seeing ship Mermaid, and 28 people were killed. Nothing close to that happened our night, but there certainly were a host of boats about, as how could they not be with the amazing views. Still, you don't have much room to get under these bridges if you're a long boat, so I can imagine how it went down (so to speak). 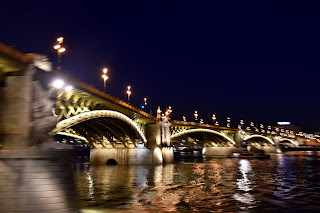 We were lucky to have a clear evening, too, if very crisp. The accident night was rain. Learn more if you care--it's an fascinating story of people wanting to make as much tourist money as possible and different levels of ships not communicating well.

But here's the Royal Palace 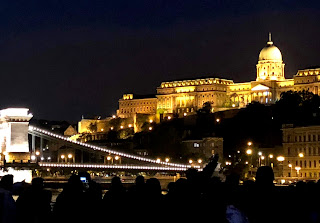 and the Elizabeth Bridge 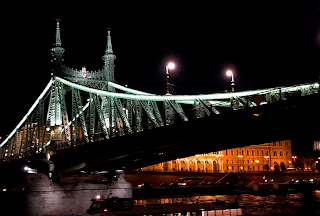 and the Museum of Contemporary Art, so, of course, neon 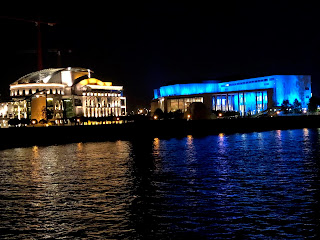 and we pulled safely if totally agog from all the beauty back into our berth under the Chain Bridge. 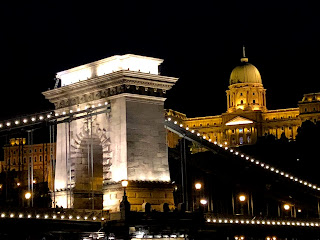 Which, if you whisked aside the curtains in our stateroom, looked like this. Very clean windows and very sweet dreams indeed. 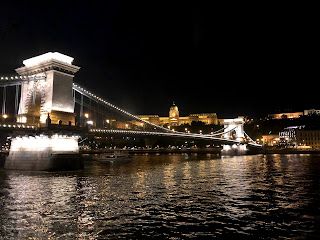 Go back to Day 3 of Ain't Europe Grand (Tour)