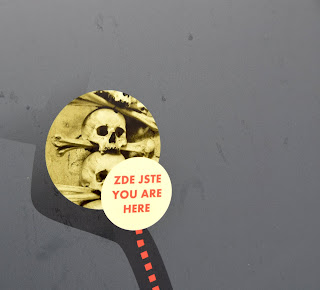 How's that for a map to put you in your place? We get to bus out with Viking to Kutna Hora, once (think 1300s) a center of silver mining and a challenger to Prague for most important Czech city, and our first stop is the infamous Sedlec Ossuary just outside town. It's a humble church but when you look inside, you discover why it's a tourist destination--it's decorated with approximately 40,000 human bones. Here's a chandelier you probably don't have in your house 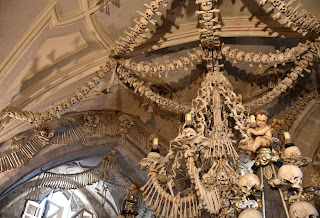 and if you do have a family crest, you probably don't display it like this one 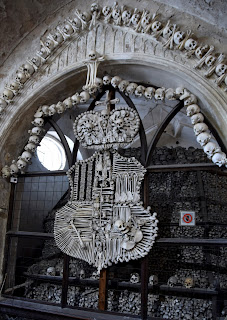 and then you might have some extra bones just lying around (Chryss poses for bones-covered-with-flesh scale). 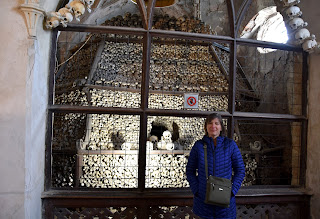 There's supposed to be some soil at Sedlec from Golgotha, brought back during the Crusades. So people wanted to be buried there, too, at the local Skull Place, so to speak. Black Death = Lots o' Bones. Then in 1870, a guy decided to get artistic with them. It's kind of a small space for all the bones in it, so you don't stay long, and even with a ten minute visit, by the end you're kind of numb(skull?). Your mind sort of insists they have to be fake. How else to deal with so much memento mori? [Cool sidelight I just discovered, the wonderful surrealist Czech stop-motion animator Jan Švankmajer, made a non-animated short film in 1970 called "L'Ossuaire."]

OK, so this picture comes from before arriving at Sedlec, but I had to lead with the bone show, didn't I? As we noticed on our flight from Frankfurt to Prague, most of the Czech countryside is blanketed yellow. We find out on the bus thanks to our fine tour guide that one of the country's major crops is canola, but they aren't growing it for cooking, it's a fuel additive. And they call it rapeseed. Well, they call it řepka olejka, but I don't think I can say that (properly). It is pretty stunning to drive by, though, even on a crummy weather day. 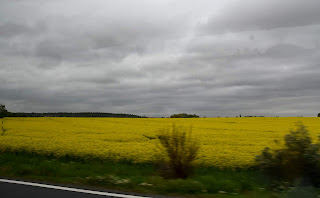 Obviously we were tickled that the major cathedral in Kutna Hora is named in honor of St. Barbara. Turns out she's the patron saint not only of lightning and gunpowder, but also of miners, too (you can sort of see how that works, no?). It's a another Gothic gem that took 500 years to finish, what with wars and silver running out and humans being poopyheads and all. You know, history. 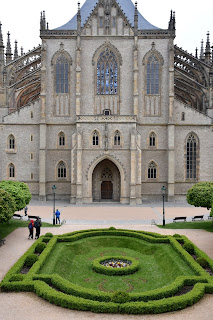 Doesn't make it any less gorgeous. Not quite as big as St. Vitus, but they stuck with the Gothic style better through the centuries, so there's that. And it has been very well restored, as you can tell espying al the family crests painted onto the crenelated ceiling, not to mention the glimpse of some grand organ pipes. 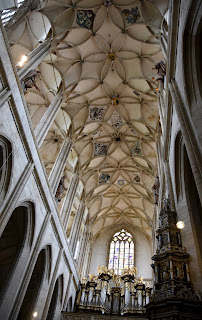 And the great stained glass, of which this is just one example. 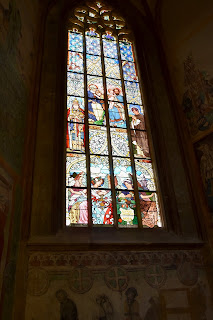 There's also a striking statue, as it's not religious at all, but it certainly reinforces who ran the town. 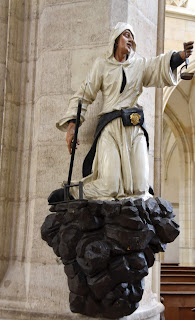 As for their St. Barbara, she sort of looks like a man in drag, but perhaps that's just because she's a saint most associated with a tower (symbol?). Note third windows (or nine, which is a bit confusing, but ok). 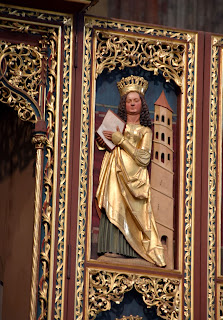 There's a statue of St. Barbara on the outside, too (Chryss poses stopping only briefly so not to freeze in place and become a statue herself). 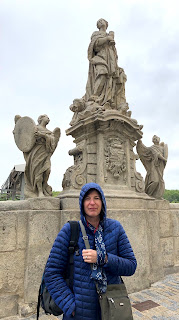 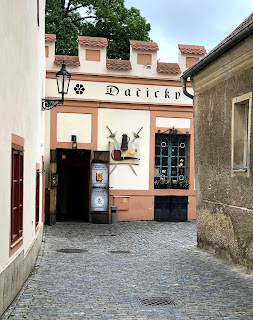 Part of the Viking tour was lunch at Dačický, the kind of place that is both quaint--it's got 400 year-old roots--and a bit of a tourist spot--busloads like us end up eating in one of its long back halls. As if knowing everyone there has been or is on the way to the Ossuary (well, I guess, aren't we all, bwahaha), the walls feature creepy art that is right up our Halloween-loving alley. 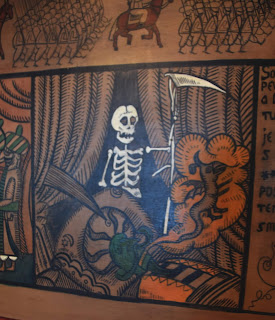 We get to warm up with bowls of Mushroom Potato Soup of the Lords of Rožmberk, so thanks all you Rožmberkians. It's very tasty--the mushrooms are definitely different here--if not so visually attractive to be worthy of a photo. But there is local lager, in both light (not lite) and dark versions, so I'm sure to try both. For reporting purposes, of course. 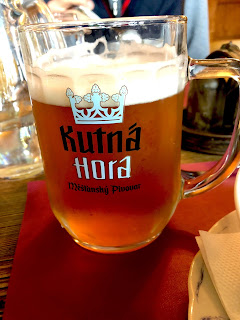 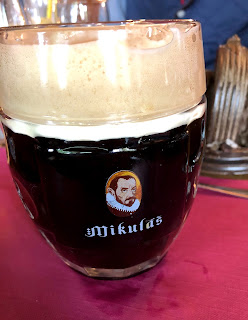 Every town has its own beer. That's charming isn't it? And we thought we invented something with microbreweries. For my main course I get the chicken in plum sauce, with enough potatoes for the table to share, except, of course, they've all got that many spuds too. It's a wonder anyone in the Czech Republic is less than 50 pounds over-weight. 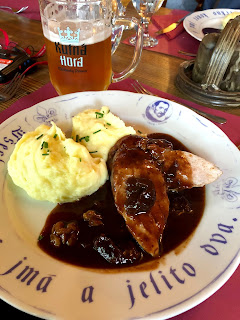 Because there's apple strudel, too, the apple sliced very very fine, mimicking the layers of the dough. So good. 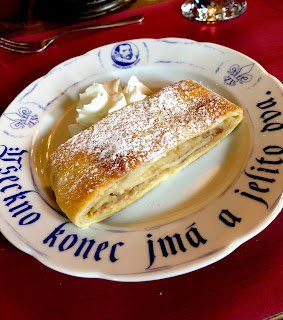 After lunch we get a whopping 15 minutes on our own to wander the cobble-stone streets of Kutna Hora. We don't wander far, as there's a wine bar just next door to our restaurant, and I power through--with some help from Chryss--a degustation of Moravian wines. 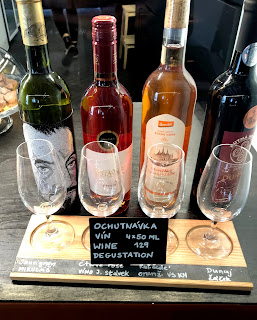 These didn't really stand out, although of all things the orange one (a pinot gris) might have been the best--certainly the most unusual.

We rest a bit once getting back to Prague and I start trying to scoop out where to have dinner, settling on Nota Bene. We get to take the Metro there--the stop is right at our hotel--so we feel extra proud figuring out some public transportation. Plus, you see a city's real peoples when you do that--here's all the young and gorgeous folks Prague is supposed to be famous for. Oddly enough, they don't hang out at the tourist spots.

The restaurant is smallish, clean and inviting, its walls covered in charming murals that almost seem like a child drew, but they're too clever for that. 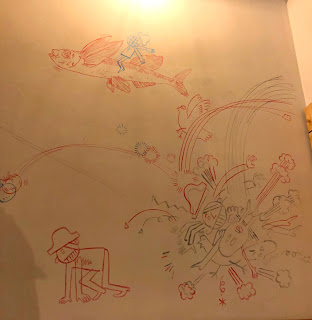 They do set up what Nota Bene does very well--pleasing simplicity that's got more going on than at first appearance. For instance we all got an amuse that was big enough to be an appetizer, a whipped white cheese adorned with pickled rhubarb, a surprising touch. 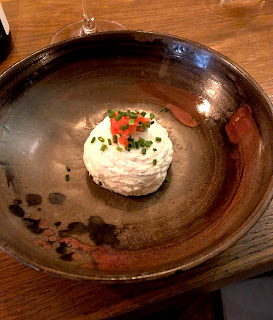 The very helpful waiter led us to a great wine selection, too, a pinot from Moravia. I had never had any pinot form Moravian but this Springer certainly got me interested in more--lovely strawberry, cherry fruit but then some more ineffable mineral-stone notes. Delicious. Even better, just about $35 a bottle. On a restaurant wine list. In the States something this good would easily be $90 a bottle. 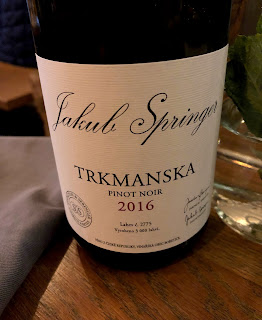 We share a smoked fish dish--carp, of all things--that comes with squash and apple, which work in ways I wouldn't have guessed. So much subtler to use apple than citrus for the fruit in a dish like this. And then a lovely green sauce not just for plating contrast but for herbal depth. Lots of layers in this plate. 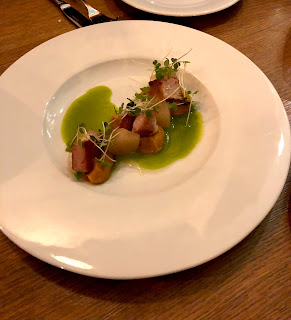 I have what is one of the best duck dishes of my life, starting with perfect execution, the skin crispy, the flesh cooked rare but definitely cooked but tender in a way duck almost never is. With it is a light potato dauphinoise, very crunchy wild broccoli and beetroot, the beet's red adding to the duck's jus for a earthy sauce. 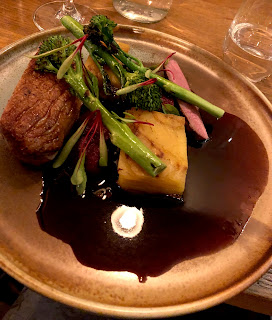 Everybody else was crazy for their dishes, too--Chryss's fish, Judy's curried veggie, Roger's big bowl featuring beef ravioli and making it clear how much Nota Bene likes to take Czech staples and elevate them (this ravioli is no mere dumpling). I like to think of it as Prague's answer to Santa Barbara's Barbareño, lovingly happy in a terrific town, but wanting to do traditions in the best, most modern, most well-sourced way.

Totally full, we still couldn't pass up sharing the sticky toffee pudding with its sour cream ice cream just the edge you need to cut the caramel and date sweetness. If Nota Bene were nearer, we'd be there a heck of a lot. 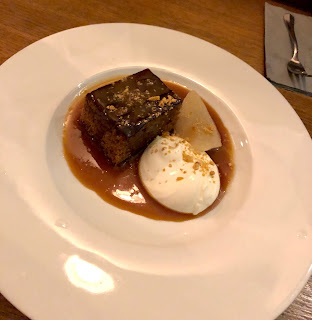 Go ahead to Day 4 of Ain't Europe Grand (Tour)

Go back to Day 2 of Ain't Europe Grand (Tour)