Kicking off a series of posts about 18 days of travel is sort of like heading off on the trip one-more-once, except now you know exactly how much attention-love-surprise you're going to have to spend on each stop before you get there. That's why it's good to open with a mostly travel day to settle in and find a rhythm. Chryss and I had the great fortune, thanks to her stepmom and dad's generosity (and her great achievement, finishing her PhD), to be guests on a Viking river cruise known as the Grand European Tour. That's Budapest to Amsterdam, Danube to Main-Danube Canal (sort of--consider that foreshadowing) to Main to Rhine. Think of it as the C+C Vacation Factory, "Everybody Castle and Cathedral Now" trip.

To get even more out of Europe, we got to add on the three-day Prague extension, which was particularly interesting to me since my mom was Slovak, so that's pretty close (I mean they shared a country conjugal bed for 75 years). I won't bore you with hours on a plane and more time in the Frankfurt, Germany airport than one should spend, or, as I thought of it, I managed to spend 4 hours in a German airport and avoided having a beer--see, I'm not a drunk! But we finally arrived in Prague at 5 pm their time, and we were out of time, trying to figure out where we fit.

One place was the fascinating Corinthia Hotel, completed just as Communism and the USSR influence was in decline, making it a sort of monument to the Moscow-based functionaries who no doubt stayed there when crushing some Czech hope was necessary. At 26 floors, it's easy to think of it as a small simulacrum of the building in The Towering Inferno, without the flames or OJ or Bill Holden or Faye Dunaway or Fred Astaire or Paul Newman (that was a weird cast). 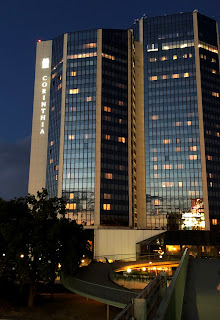 It photographs pretty at twilight, though. And our ninth-floor room in this borderline brutalist tower gave us a gorgeous view of Prague, too, even if most of the classic sight-seeable spots are a bit out of view's reach. Note it's a very green city, something Europe seems to do so well. To think they've been around for centuries, these towns, and didn't manage to chop down every tree. 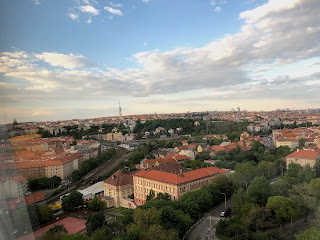 Not that we didn't have to figure out, at first sort of poorly, the not pedestrian friendly  traffic circle the hotel is built alongside as we walked to Vysehradsky Restaurant Kandelabr (that first part is just the Prague neighborhood name), as it was very close and our-travel addled brains needed something easy. Plus the very pleasant Viking driver from the airport, propitiously named George, suggested it as a good spot.Unlike the website, waiters did speak English, which also helped. (Of course in Europe, pretty much any person willing to sell you anything speaks English, even if they generally begin by saying, "I don't speak much English," despite doing so just fine.)

Kandelabr is casual, clean and clearly a local spot--as a Santa Barbara comp I'd suggest something like Benchmark. People are watching the world hockey championships on a big screen TV. Others look like they just came from work. The menu runs wide--there's even nachos, but c'mon, we know better than that. Instead, we start with what we must in Prague, Pilsner Urquell, which, maybe it's just vacation mind making me happy, but it seems to taste even better than any you get Stateside. Plus you get a half a liter for just about two bucks. How can you not drink much beer here? 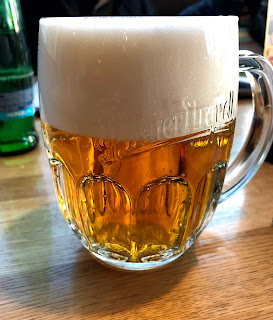 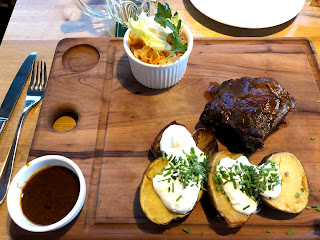 As you can see from the photo, that's basically as basic as it can get--meat and potatoes. And also sauerkraut, because you have to pay a special tax on any meal that doesn't include fermented cabbage. Think of the slab of been as the Czech equivalent of pork butt in Mexican food--cooked long and low and slow and deeply delicious, with a bit of a crunchy crust and what's sort of au jus if that didn't dandy it up too much. Think pan drippings. Yummy potatoes, too. It was a very nostalgic meal for me, with the kraut like the kind that would emerge from a crock in my Baba's cellar and that meat so overdone yet done right.

Speaking of overdone, flowers in the hotel lobby. Like I said, a fascinating place. 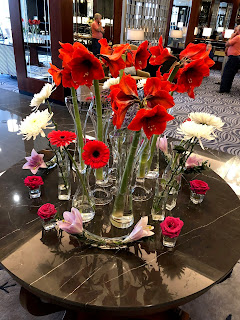