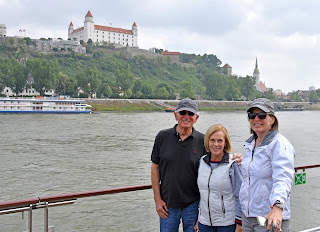 As anyone who has ever seen my desk at work knows, I'm a Slav through and through (ba dum bum). Ukrainian on my dad's side, Slovak on my mom's, I had never been close to Eastern Europe before this trip. So it was great to be in the Czech Republic for a few days, as the peoples there seemed sort of like my peoples. And while we bused through Slovakia on the way from Prague to Budapest, we got to sail through it on this day of our trip on the Danube. Above you see Roger, Judy, and Chryss below Bratislava Castle.

It's a fascinating city to Danube through, for you get lots of cool bridges, like the Apollo, site of James Brown's most famous concert. [concerned voice from off blog] Oh, sorry. It's actually named after a nearby oil refinery that stole its name from a god. Because, oil, well, you live now, you know. Cool true story amidst my dumb jokes--when they built the bridge, they swung the completed span out from the west bank like a giant lever. You have to love engineers. I am also glad I did not know this fact when I sailed under it. 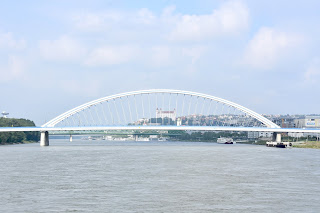 Then there's the Bridge of the Slovak National Uprising, or Most SNP (most means bridge in Slovak), or the New Bridge. They evidently don't like choosing names in Slovakia, making me think I need a few more for myself to live up to my heritage. I'm thinking Sir Yatch-a-lot and the Pun-isher. The best part of this bridge--beyond it being the world's longest bridge to have one pylon and one cable-stayed plane--is that disc that looks like it crashed atop the sole pylon. Here they have no problems with apt names, though--it's a restaurant called UFO. (Go see a view of this bridge in day 4's blog from a different bridge and a bus. I provide all the transit views, I tell you.) 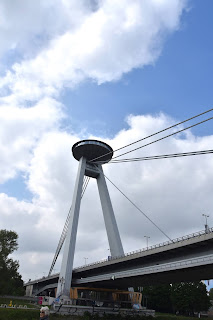 As for that Bratislava Castle, it's the kind of place about which Wikipeida writes, "The construction of a new castle of stone started in the 10th century." Uh, that's the new castle? Sadly, most of it got destroyed over the years, as might happen to even you if you were last new in 1000 AD, and your country changed hands like a pocket watch at a poker game in the Old West. They've been restoring it since 1957, bit by tiny bit, but it sure is impressive from the outside, which is the big goal of any castle, after all. 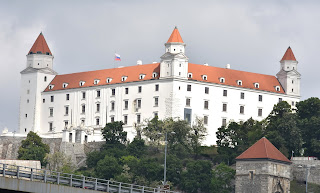 It's certainly better off than Devin Castle just a bit upriver from Bratislava, which mostly makes for great hiking (or so I can read on the web) and great photo ops. Napoleon's troops destroyed it in 1809, so it's got to be romantic ruins since. That's something to aspire to, like being an architectural Alain Delon, say. 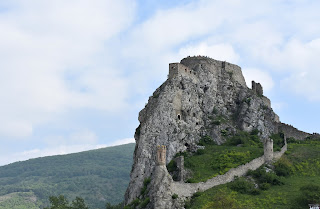 And to ruin the continuity, back down in Bratislava proper, there's the Stefanik Statue. Even Cleveland has a statue of Stefanik, one of the fathers of modern (Czecho)slovakia, a war hero, diplomat, aviator, scientist. It's particularly interesting as he's at ground level but then behind him on a tall white column is a lion that seems to think he's in Venice, probably because he can't read (I assume lions don't read) the coat of arms of the country that he's holding. 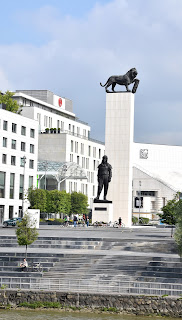 And I can't help but share this photo, of a billboard as big as a bikini is small. Amidst the old and new. And the surely ashamed Slovaks who hide under babushkas.

It's a bit of a haul from Budapest to Vienna, where we will dock for the evening, but Viking doesn't leave its passengers with nothing to do. Nope, first we get a German lesson from our Norwegian Program Director Stein Dyb. Do I remember much of it? Nein. But it seemed worth doing as we headed towards Austria and Germany for most of the rest of the cruise. And Stein was great at the classic goofy jokes, including playing videos like this one about the joys of German annunciation.

We also got a course in strudel-making from executive chef Alex Rosling, who might have proved that chefs are best in the kitchen despite what years of Food TV has suggested. The strudel we got to sample was divine, though, like the rest of his food.

So Show Me the Food, George!

How about some breakfast, featuring the made-to-order omelets you could get? 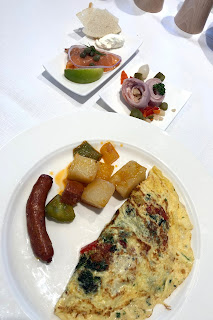 Yes, always, some breakfast fish, too. It was a cruise after all. I don't have photos of lunch. What an inept blogger. But I'll make up for it with dinner, kicking off with some perfect asparagus (we'd see plenty of it fresh in the spring markets, and those white asparagus--wow), with a wonderful sauce gribiche. Light and lovely. 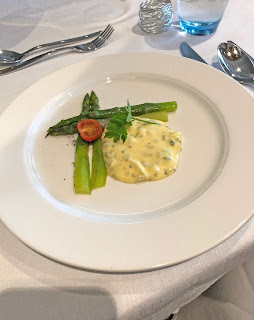 Chryss, salad-devourer that she is, went for the baby greens and watercress with grapes, walnuts, and Danish blue. 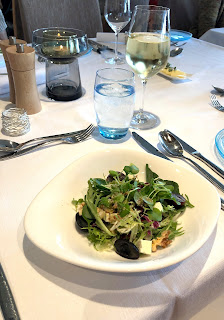 Again, bright and beautiful and fresh. The joys of a river cruise that can stock up on produce practically daily. She followed that with the seared scallops set off with perfect plate pairings--an earthy sunchoke mousseline, some pine nut gremolata for herbs and crunch, and an asparagus-radish confit for more bite and color. 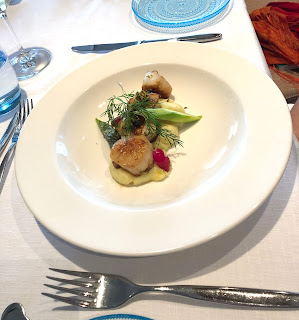 The rest of my evening was an exploration of the knödel, which are cute as a dumpling as they are just that. It's a general enough term it can go savory or sweet, so for my main I had a plate of knödel tris, one spinach, one bread, one cheese. All relatively light given, well, dumpling, and very tasty and distinct. 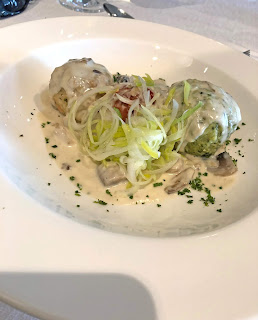 That shred of leeks atop provided just enough of an onion-y note without overpowering, and the brown butter sauce set the dish into a bit of further richness. Surprisingly good for three balls o' stuff.

Then my dessert was the sweet take on a knödel, namely a marillenknödel. Marillen, not over-the top like Manson, is actually more seductive like Monroe, not to mention the name for a very particular type of apricot happily in season as we sailed. Sweet but not too, and then cloaked in a bit of dough for extra fun. And, of course, a bit of cream. 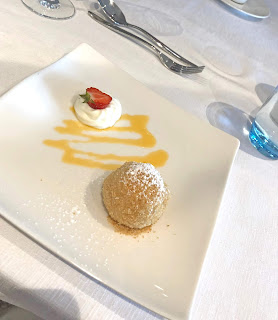 Since we docked in Vienna just before dinner, we knew we wanted to check some of it out that evening. It's kind of odd the Danube is a bit far from what's more "downtown," but it turns out it was just about a 20 minute walk to the Prater, a huge public park that once was the private play area for the Habsburgs. Within all the green is a shockingly large amusement park, the Wurstelprater, most famous for its Ferris wheel, once the largest in the world and big enough to lift Orson Welles as Harry Lime high into the sky to rant about the Swiss and the cuckoo clock. 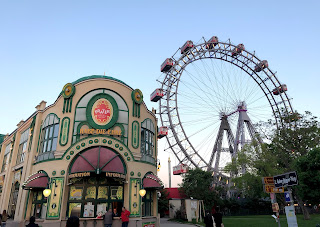 Turns out you can walk the whole park and pay nothing as long as you chicken out choose not to ride any of the rides. What's more, they even have stationary ride seats set up for photo ops, and since that was free and wonderfully immobile, we went for that option. 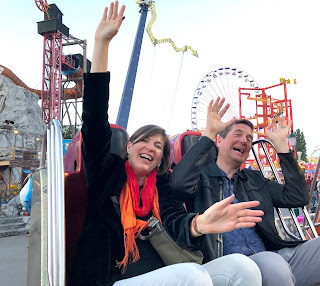 And reveled in all the dark ride entrances and artwork, the kind of stuff we only wish we ourselves could do more of each year around October 31. Heck, look at the name of one of the rides, and all the joy in some one's macabre-loving face. 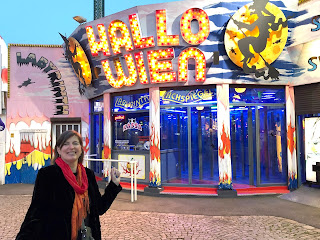 She got to "buy" tickets from this fine gentleman. 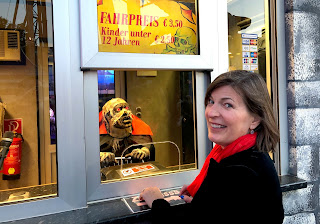 A friendly grope from this ghoul. 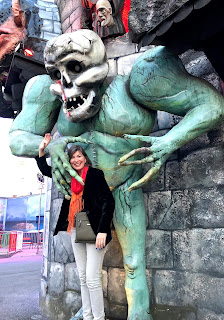 And a guiding light from this one. 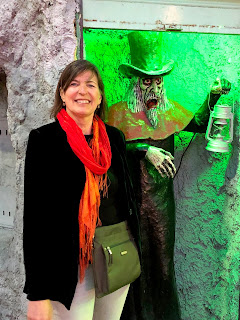 Meanwhile, I had either fun with the language or a naughty knödel knock. 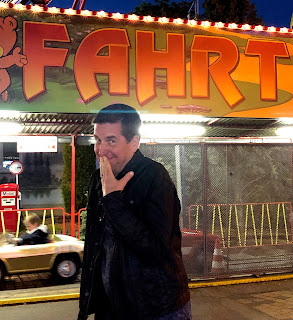 I hope I didn't anger the evil god of the Toboggan. 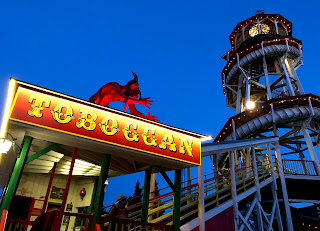 You have no idea how many photos from the Prater I could share, but it was wonderful, just to walk around. Especially when the moon decided to rise full and go for a rollercoaster ride. 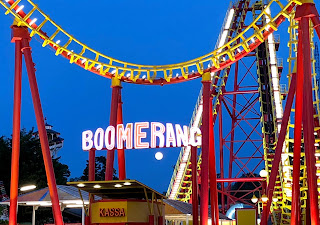 We get back to the Tir not too late, and learn a very important lesson as we walk by other cruise ships at the dock. Those thin scrim curtains all the rooms have? If you have a light on your cabin, everyone will be able to see you no matter how little you are wearing. Some sights cannot, shudder, go unseen.

So of course we had to hit the lounge to make up for that. Almost in Germany, and wanting to start light, I went with a classic, Paulaner Hefewiezen, with its grassiness and hint of banana and coriander. So refreshing. 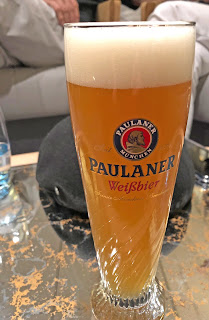 Then I tried a beer I'd never had. As an IPA fan (I live in California, so it's kind of a law), when I saw there was a German one to try, I had to get my hops on. Only 6.3% alcohol it's mild compared to most West Coast styles, and it was a bit rounder with its German malts, but now back in the States where we can't get buy it, I do sort of miss the marvelous Maisel. 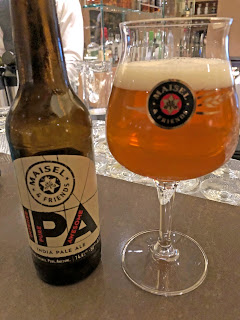 Go back and read Day 5 of Ain't Europe Grand (Tour) with Chryss and George
Posted by George at 8:16 PM