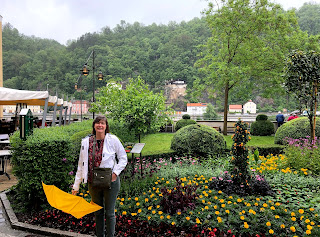 Today was our first day in Germany but the weather didn't recognize international borders. Our shore excursion is through drizzle+, depending upon the moment (Chryss above amidst flowers one of the rare breaks), and it turns out Passau is getting ready for flooding, so town crews are about installing the flood gates Danube-side. Here's Old Town Hall and some civil servant buzz. 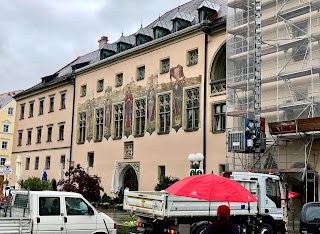 Passau is actually where three rivers meet, with the Ilz across the way from where we docked and then the Inn running into the Danube and making Passau perfectly pointy in a Pittsburgh kind of way. The historic portion of town between the rivers is hilly, with narrow "streets" and lots of great views. 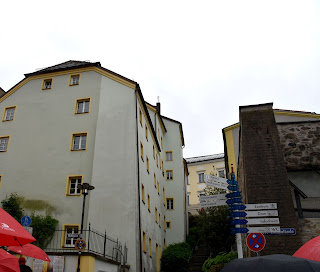 And slippery cobblestones in the damp, too. So there's lots of looking down when you want to look up. It's best to keep stopping and peek around, including around all the giant Viking-provided red umbrellas. (We are an easy to spot group.) The umbrellas do make for some challenging framing of appropriately gorgeous photos; here's the Domplatz (cathedral square), not looking as good as I want it to. 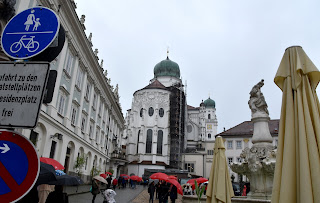 That said, it's an enchanting town, to say the least, from passageways like this one 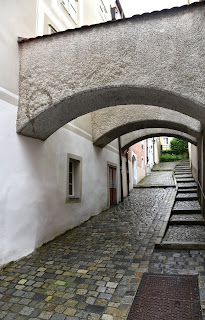 to a roofline asking for a photo 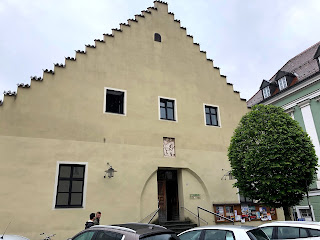 to signs on a fenced in yard at one house like this one, that makes me want to hug a hunde. 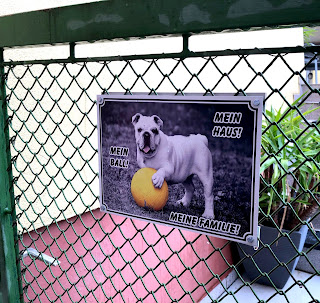 While not getting interior tours, we do get to see into a few buildings like the Bishop's Residence, which proves once again how humble the religious were, and how seriously they took their vows of poverty. Totally men of the people. 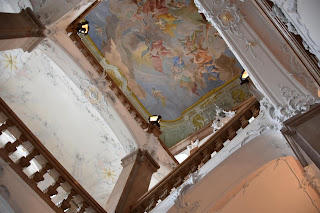 Luckily some of the old gods fought back, and Bacchus was well-presented here (never deny the power of the god of wine). 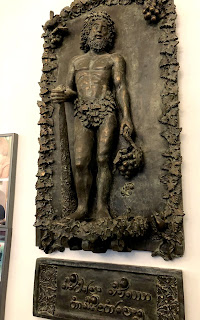 Since Passau is castle-less (there's a fortress, but that seems like such a step down) we make up for that by actually getting to hear an organ recital in its major cathedral, St. Stephan's. It's a crazy Baroque god-fest of a church, having been rebuilt in the late 17th century after the old one burned down. Here's a glimpse of one spire between the streets. 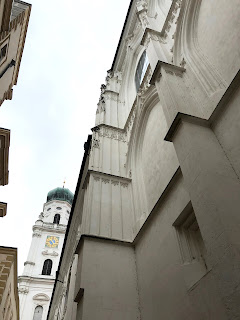 The organ is arguably the world's largest cathedral organ at almost 18,000 pipes. To be accurate, it's five separate organs, all of which can be controlled from one console, but that's supposed to give it even more character, if only because they get to write things about one of them like, "Over the long nave in the attic in a separate organ chamber is the 'Fernwerk' (echo division); its sound floats through grates (the 'Holy Spirit hole') into the nave." If you ask me, Holy Spirit Hole sounds like the name for a dive bar for clergy. 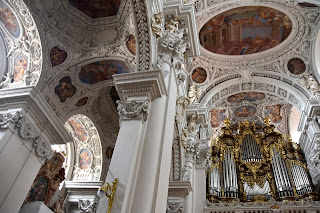 Our domorganist, as he was billed, for the day was Ludwig Ruckdeshel, who took us through a three-piece 20 minute concert that got ever more challenging (aka Modern!), so some folks, despite having to pay to get in, left before he had the organ let loose its final internal organ-stirring blast. We got some Bach, a self-"penned" free improvisation, and then some Jean Langlais that sounds like this if you want to hear a different performance of it.

All that time in the church didn't keep the river from rising, especially on the town's other side along the Inn River. As an American, can you imagine a scene that looks like this? 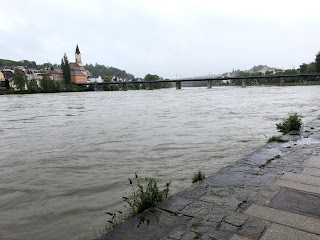 No railing, no warning signs, no life buoys. Raging river easy to step into and wash you downstream. Do they even have lawyers in Germany? Maybe instead of lawyers everyone has decided to be an artist. I'm down with that. They even have an Art Alley, Höllgasse, where the town cuts breaks for artists to have studios. Hey, Santa Barbara, give Passau a call. The route is marked with luminescently painted cobblestones, so you can't get lost. 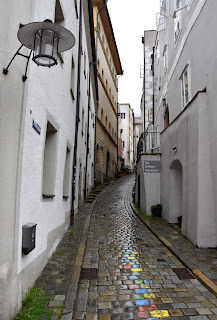 We get a few minuted to wander through on our way back to the Tir for lunch and our beguiled by this little guy, who has made the trip back to the States with us. The devil made us to do it. 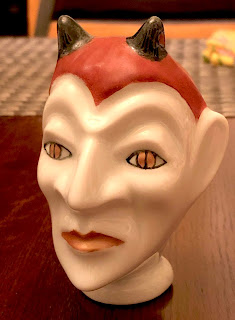 A Sailor's Life for We

Again, while the idea of eating at any of the ridiculously attractive spots in town itches at us, it's just too hard to pass up what awaits us pre-paid on the boat. Here's a host of lunch items, and note how many greens there are. You've got to eat healthy if you do that much eating. 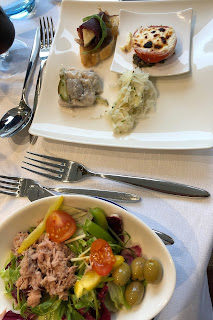 For instance, it's awfully hard to pass up dessert, which at home we rarely have even for dinner, but then for lunch it's an ice cream delight like this, doing a classic Germany choco-cherry combo for you. 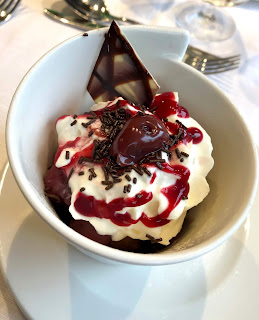 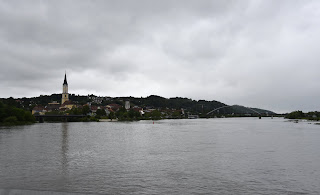 And so we don't get immediately to dinner, let's talk about what we drank that night. One of the better Viking rules is there's no corkage fee, so I'd been wanting to score some wine and have it with our dinner. In our post-lunch walkabout we found the terrific little shop Bachl Feinkost, which is sort of a bit of everything--cheese/charcuterie shop, wine shop, and wine bar. Seeing what were clearly locals enjoying themselves made me assume we'd found the right place and the owner was very helpful and spoke English, a plus for us with only our Stein-lessons of German to lean on. Most striking is the store seemed well-stocked with bargains. We chose an Austrian Manfred Gruber rosé that cost a mere 8.5 Euros. (Oh, the cabins all have little fridges, so keeping it cold was no problem.) 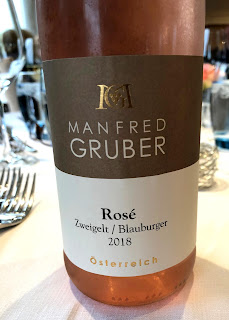 It turned out to be great for it's price, bright and refreshing, wild strawberry and key lime, and a mere 12% ABV. Lots of grip and great with dinner, even if I kicked mine off with something that could have used a heavier wine, rindfleischsuppe mit leberknodeln. Of course I just pointed. 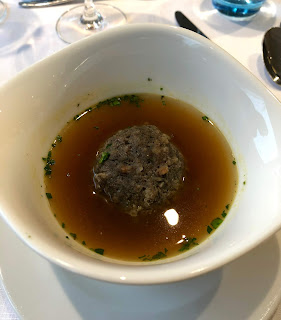 If you've been reading along you know your knolden by now--that's dumpling--but this isn't just any, it's a liver dumpling. Now, that might sound nasty, but this was tempered well, just organy enough to make it clear you were a bit offal. That edge was soothed by the soup, a rich beef broth. This isn't a dish I eat much in the U.S.

My main went perfectly with the steely rosé, though, a quite rich maultaschen, aka German ravioli with goat cheese and spinach and some extra creamy sauce since it wouldn't be rich enough otherwise. I did not call it Baron Von....

For dessert I went back to that choco-cherry pairing, but in donauwelle this time. Googling about to see other versions of this pastry, it often looks a bit more homey than the version the Tir served up, but that's the cruising life for you. How elegantly each layer is arranged. 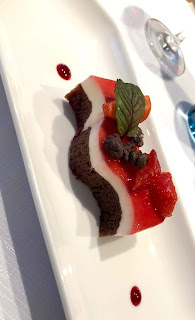 And then more dessert came, but that was sort of my fault. As you should know, this terrific trip was thanks to all the hard work Chryss put in to get her Ph.D.--it was Roger and Judy's graduation gift. It was clear the Tir crew liked to do little post-dinner celebrations, so I asked for one for Chryss and tonight was the night. Some sweet singing, some not so accurate spelling, but it was lovely all around. 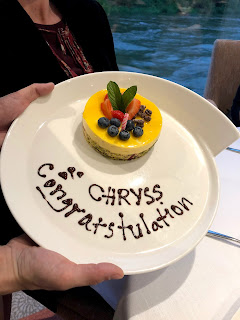 Speaking of the fearless crew, here some of them are, but it doesn't highlight the dining room crew that got to know your likes and dislikes and would deliver dinner with a sweetly sung, "Bon appetit!" 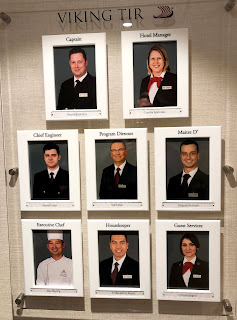 Or include head bartender Harris, who of course I had to befriend as early in the cruise as possible. You spend a lot of time in the lounge on a small boat that sails most evenings. Sure, you sneak out to get some shots of one of the first of 68 locks that we'd elevator through on our way to Amsterdam. 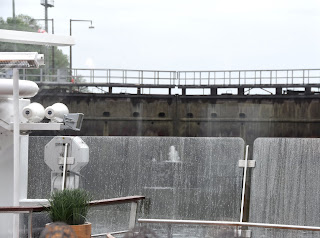 Meanwhile, back in the lounge, this is the evening Harris points out he realizes I care about beer in more than a guzzling manner and says, "Here's something we don't have on this ship." And he takes out this 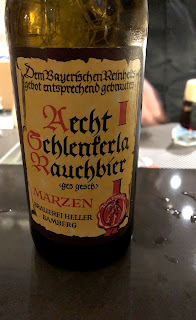 We are due to have time in Bamberg, where Schlenkerla is brewed, in a few days, but to get to enjoy some early is a surprising treat. Such smoky depth. Which we totally, didn't have. Thanks, Harris.

Go ahead and read Day 10 of Ain't Europe Grand (Tour) with Chryss and George
Posted by George at 3:01 PM