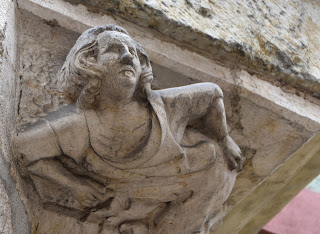 I'm starting with this photo as you are both no doubt astounded and a bit stone petrified by now that I've not continued the blog posts on our trip. In the meantime, welcome to Regensburg. (We are still in Germany. On the Viking Tir. Just in case you forgot.)

Water under the Bridge

There's more and more water under the bridge, so instead of just spending the morning in Regensburg, the crew decides we will spend the whole day, hoping things lower and we will fit under the bridges ahead on the Main-Danube Canal. So while the view out our cabin from our bed towards shore looks like this 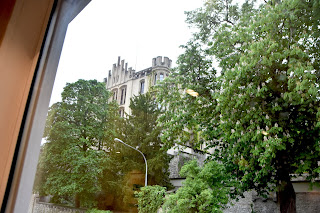 the river looks likes this 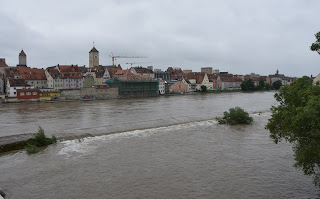 Not actually a problem for us, as we're on a ship so we won't flood, but a problem if we want to keep going. To their credit, Viking does very little to scare you about anything. They know how to deal, as we shall see in a bit. But for Regensburg it's a bit scary as it's got a bunch of river action that's clear from this cool brass relief map. 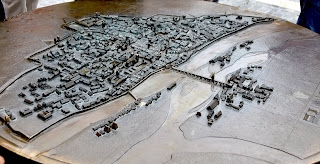 We do the usual included shore walking tour but also opt for the variation with some extra info about the Jewish communities in the area over time, and we do mean time. The first synagogue in town was built in the 13th century and made it until 1519 after the death of Maximilian, who protected the Jews. Once he was gone, they were expelled from town and a Christian chapel was built on the site. Today, there's this memorial built on the floorplan of the synagogue. 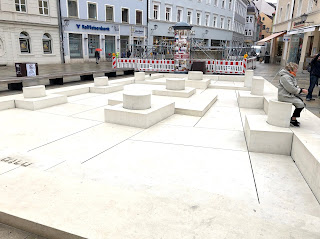 While Jews were allowed back into Regensburg, and had an architecturally notable synagogue built again in 1912, that one was destroyed during Kristallnacht. And what followed during the Holocaust led us to see the first of the Stumbling Stones memorials, artist Gunter Demnig's simple but affecting mini-memorials to many lost during that horrible time. (Talk about timing--learn more about these stolpersteine in a LA Times editorial today.) 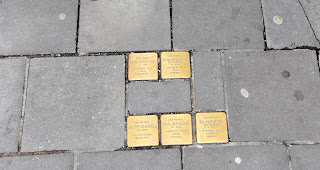 To think we can once again begin to demonize "the other" so it means nothing if our government kills them, and it's not even a 100 years ago.

Oh well, sorry to be a bummer on a vacation blog. Here are randy, wacky, Dali-inspired bodega signs, to show humans like life too. 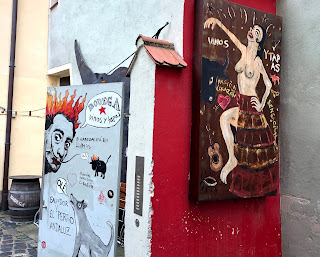 And like to drink, even if some people ruin it for the others. I also think it's notable this sign is written in English, sort of as if they don't mean their message for fellow Germans. 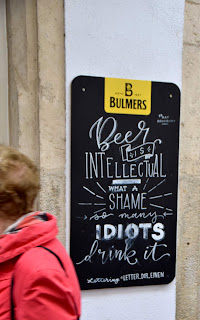 Or just like their signs to be fancy for no other reason than pretty (and to get your attention, sure). 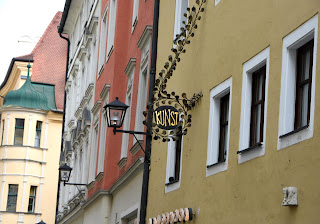 Regensburg was lucky to have avoided much WWII damage, so it remains one of Europe's best places to see medieval structures we haven't rebuilt every other century. Most famously there's Steinerne Brucke, a 1,000 foot long bridge over the Danube that got finished in 1146. You still walk on it, and even the swollen river doesn't hurt it. 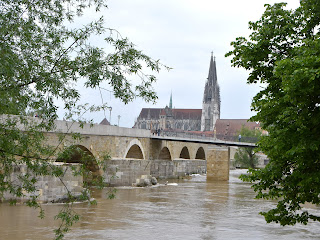 The bridge might hurt this guy sitting on it on a painful point, though. I never quite got the full story of this statue, and this version of him has only been around since 1854, so he's a veritable youngin'. 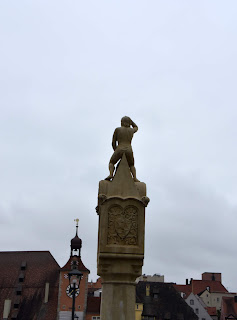 If medieval isn't old enough for you, the area was originally founded by the Romans, and sure enough there are ruins from them, too, from about 179 AD. 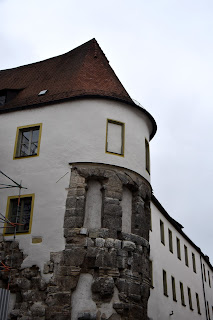 So I guess people have been building walls for a long time. If you want at least a reference to something older than that, there's this terrific mural of David and Goliath. 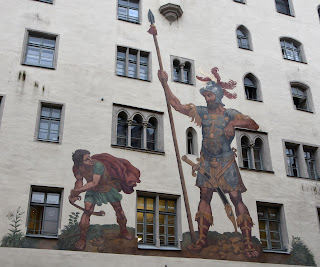 This mural is particularly fun as you get a first glimpse of it heading up a block between buildings. And I love how Goliath casually leans his left arm on the one window. And that frog on the far right is a nice touch. Otherwise Regensburg seems to just pose for photos--I call this one Very German Buildings. 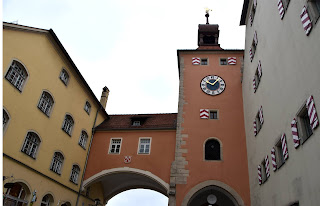 Yeah, sometimes they have a name, like the old town hall, which simply sings of political comment in German--the Altes Rathaus. Where else would the rats meet? 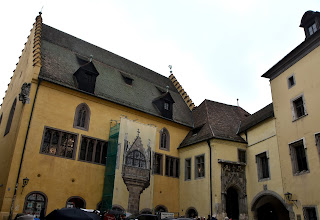 And then there's Baumburger Turm, one of the 20 remaining of what used to 60 palatial towers built to show off folks wealth in the 14th-15th centuries. Evidently the best way to appear wealthy was to pretend you lived in northern Italy. Still, a gorgeous survivor, you have to admit. 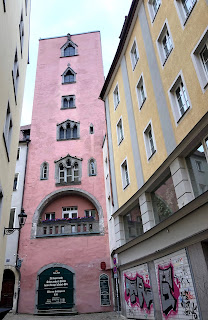 Meanwhile, some more charming streets and signs and clocks. They like their clocks, the Germans. 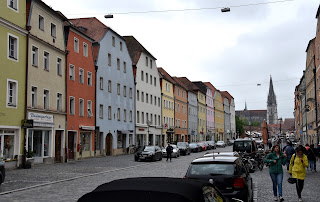 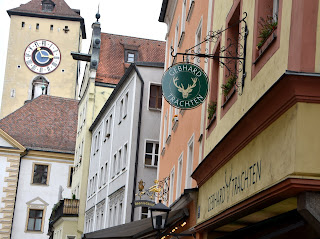 Of course there's a cathedral, too, Dom St Peter, some of which first started getting built in 1250. Years that sound more like AM radio stations freak me out a little bit. (And the millennials just said, "What's AM radio?") We don't go inside, but it imposes from the out, particularly where there is a Judensau (Jews' sow) statue in the form of a sow and three Jews hanging onto its teats; it faces in the direction of the former Jewish quarter. And people wonder how anti-Semitism gets codified. Sort of came ugly full circle there, didn't I. 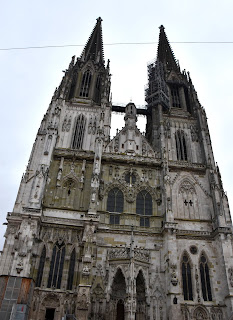 According to our original schedule, we should have been setting sail at noon for our next destination. Instead, we backed up and moved around a couple of peninsulas over, or at least that's how it looks on the very focused map I still have. Basically it means we're now on the far side of the land that's on the other side of Steinerne Brucke, so we have a good reason to cross it. And see the view, too. 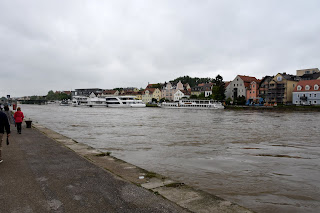 And while we sail, we eat, because this is a cruise and there are rules. Did I mention there's a pasta station every day at lunch? In honor of the Roman gate, I have some of that freshly dished up rigatoni alla romana. And some other things, like a smoked salmon roll and a "Russian Salad," which is potato, pickles, peas, carrots, egg and a mayo dressing, with a radicchio leaf and a beet blob for some color, and fresh dill because, well, if you need to know why to use fresh dill, I can't help you. 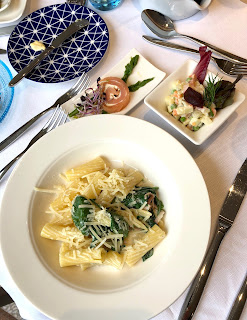 That left room for the pear tart Bourdaloue. A bit French for this part of the world, but all delicious. 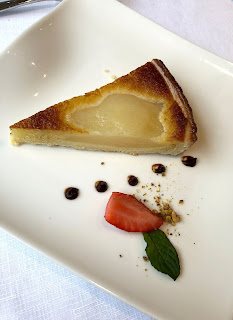 The Food between the Food

We did go back into town after lunch, wandering through some of the shopping areas, including a store I wanted to move to Santa Barbara called The Whisky Brothers (I'll give you three guesses what they sell and the first single malt doesn't count). We were good and didn't really buy anything.

But all that moving around got us a bit thirsty, and I'd been wanting to try some more of the local beer experience. Right on what was now our side of the bridge was Spitalgarten, almost awash with the rising river, but even more scenic than that. You have to walk a bit to get to it, so it almost seemed closed, but we pushed in to find a homey room filled with non-tourists. Gold!

Messing with their 800 years of tradition, I went for one of their newest brews, the Bio Roggen--both organic and rye malt, so a win win in my beer book. Alas, it's only in bottle, but still quite good for an easy-going drink. 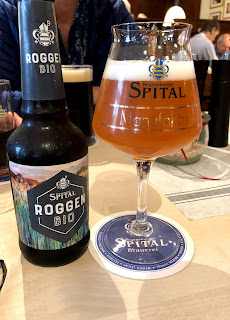 Of course, drinking without a snack is a mistake, and we don't make those. Instead we ordered Catherin's, a board filled with goodness and pretzels and bread on the side (plus, see Chryss's dunkel). 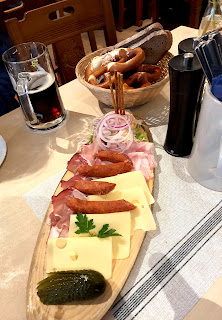 That introduced us to the joys of obatzda. Think of a German take on pimento cheese with some beer thrown in, of course. And aren't you proud of me to get this far before making a spit joke? (It didn't take me anywhere that long in Regensburg.)

The Last Food (This Evening)

Dinner time! (Time has passed, promise.) One of the best things about a Viking Cruise is you don't get dinner seat assignments, so you can find your favorite folks along the way and then just hang. This might take some trial and error, like the mistake of sitting down with anyone who says, "I'm not from the U.S., I'm from Texas!" It got worse from there, but the good news is you can dramatically leave a table of bigots after dessert  and not ruin the entire evening.

But then we did have the great luck/honor to meet Carol and Steven, and did our best to have them dine with us most of the nights. They were doing the drink package I talked myself out of, where you pay a bunch up front and then just drink, even off the wine list. Which I hadn't looked at by this point, because why torture myself, or talk myself into buying something. But when Steven ordered his wine for the evening, I had to look. So how fitting was it to find this as the opener. 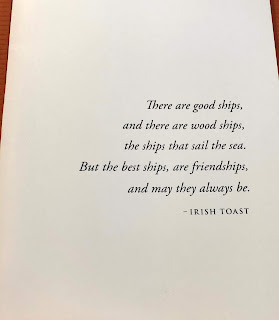 As toasts go, there are much worse. As friends to make on a cruise, Carol and Steven were none better. And we will hear more from them along the way....

Meanwhile, this evening's meal itself kicked off, for me, with a Bavarian forest salad (we are in Bavaria, if you didn't know), with plenty of mushrooms doing their delicious funky thing but not taking a very good photo. Still, a good, light way to kick off a meal (following a pre-meal of sausages and pretzels). 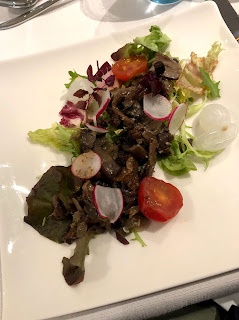 As usual I stuck with the regional specialties, and the main was a seared river perch getting to do a rustic take on surf-n-turf as the plate also featured creamy turnips (a great variation on just mashed potato, with its bit of taste tingle) and some glazed beets. 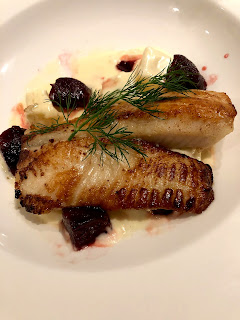 Chryss got to have the roasted vegetables and corn risotto special, which admittedly doesn't look too risotto-y, but it does look like something you want to dive into--the roasted corn and tomato and basil delivering on summer flavors surprisingly early, as it was a cold day out there in Regensburg. 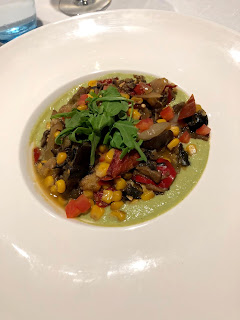 And, indeed, dessert definitely had to warm us up--it's heisse liebe, which translates as "hot love." Simple and perfect, some vanilla ice cream gets coated in crunchy nougat, dimpled with a raspberry and served on a plate with warmed raspberry sauce. Donna Summer did go to Germany and work with Giorgio Moroder for her hits, no? (OK, that's "Hot Stuff," but close enough for me.) 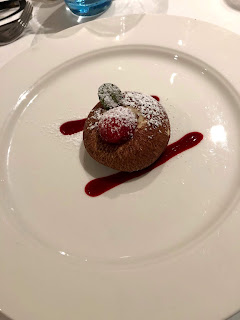 Go ahead and read Day 11 of Ain't Europe Grand (Tour) with Chryss and George
Posted by George at 11:10 AM