The World Is Sadly Less Sly 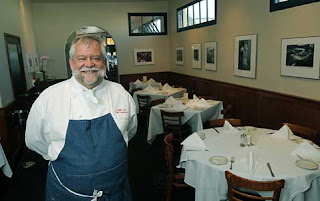 Chef James Sly passed away Friday night and the world is less delicious and less sweet. I wrote a very quick note for the Independent, but I could just keep writing, and in some way I already have, as I will get to.

In the meantime I need to share a story from Michael Graham, co-owner of C'est Cheese, which I got too late (thanks email!) to include in my Indy article: "When we were in the throes of construction on our expansion, we were having dinner at Sly’s and complaining about how difficult it was and how we had no money left. A few days later he and Annie show up in the middle of our Saturday morning rush and James calls me over. He calmly hands me this huge wad of cash and in a super casual voice says 'I’d like to purchase a $10,000 gift card please.' It truly really saved us. I loaded a card up for him and he (very) slowly used it to make purchases for Sly's for the next several years."

Here's the article I wrote about Sly's a year in that gives some of his background, too.

And Sly was the coordinating chef for the annual Central Coast Wine Classic's fabulous dinner at Hearst Castle for over 30 years. I had the delightful opportunity to volunteer for a bunch of those years, and wrote about the magical, Brigadoon-ish appearing and disappearing kitchen back in 2009.

Then, one micro look. The fried wonder that was Sly's half-and-half of onion rings and home fries.

You will be so very missed, Chef.
Posted by George at 8:50 PM