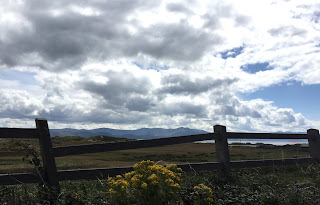 Let's get past the giggles to begin, shall we, class? Today's post is about Dingle. And the Dingle Peninsula. So wipe all the -berries and bad penis puns out of your head. There's a heck of a lot of beauty coming, starting with that photo above that's from the car, of all things.

Sadly, I caught the vacation cold pretty early in the trip, one that was just enough sick to be annoying (stuffy nose, post-nasal weirdness, a voice that would fade as they day did). Worse, I passed it along to Chryss (or maybe she got her own, I don't have to be so sick-centric, do I?), and hers slowly started to kick in at this point. And a cold for Chryss always manifests itself as a cough that scares bystanders..... We begin to worry about her ability to read loudly without hocking up a lung.

We left our Cork four-flight walk up, after being very proud we never backed the car into the Lee across the street, and made our way to our Dingle Air BnB. It at first seemed as if we were going to be far away from town, as we exited the "main" coast road well prior to Dingle, but the actual spot was in a housing area just above the town's main drag, a few blocks away. Our host had built a little apartment into his house for Air BnB purposes, and small yet lovely it was, a triangle of a room that was kitchen-living area, then one of the tightest of metal circular staircases to the second floor bedroom (guess where our luggage stayed?), and a "wet room"--a bathroom in which the shower was just one corner, so you kind of lived in a bit of a tidal pool if you used it.

That said, everything was spotless, relatively new, and labeled as if our host only expected slow people to stay there. Or maybe Americans.

It was a fine place--not to get ahead of our story, but we ran into our host walking his two collies the second night, and it couldn't have be a more James Herriot kind of moment (I know, Herriot's English, but still).

Given the trip to Dingle was only going to be two hours or so, and we didn't have to be anywhere that night for the PL-dog-and-poet show, we hung about Cork some as there's much to see--and eat. 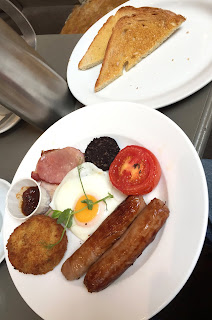 That's my serious Irish breakfast at Nash 19, and somehow I went for that instead of ordering any of the delectable looking baked goods they had--we figured a good breakfast could mean skipping lunch. Mine almost could have meant skipping dinner. That crusty potato at 8 o'clock on the plate nails what you want from something like that--crispy and fried on the outside, but not overdone or oily, rich and creamy potato on the inside, but cooked, too. I can't say how much I've been missing those broiled tomatoes for breakfast. And the black pudding, sure it's a kind of challenge food, it's main ingredient is pork blood, after all, but couldn't we all use some more iron? The flavor is strong, indeed, but the serving size is just right--a little goes a long way. Chryss had something that sort of looked like a breakfast burrito, which she really liked, but we're not going to talk about faux-Mexican in Ireland, are we?

Then we did dine in Dingle at the delightful Ashe's, once again taking advantage of the early bird option (another plus to skipping lunch--you want to sup early). Dingle, as a resort town, is a bit more expensive than Cork, say, so the two courses cost €26.50, but the meal easily lived up to that price. 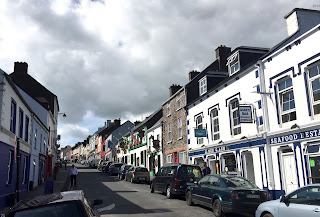 Chryss, working on trying every chowder Ireland had to offer, went that direction, and was mighty pleased. You can tell how rich it is just from the photo. 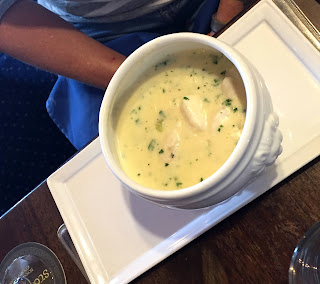 I had to have some local bivalves, so went with the three local oysters and half a Guinness option. 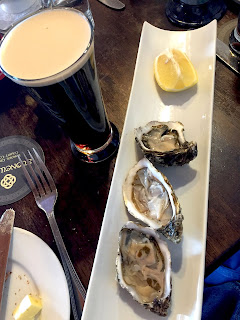 Just thinking of them I feel aswim in the sea, they were so bodaciously briny. Note there's no messing around with mignonette or horsing around with horseradish. Your supposed to slop these down naked. And they are all you want, beyond the liquor that sits in their deep-bellied shells, one more saline shot to finish with. And then to quaff some of the creamy Guinness as a kind of almost reverse palate cleanser....this course was utter simplicity and perfect.

Chryss kept it traditional ordering the fish and chips, but look at that fish! 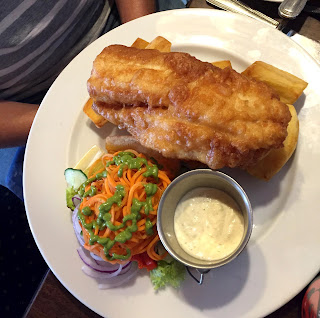 Here's that ugly bottom-dwelling haddock from the other day's market done oh-so-well. They bill at it as tempura of today's fish, and that lets you know the quality of the breading. And nothing is wasted on the plate, for the tartar was interesting and not just some mild practically mayo spread and the carrots were cleverly spiralized and then some essence of pea was extruded atop--peas and carrots for a sophisticated pub. (It's very much a pub turned restaurant, by the way, charming and comfy.)

I went for the other ugly fish I was enjoying about the island, hake. 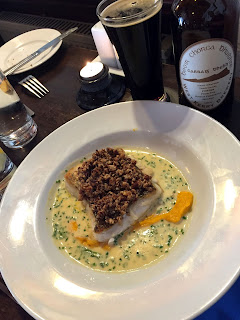 They certainly knew how to cook fish, just done but not even close to too much done, even with a pecan crust--there's something magical about the way fish fat and nut fat play together, if you ask me. It also sat in a pool of tarragon butter sauce, and that last word is important here--my guess is there was a fillip of cream too, as it was crazy rich. Plus, you can never go wrong with tarragon (and some chive, too).

One of our favorite meals of the trip, without a doubt, and that was even before finding out the place sort of has a Hollywood history--the cast of Ryan's Daughter anointed it their clubhouse back in 1970 (that's Robert Mitchum Sarah Miles, et al.), and it was the hangout for Gregory Pecker in Dingle. (You knew I wasn't going to avoid all the bad puns, no?)

Notice we skipped dessert, despite sticky toffee pudding on the menu. After all, we were full. But I also read up, as I'm that prepared kind of guy, and knew we needed to try Murphy's Ice Cream at some point. Which turned out to be as often as possible (we'd go back the next night, too, with our four friends, as it's good to be evangelical about deliciousness--share those calories!). 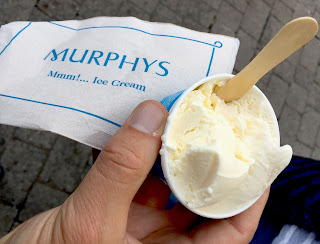 Remember Ireland often seems a land with more cows than people, hence so much great dairy. All of that greatness is scooped into the cup you see above. Easily the richest, creamiest ice cream we've ever tasted. But if that's not enough, the flavors they come up with. Chryss was fond of the two garden flavors for that week, a basil and a fennel. I had to have the brown bread, which was yummy, but my absolute favorite, especially since it brought another local product into the mix, was Dingle Distillery Gin. Now, I usually don't think I want dairy in my gin, but somehow this combo worked perfectly, the juniper essence lingering in all that butterfat. Two great tastes that turn out to taste great together. Get on it, Reese's!

While one of my dinner courses came with the half-pint, that Guinness sat alongside the beer I ordered with dinner, too, a Carraig Dhubh from Beoir Chorca Dhuibhne. Why yes, I did order it by pointing. Turns out those last three words mean West Kerry Brewery in Irish. A gorgeous beer, richly malty as a porter should be, but the roasted notes seemed particularly deep. Heading towards coffee, towards chocolate, but never arriving at either, it kept you wanting that next sip. In addition to loving the beer, I was even more pleased to later learn this: Adrienne Heslin is the first woman in Ireland who brews beer in her own pub (since 1993). You can see the bottle and beer with my hake.

After dinner we also scouted out the location for the next night's reading, Dick Mack's Pub. 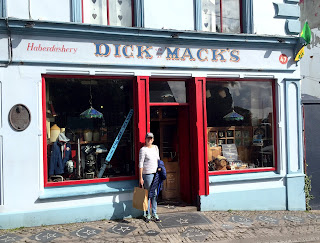 It's one of those oh so Irish spots--been in the same family since it opened in 1899, full of warren-y snugs and rooms, still partially a leather shop, still a spot where musicians just show up and round-robin some songs each evening. But, it also knows enough to step into the 21st century--there's free wifi, an impressive website, and now its own brewery, too, in the back of the yard which gives them an incredible outside area for people to drink in too. 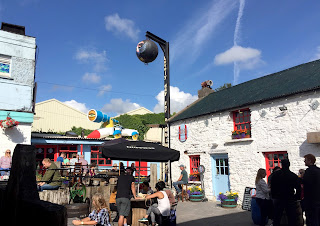 We had to sample their beers, of course, and in particular were taken with the session IPA, which reminded us of one of our U.S. faves, Founders All Day IPA. Leave it to the Irish, so used to drinking stouts at lower alcohol, to pull off the same with an IPA that still can please hopheads.

Let's rewind back to our morning still in Cork. As I said previously, the heart of the city is surrounded by two branches of the Lee, but there's also city north and south of that, so we decided to walk a bit to check out the Butter Museum, for we didn't think we'd get many other chances to visit a museum to...I feel silly finishing this sentence. Turns out it's not made of butter at all; there's not even butter sculpture. Although there is some bog butter, which could be a thousand years old. My guess is don't eat it. Of course, there's poetry, the smooth music of our old friend Seamus Heaney. A little verse to churn over, you might say. 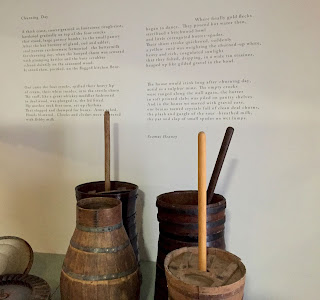 If you want your town to be attractive, put it on a river, by the way. The Irish have that down. 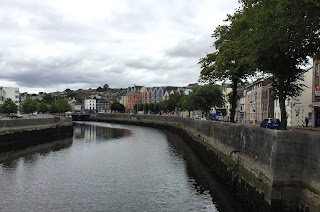 Or a little stream, like this one that winds through Dingle. That's some garden growing. 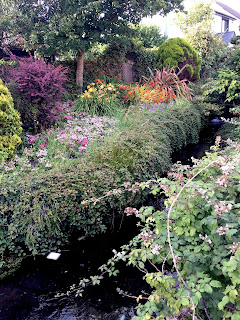 And if you have a big blank wall, don't leave it that way. 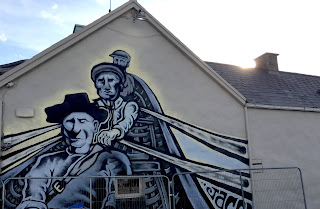 Just up the street from Dick Mack's is the Dingle Book Shop, and one of its features are these local poet postcards, one more idea I think Santa Barbara should steal, uh, borrow. 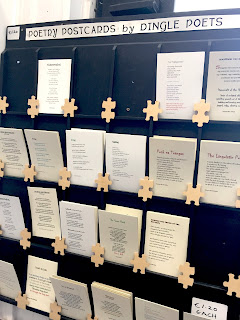 The we had to do one bayside selfie, especially since it features the sign for Dingle's most famous "inhabitant," Fungie. He's a dolphin that tends to greet all the tour boats, and everyone's a bit worried as he's getting on in dolphin years, but maybe he will live extra long as he's got a purpose in this world. Isn't that what we all need. 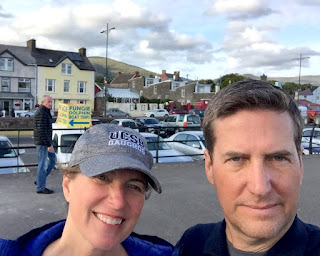 Or community, for later this evening we decided to go to the Phoenix Cinema--a single screen, an older building, the part that was supposed to save it, the video rental lobby, already emptied out and failed--and see the very moving Leave No Trace. It's a packed theater, filled not just with people but all sorts of "hi, how are yous?" This is not tourist town, but the Dingle of the people. Santa Barbara is a Dingle sister city, and it's quite like us in many ways--physically gorgeous (ocean and mountains, check), lots of pubs and restaurants given the size of the city, a sense there are people who actually live there and don't mind sharing but also want you to know it's theirs. 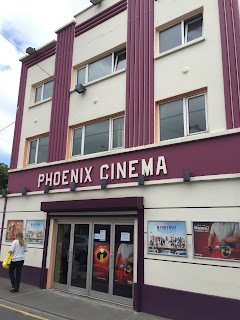 We got that full force at the Phoenix. It has enough space between its first row and the screen for a couple of folding tables and coffee machines, and it seemed almost like post-church service, not pre-screening, the chatter and communion and queuing up. It wasn't just coffee they were getting, that's for sure. It's also fascinating to see the movie is still showing (among others, but on a single screen, just different show times) over a month later--what is it in Dingle that draws them to this father-daughter tale, a struggle to discover how much social one needs, can have. What is it we can live with.