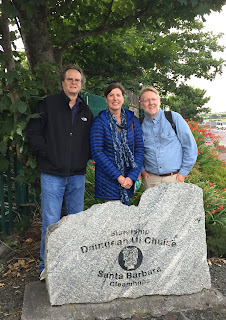 It's time to tell the tale of how this whole trip went down. Above you see PLs David, Chryss, and Paul and the rock that commemorates that Dingle, AKA Daingean Uí Chúis for those of you who handle your Irish well, is a sister city with Santa Barbara, whose Irish name is HowExpensive!? Now Santa Barbara is a tad profligate with its sisterhood--in addition to Dingle it's hugged Kotor, Montenegro, Patras, Greece, Puerto Vallarta, Mexico, San Juan Metro Manila, Philippines, Toba City, Japan, Weihai, People's Republic of China, and Blue Balls, Pennsylvania in its international sorority. (OK, I lied about one of those.) And at one point our now former mayor Helene Schneider was in Dingle, doing sister city things, and at Dick Mack's Pub, doing pubby things, and a poetry reading broke out. Helene, kind to her local poets, thought, "Hey, our Santa Barbara folks should visit here!" And then she told said SB folks.

David Starkey, man who accomplishes more than most mere mortals (many poems, textbooks, teaching, family, bands, St. Bernards, preacher--he officiated our wedding), took it on himself to put the itinerary you've been reading about together, starting with a gig at Dick Mack's but figuring if we were going to fly for eight time zones, we might as well do a few more gigs too.

The kicker is, the Dick Mack's reading turned out to be the least organized of all the events. When we got there that Wednesday evening for our 6 pm performance and asked, "Where do you want us to read?" the reply was, "Where do you want to read? The musicians usually play there," with a point directly across from the bar, where everyone has to place their order...and pick up their jaw from the floor after realizing the wealth of whiskey available. 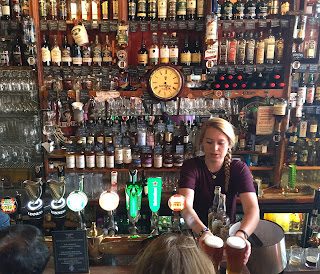 For some reason we didn't think that wise. So we wandered about a bit and found a side room we felt was abandoned enough/suitable. 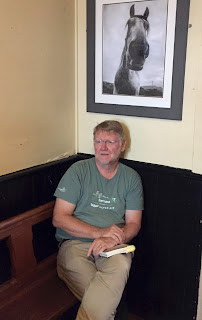 Alas, there had been no advertising of any sort, not a flyer amidst the Star Wars gimcrackery in the window, not a Facebook post, not a lonely poorly paid soul in a sandwich board stumbling amidst tourists. So our audience was us, and we were all sort of sick and tired of hearing each other--I mean, we love our poems, but we could sing along on many of them at this point of the trip. So that's one reason I got to read one, given I was not part of most readings. We opted to go for FB Live-ing the heck out of it, so the world might see us even if Dingle didn't deign to. The videos are all out there on our feeds, so go look if you want. I even read "Ode to an IPA" to my glass of Dick Mack's Session IPA, and have to admit I really felt the moment. Thanks, beer.

The good news is if the PLs ever put out an album, they have their cover, here. And that is David's guitar by Sandy, looking away. We wisely had her sing, too, which seemed more suitable for the rowdiness that didn't relent beyond our bardic brilliance. And at one point an Irish teen jumped in on one tune on bodhran--works better with a Lucinda Williams cover than you might imagine. 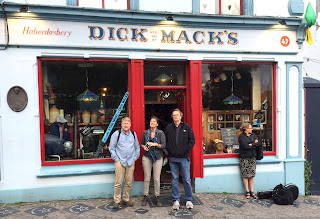 Same place. But here are some pictures, to give you a bit of a sense of what it looked liked, outside the place (even if the pictures were taken the next day when it was raining). Time is sort of malleable on the road. Especially when it's the Wild Atlantic Way. First, here's a view from one of the windows, with the distance disappearing into Irish mist. 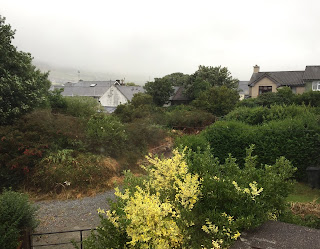 Then here was the courtyard we didn't have time to spend time in. 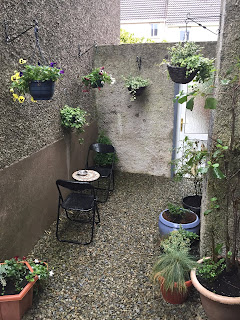 We bought stuff at a store--as there's nothing more fun than looking at odd foodstuffs in stores in countries not your own--for breakfast. Plus--cheaper! Then we had hoped to have lunch when we looped the peninsula's tip (oh, stop giggling) on our tour during the day, thinking we'd end up at Brick's Pub, home of West Kerry Brewery, just in time for lunch. And we did, but not for what they think is lunch--turns out 12:45 is way too early for a country kitchen to fire up.

So we got back to Dingle proper (let's hope there's not a Dingle improper) and hit the town, hunting. Finally ended up at Goat Street Social [no link as there's no website and even their FB page isn't working] on one of Dingle's main drags, a simple, direct, and pleasing spot for two very hungry travelers. It was my turn to go fish chowder--I'd been envious of so many Chryss had enjoyed--so ordered that, plus a rocket salad with feta, as peppery greens never hurt, especially tossed with cheese. 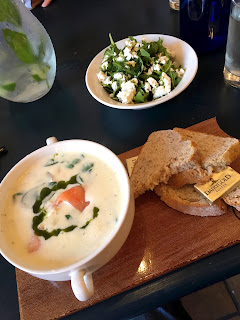 There's a place for food that hits its notes and doesn't strive for more. That place is in my hungry belly. Thanks, Goat Street Social. Chryss had a salad loaded with shrimp and she too, enjoyed. We also took a drinking break and just imbibed mint-ginger water, and you can see how just the pitcher look refreshing in the edges of these shots. 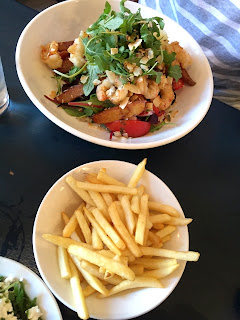 For dinner we all hung out post the non-reading at Dick Mack's, for if it wasn't a great poetry venue, it is a fine bar. Especially with the trailer the Beast awaiting in the courtyard to make us wood-fired thin crust pizzas. They were good if not amazing, but that's more because there's so much great pizza any more--how weird it is this "simple" food has become something to fret artisanal tears over if it doesn't make you think of what Pizzeria Mozza can do. (And now I want to go to LA post haste.) 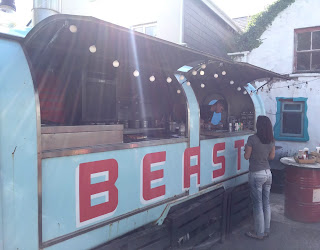 So West Kerry Brewery didn't have their kitchen open yet, but when at a pub there's still something else you can do. Pinball! Only kidding. I drank. I know you're surprised. Since I'd had the delicious porter I wanted to try one of their other brews so ordered the Cúl Dorcha, their red ale. It was good, but not the knockout the porter was. Might be because reds tend to be heartier here in the States (aka--alcohol--aoogha!), and this one was a practical piker at just 5%. Plus, I wanted food too. Fantastic interior, though. Can you spot the Americans? 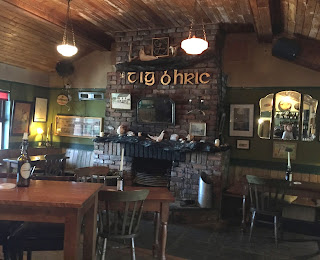 At Dick Mack's we consumed session IPA, because it wouldn't hurt us, but after feeling unloved as the reading thing kind of fizzled, I couldn't resist ordering a shot of Writer's Tears. It's mighty tasty, our misery, my fellow writers, as one review puts it quite well, "oodles of honey'd, fruity notes. Wonderfully easy to drink, it would make for a great introduction to Irish whiskey for folks new to the spirit. No writers were harmed in the making of this whiskey." Except, as we all know, writers are harmed all the time. I mean are you reading them? I think we all know, now.

Then after another Murphy's Ice Cream excursion the rest of the PL gang went off to do some musical carousing and the ever-sicker Chryss and I headed back to our Air BnB where this solid, non-spectacular beer awaited me. That's what you get for drinking a UK beer in the Republic? 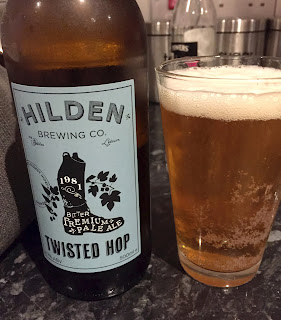 So as I said, that morning we took the loop about the far end of the Dingle Peninsula. Want to be blown away by the gorgeous, the historic? It's the ride for you. Stop one was Ventry Bay, a very horseshoe, very wide (perhaps it was low tide?) beach just west of Dingle. Sure, it was July 25, but there were still children in parkas on the sand...and folks in suits swimming. The Irish are tougher than you and me. 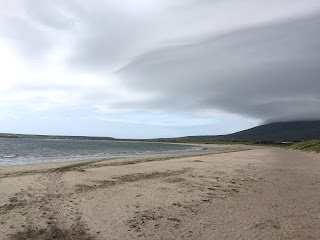 The view back towards more (emphasis on civil) civilization was like this. 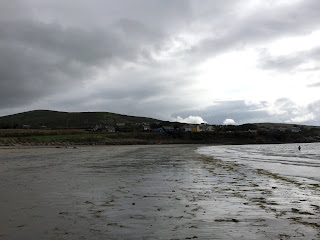 But, of course, what civilization is out this way is sort of like an unimaginably stunning 3-D game board of the Settlers of Catan. Particularly striking is that all of the historic sites--and we're talking centuries old sites--are, it seems, privately owned, so you pay some farmer five Euros to go see the fairy fort that his sheep and goats graze upon. 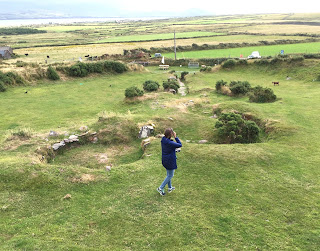 They're called fairy forts as something had to live in them after the Celtic warlords did back in 500 B.C. (We get all excited about our missions in CA. Such children we are.) You'll get a cup full of chow to hand out to the animals, too, so it's like a wicked time travel petting zoo. 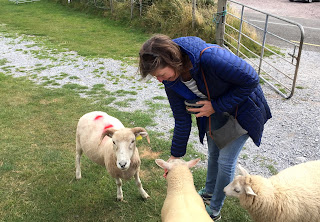 They are as aggressive as sweet things can be. 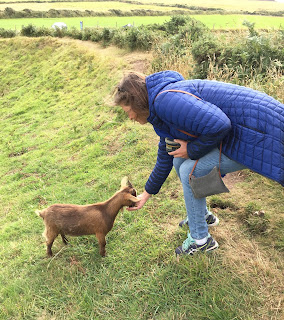 A bit further down the road you get even bigger remnants of the far past, the beehive huts that proved stone masonry goes back a long long time. 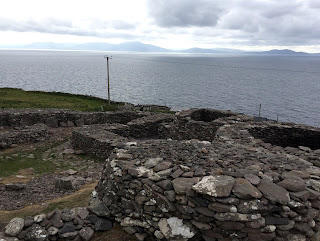 People are pretty amazing, you know? We claw and struggle and pile rock on rock to make our families safe against so much. Here's to at least the rocks surviving, and all that they attest to, preach for, stand against.

Then there's the storybook quality to what was life on Blasket Island, just enough off the coast to make the coast seem secure as the afghan your grandmother settled over your shoulders. The last settlers left in 1953, and when you hear of the tales, it's not so much it was hard--though it was--but that there was too much promise. Indeed, it turns out many of the people of Blasket ended up just heading further west, all the way to the U.S. There's a terrific Great Blasket Centre that captures what went on there, and given they sort of became an anthropological project, and there are many famous narratives written by its inhabitants, there's plenty to learn and know. (And, even here, literacy, story, the word. While we want to pretend in our country the folks have no sense of the literary.) All the exhibits end in a glass view of Great Blasket Island itself, a kind of church to a kind of world we've lost as much as any faith. 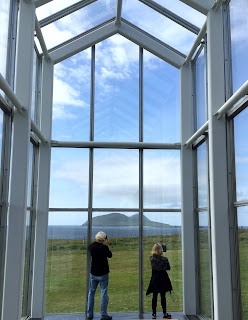 Here's the island unframed, if you prefer your own mythologizing. 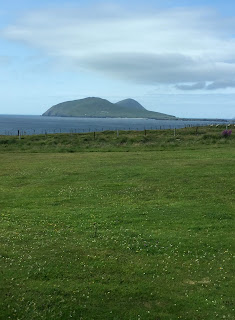 Really this section sohuld be endless photos, but trust me, it's about as gorgeous a landscape as any in the world. 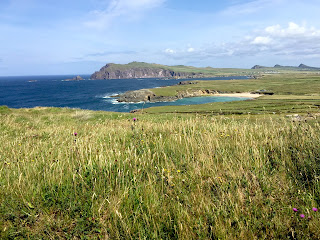 That's out towards Smerwick Harbour, and I'm pretty sure it's named beginning "sm" as that's just an ugly sound and it wants to dull its own stun. I mean, if you can take your eyes off the crystal blue sea, check out that little wave of ridges at the right, mountains on a stately march to the ocean. C'mon!

Or something like this, taken out of a moving car, the specks of birds just adding their own pointillist perfection to an already captivating scene. 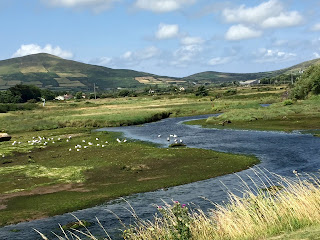 And now it's time for the religious portion of the program--at one point in the afternoon we went into St. Mary's, nearly across from Dick Mack's, as that's the two poles of Irish life, I guess, both held by a love of the word. Turned out to be a church more beautiful inside than out, a kind of humble grace. And even better, the stations of the cross were in Irish. 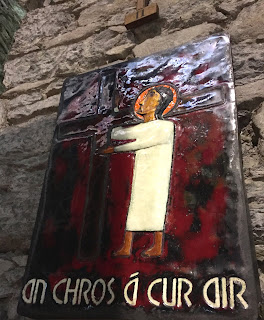